The logging crew made short work of the forest, tearing down the trees, yanking out the roots and feeding the branches -- just coming into bud -- into a shredder. 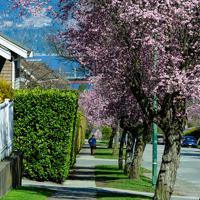 The forest, clearcut this spring to make way for the massive River District development in southeast Vancouver, was a wild tangle of cottonwoods and shrubs that made ideal habitat for woodpeckers, chickadees and hummingbirds.

The birds scattered as the trees fell. And migrating songbirds, such as the yellow warblers featured in the River District's promotional materials, now arriving in "bird friendly" Vancouver will have to look elsewhere for food and nesting sites.

The city says it is committed to creating "conditions for native birds to thrive" as part of Mayor Gregor Robertson's bid to make Vancouver the world's "greenest" city by 2020. Yet the urban forest has shrunk at an alarming rate, and it continues to shrink as condominiums rise across the city.

Two weeks ago several mature trees, including a giant fir, were torn out to make way for "unmatched westside luxury" at the Park 26 condo development at Cambie and 26th Avenue.

A block over at the southeast corner of Yukon and King Edward, another 100 trees await the chainsaw behind demolition fencing. It's a similar story block after block along the Cambie corridor as single family homes and walk-up apartments, many hidden behind tall leafy hedges and trees, give way to demolition, development and densification.

At Cambie and SW Marine Drive, a sequoia with a trunk more than one metre across, along with an enormous chestnut, an American dogwood, and dozens of mature maples, alders and hemlock trees are on a block about to be cleared for a tower of "first class living" in the W1 condos. Developer Concord Pacific did not respond to phone and email requests for comment on the pending tree removal.

"It makes me so sad," says Beverly Cunningham, a long-time resident in the neighbourhood, pointing to the forest of shiny towers rising around the SkyTrain station at Marine Drive. "It's all glass."

In the courtyard beside one of the new towers there is a nod to birds -- "300 Species Migratory Birds" is stamped into steel artwork celebrating the Fraser Delta, which is internationally recognized as critical bird habitat. There is not, however, a bird in sight.

Some species, like common nighthawks that used to swoop over City Hall hunting for insects, have all but vanished. Others such as woodpeckers, owls, thrushes, swallows, larks, hawks and warblers are increasingly restricted to the wilder edges of the city.

Until this spring, Vancouver's wild side included bushy groves of cottonwoods along Marine Way, some of the last sizable chunks of forest on private property in the city. Several hectares were cut to make way for the River District, billed as the largest development site in Metro Vancouver. At 53 hectares the development will include 7,000 residences, office and retail space, a school and community and daycare centres.

The city lauds the River District as "bird friendly," saying its "landscape design guidelines were written to ensure that songbird habitat is integrated into the design of this new community." Birds are singing on the colourful banners strapped to fences surrounding the dusty, noisy construction site. And realtors in the condo sales centre stress there will be 10 hectares of green space -- mainly grass and playing fields, which are great for people but not much use to most birds.

Plans also include a walkway beside the river. "There might even be bird sculptures like the ones in False Creek," says Suzy Kim, a sales manager for Wesgroup Realty Ltd.

There is no mention in the promotional materials of the forest cut down, or the fate of the birds evicted this spring.

Habitat destruction -- and for many species that means loss of mature trees, forest and "riparian" zones beside rivers and creeks -- is the leading cause of bird decline, a point stressed in Vancouver's bird strategy. It notes there has been a 35 per cent decline in native bird populations on the B.C. coast since 1970.

Few of the bird species native to Metro Vancouver are as adaptable as the crows, starlings and pigeons now thriving in the city. Conserving trees and nesting sites and "daylighting" streams would do much to help native birds live and navigate across the urban landscape, the strategy says.

Vancouver's green initiatives do include nature restoration projects -- such as Hinge Park on False Creek where red-winged blackbirds and beavers have taken up residence in a small pond, and the three hectares of new park announced last week to connect green spaces in the southeast corner of the city. But the projects announced to date are dwarfed by the deforestation.

Vancouver's tree canopy has shrunk by 400 hectares -- an area almost the size of Stanley Park -- in the last two decades, according to city reports.

Steps have been taken to slow the deforestation. A 2014 bylaw change and increased inspections to prevent the cutting of healthy trees have saved more than 2,500 trees, says a report to city council in December.

But it says "challenges" remain. Chief among them are the 2,700 mature trees a year cut to make way for condos, buildings, new homes and laneway houses, the report says. At that rate, enough trees to fill another Stanley Park could be lost in the next decade.

Developers are encouraged to save prime trees, but it is often impossible because the buildings are so large, requiring excavation of entire blocks.

Trade in for tiny trees

Under the "green" accounting system now used at City Hall, developers are not charged extra for ripping out huge mature trees, such as the giant fir felled on Cambie in late April. And "replacement" trees are usually tiny compared to the ones removed.

Fees for cutting trees "do not regard the size or condition of the tree that was removed," Molaro says, noting the fees "will not be increased for the loss of larger trees or lowered for smaller trees."

She says the "standard" replacement tree size is 3.5 metres high or has a trunk six centimetres thick. Most are planted in tight spaces around new condos and buildings, where they are meant to stay small. And up to 35 per cent of "replacement" trees die or are torn out within a year, the December report states.

When it comes to developers cutting and replacing trees, the city's "math doesn't add up ecologically," says community ecologist David Tracey, author of the Vancouver Tree Book released this spring. He says tall mature trees can have 70 to 80 times the ecological value of small trees.

Tracey supports the city's ambitious green goals but says developers should be required to do more to help achieve them. "If it is really going to be the greenest city there should be a more ecological approach to how decisions are made, an approach more in line with what city aspires to be," Tracey says in an interview.

He suggests that Vancouver create an "ecology czar" or committee to rule on whether developments fit with the city's goals and decide on appropriate compensation and action when trees are cleared. The czar could, for example, require developers to be more ecologically creative with building designs, or to set aside or pay for land offsite where new trees could grow to maturity. (The city wants 150,000 trees planted in Vancouver by 2020, but does not have access to nearly enough land to accommodate them all.)

"If we don't plant trees that will grow to size, to be these big mature majestic trees that we enjoy today because someone planted them 50, 80 or 100 years ago, we are going to be much poorer environmentally," says Tracey.

Molaro did not respond when asked if the city is considering asking developers to set aside land to help offset the deforestation. Nor would she say how many trees will be cut by developers this year.

But with block after leafy block being reduced to barren construction sites along Cambie and Marine Drive, 2016 is shaping up to be yet another big year for loss of trees and bird habitat in the city that aspires to be the "greenest" on the planet.