In a city changing by the day, it is easy to forget what Vancouver looked like last year, much less hundreds of years ago. Award-winning author J.B. MacKinnon, whose 100-Mile Diet, written with Alisa Smith, began as a Tyee series chronicling the year they spent eating locally, explores what nature used to be and might be again in his new book The Once and Future World. Short-listed for three nonfiction prizes including the Charles Taylor, which MacKinnon won for his first book Dead Man in Paradise, it was recently compared to Annie Dillard's classic Teaching a Stone to Talk by the New York Times, where it is described as "a beautifully written meditation on natural history and memory, full of new revelations about familiar landscapes and species." 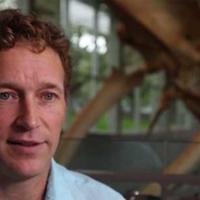 His hometown's past and possible future is what MacKinnon explores in an exhibit opening later this week at the Museum of Vancouver. On Thursday, Feb. 27 at 5 p.m., MacKinnon will give a free public lecture on "Rewilding Vancouver" at the University of British Columbia's Cecil Green Park House as part of the "Utopia/Dystopia: Creating the Worlds We Want" lecture series organized by the Creative Writing Program and Green College.

The Tyee recently corresponded with MacKinnon by email.

Vancouver is considered one of the world's beautiful cities. What did it used to be like?

"Vancouver is a surprisingly humanized place. This landscape was settled by Aboriginal people almost as quickly as it was revealed by the melting glaciers at the end of the Ice Age. That means the forests and sea we know today were shaped by human hands from the outset.

"If we leap to 1792, when Captain George Vancouver explored Vancouver Harbour, the first thing we'd notice is the presence of thousands of people from the Musqueam, Squamish and Tsleil-Waututh First Nations. But we'd also see sights that today we associate mainly with remote wilderness: grizzly bears, wolverines, wolves, herds of elk, old-growth trees taller than any that exist in Canada today.

"The salmon runs would be spectacular, but there would also be incredible spawning runs of other fish, like herring and oolichan. There would be a year-round, resident population of humpback whales, and 30-foot-long basking sharks in the Strait of Georgia. You might have seen a California condor fly overhead, flashing its nine-foot wingspan.

"In other words, an incredible intersection of human culture and wild abundance, with each influencing the other. And I love this detail from an early resident: in spring, every morning and night, the whole city thrummed with frogsong."

Can you talk about your attempts to connect with nature here?

"I put myself through a few experiments in reconnecting to nature as I wrote this book, but only one -- the first -- took place in Vancouver. I went to Trout Lake and spent a single hour just paying attention to nature. It turned out to be quite an experience. First off, I had always assumed the ducks on the lake were the usual mallards, but looking carefully I counted 10 different species. Then, suddenly, all the ducks went crazy on the water -- it took me a moment to realize a bald eagle was swooping in, hunting the ducks, which just barely escaped when they made it into the reeds. It was like watching a wildlife documentary, only better, in the heart of a city of two million people.

"What struck me most, though, was that when I looked around the lake, it was clear that no one else had noticed all the drama, and I'm sure I wouldn't have, either, if I wasn't deliberately paying attention. I realized then that the crisis in our relationship to the natural world is in large part a crisis of disconnection. If we don't care about nature, there's no way that we'll protect it."

In The Once and Future World you avoided a sense that all is lost. Was that a conscious choice?

"It was an honest outcome of the research I did for the book. I realized that we don't have to settle for what one biologist calls 'managed extinction,' or clinging to the last fragments of wilderness and last critically endangered species. We can remake a wilder world everywhere -- a much more demanding and inspiring vision to fight for. But the question of hope is an interesting one. Do I believe there is still hope that we can change our global culture's disastrous relationship with the rest of life on earth? Yes, I do. Do I see promising signs that this change is happening? No, I don't."

In Canada, we're destroying the libraries and science that produced the sort of research you used for your book. What are the motivations for that and what does that say about Canada?

"The motivation is quite clear: if we paid attention to independent ecological research, we would have to abandon the destructive ideology of endless economic growth and the short-termism of relentless resource extraction. I think what it says about Canada is that we don't realize how unique our situation is here.

"Speaking globally, the rarest and most valuable commodities we have in this country are a comparatively intact natural world and a culture that still has a strong relationship to nature. Our wild spaces are of international importance, and instead of recognizing this, the Harper government portrays ecologists as traitors for seeking support from foreign allies, while at the same time courts its own foreign allies to support pipeline development, tarsands mining and so on.

"Canadians have much to teach the world about living in a wilder world. For example, a lot of us still live on landscapes alongside large and dangerous animals -- an incredibly rare experience worldwide. Yet Canadians are paradoxical: we love nature, but also hang on to the myth that it is endless. It's that old line: You don't know what you've got till it's gone."

In a society hell-bent on expansion for humans, can we really turn back the clock? What would that look like?

"We can't turn back the clock to some specific version of nature from the past. For example, consider the fact that Vancouver didn't have earthworms until the colonial era, and now it has more than 20 introduced worm species. Are we somehow going to eliminate them all? So while the past has much to teach us about what a healthy ecological world looks like, I'm not talking about recreating the past, I'm talking about rewilding the future. We can use our growing knowledge of what nature used to look like to raise the bar on what we consider to be the 'normal' state of nature.

"I can't say what that will look like, but I take some inspiration from the development of our multicultural society. At one point, multiculturalism seemed threatening and unachievable to many people. It was demanding, and it continues to pose challenges. The result, though, has been the creation of a shared culture that is far most exciting, innovative and resilient than what came before. We can achieve the same kind of cultural co-evolution with other species, making more space for nature and rewilding ourselves in the process. The result would be a more beautiful, more fascinating world, and one in which our own species was far more likely to survive."