As New Democrat leader Tom Mulcair faces a leadership review at the party's convention this weekend, his biggest competition may be the premier of the host province. 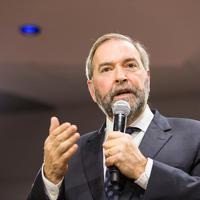 Who Stands Where on Mulcair's Leadership?

Alberta Premier Rachel Notley's speech to convention Saturday galvanized a contingent of western New Democrats, making the case that it's possible to have a thriving energy sector while also taking a progressive approach to climate change.

And she made a plea to New Democrats across the country not to turn their backs on her province's energy industry.

"I am asking you to leave here more persuaded than perhaps some of us have been that it is possible for Canada to have a forestry industry, an agriculture industry, a mining industry and -- yes -- an energy industry... while being world leaders on the environment," Notley said.

It was a rousing speech that echoed the energy of Notley's momentous May 2015 win, and a change of pace following a number of sombre and reflective sessions earlier in the weekend on the party's dismal 2015 federal election results.

In her speech, Notley framed Alberta as an example of a pragmatic, progressive route the federal party could follow in the future.

She said the Alberta New Democrats campaigned on a progressive platform and then implemented it after being elected, listing off the change from a flat tax to progressive, the removal of corporate party donations, and the investment of $34 billion into infrastructure.

She reaffirmed her commitment to implementing a $15 minimum wage and her dedication to public services, health care and education by removing the $1.5 billion in cutbacks the Conservatives had planned in the wake of a low price of oil.

But the speech also delineated some clear tensions and challenges for the federal NDP ahead.

The party is now caught in a difficult debate over the energy sector and progressive climate solutions, with the presence of 350 Alberta delegates at convention and a vocal provincial New Democrat government caught with unemployed Albertans in the resource sector.

The challenge was demonstrated in the divided reaction from delegates when Notley uttered one word: pipelines.

As the premier made her argument that her province needs pipeline construction to put hard-luck Albertans back to work, around half the delegates opted to sit, while others stood in applause.

It's a debate that has snaked its way into this convention held in the heartland of Canada's resource sector. Tomorrow, delegates will face the question of if and how to support the Leap Manifesto, a sweeping strategy for climate action that Environment Minister Shannon Phillips on Friday called a "betrayal" of Albertans who voted for Notley's New Democrats.

The difficult situation that Alberta's NDP government faces -- 60,000 people laid off in the resource sector in 2015, coupled with pressure to implement climate change solutions -- came as a surprise to some delegates from across the country.

"As an Ontarian, coming here and learning more about what's going on here in the prairies has been beneficial," said Ben Diaz, a delegate from Ottawa.

Diaz said conversations with prairie representatives on how the question of LEAP affects the Notley government has given him pause on the manifesto he was ready to support.

"What happened here with now Premier Notley has given the party an opportunity to reflect on the prairies and how they fit in the larger party, and the voice they have on some of our policies," Diaz said.

Deputy Premier Sarah Hoffman said she's hopeful the convention will show delegates the challenges that the Notley government faces, and said that Edmonton is a good place to host these discussions.

"People east of Ontario don't necessarily hear what we're doing out here in Alberta," Hoffman said. "Hopefully the 4.4 million people here are a little less strange" to New Democrats across Canada, she said.