Another scientific study has confirmed that fracking, the controversial technology that blasts apart low-grade rocks containing molecules of hydrocarbons, can contaminate groundwater. 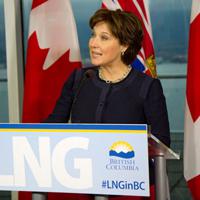 "We have, for the first time, demonstrated impact to Underground Sources of Drinking Water (USDW) as a result of hydraulic fracturing," says the study published in the journal Environmental Science & Technology.

Researchers from Stanford University published their findings after combing through publicly available data on the drilling, fracking and cementing of scores of tight gas wells in Pavillion, Wyoming.

"Given the high frequency of injection of stimulation fluids into USDWs to support [coalbed methane] extraction and unknown frequency in tight gas formations, it is unlikely that impact to USDWs is limited to the Pavillion Field, requiring investigation elsewhere."

No jurisdiction in Canada has yet set up long-term groundwater monitoring wells to track the movement of contaminants from oil and gas drilling into groundwater.

The researchers also discovered that industry fracked directly into aquifers at depths as shallow as 213 metres with highly toxic chemicals, including benzene.

The industry routinely contends that fracking is safe because it is occurring miles underground.

But shallow fracking of coal seams and other formations in Colorado, Wyoming, Alabama and Alberta from the 1980s onward has resulted in lawsuits, public protests and evidence of extensive groundwater contamination.

The new study also found that different companies in Pavillion, Wyoming used acid and hydraulic fracturing treatments at the same depths as water wells in the area. Waste disposal pits contaminated groundwater, too.

"Decades of activities at Pavillion put people at risk. These are not best practices for most drillers," said co-author Rob Jackson, the Michelle and Kevin Douglas Provostial Professor at the Stanford school. "There are no rules that would stop a company from doing this anywhere else," added Jackson.

In recent years, study after study has raised concerns about the impacts of both deep and shallow hydraulic fracking on drinking water, gas migration, badly cemented wellbores and earthquake hazards.

In Canada, hydraulic fracturing has turned previously quiet areas into landscapes rattled by both small and significant tremor activity in Alberta and British Columbia.

Canadian seismic researchers warned this week that the technology has caused so many tremors above a magnitude of three that "the likelihood of damaging earthquakes and their potential consequences needs to be carefully assessed when planning hydraulic fracturing operations" in Western Canada.

In addition, last year Painted Pony Petroleum, a B.C. natural gas producer, calculated that 130,000 wells might be needed to extract methane from the Montney formation in the province for liquefied natural exports. Such activity would require "two million possible fracs."

The Stanford study joins a host of other studies consistently finding problems with the technology.

A 2014 University of Texas study, for example, looked at 100 water wells in the heavily fracked Barnett Shale and found that approximately 30 per cent of the wells within 2.9 kilometres of gas drilling sites showed an increased amount of arsenic and other heavy metals.

An earlier 2013 University of Texas study suggested that elevated levels of strontium, barium, selenium and methanol in water wells near gas wells could be due to a variety of factors, including hydro-geochemical changes from lowering of the water table, or industrial accidents such as faulty gas well casings.

After Encana acquired and then fracked scores of tight gas wells in 2004 around Pavillion, residents started to complain about contaminated and foul-smelling drinking water.

The public complaints sparked years of controversy over what caused the contamination. When state regulators declined to investigate, the Environmental Protection Agency got involved.

Encana and industry lobbyists fiercely challenged that study and eventually forced the state of the Wyoming to take over the investigation.

Wyoming regulators concluded last year that fracking wasn't to blame and the water well contamination was natural. Encana helped to finance that study with a $1.5-million donation.

A recent critique by federal regulators accused Wyoming regulators of minimizing health concerns in their study and making unsubstantiated claims about the source of contamination.

"In summary, the data limitations and uncertainties... suggest a need for additional investigation to provide support for many of the report's conclusions related to fluid movement, gas source and well integrity," the agency wrote.

Scientific studies have documented contamination of freshwater aquifers by fracking or fracking chemicals since 1984. Fracking into water zones has been an issue for the technology since the 1950s.

Patents filed by industry note "it is not uncommon during hydraulic fracturing for the fracture to grow out of the zone of productive interest and proceed into a zone of non-productive interest, including zones containing water."

Industry has repeatedly covered up abuses of groundwater by offering landowners money and then demanding that they sign non-disclosure agreements.