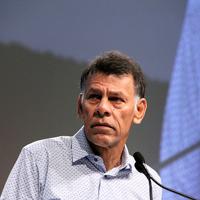 The Liberal government insists the signing is a formality and more studies are needed before it decides to support or oppose the agreement. Countries have two years from the date of signing to ratify the agreement, which will require a vote of Parliament.

That hasn't eased the NDP's outrage.

"Thousands of good-paying Canadian jobs are at stake and I refuse to sit idly by while the minister fast-tracks their pink slips," Ramsey said in an email to The Tyee Wednesday.

Canadian Labour Congress president Hassan Yussuff told The Tyee last month representatives of the new Liberal government said they had been unable to find any economic assessments done during the Conservative's tenure.

Ramsey said last week that it's inexcusable for the Liberal government to sign the deal if no assessment has been done.

"It's unbelievable to me that there are no facts, that there is no study," she said. "The Conservatives indicated that there was a study they based their whole TPP argument on. It's concerning to me there is actually not a study that exists."

Freeland said the government has already conducted consultations on the deal with 70 different groups. Her discussions have involved people who work on the shop floor of Canada's manufacturing industries, she said.

But Ramsey said she doubts the consultations included any of the 60,000 people the NDP alleges will lose their jobs if the deal is signed. She said there is particular concern the agreement could hurt Canada's car makers.

Ramsey said the consultations should involve the public, not just business, unions and other organizations.

Ramsey had an invitation for Freeland. "Come down to my riding of Essex and to southwestern Ontario and tour through the auto plants, the mold shops... the whole sector that will be impacted down there and to explain to those folks where the benefit is for the TPP," she said.

How to assess a trade pact

Michael Wilson was Canada's trade minister in the Mulroney government when the North American Free Trade Agreement (NAFTA) was ratified in 1993.

Now the chancellor of the University of Toronto, Wilson spoke to The Tyee about how assessments and consultations on the controversial trade deal were done.

NAFTA was in many ways an extension of the 1988 Canada-USA free trade agreement, Wilson said. Economic assessments had been done in advance of that agreement.

And Sectoral Advisory Groups on International Trade (SAGIT) would speak to people representing Canadian industrial sectors to listen to their concerns and ideas as the deal was being hashed out.

"We would have negotiators for the steel industry, for the textile industry, the clothing industry and so on," Wilson explained. "The SAGITS would have people from those sectors talking to the negotiator on the ground and that's where we'd get the specific impacts."

Wilson said the method was successful and helped negotiators, but stressed economic impact assessments are difficult to conduct. Economists have a difficult time accurately predicting the affect of a trade deal on the economy, he said.

Despite the difficulties, Ramsey said a thorough look at how the TPP could change Canada's economy is required.

Particular attention needs to be paid to the manufacturing sector, she insists.

"They need to study the impact on Canadian jobs," she said. "We want a real transparent consultation process that's been promised to Canadians."