The head of the country's leading labour association says he still has no idea how a major Pacific Rim trade deal will help Canadian workers, despite recent meetings with the minister responsible for the deal. 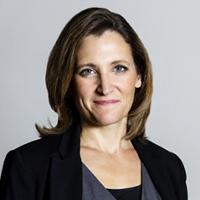 'Signing Does Not Equal Ratifying': Freeland on TPP

Hassan Yussuff, president of the Canadian Labour Congress, added that he doesn't understand why Canada is signing on to the 12-country Trans-Pacific Partnership when there are still unanswered questions about how it will benefit Canada economically.

Canada will sign the TPP next week, International Trade Minister Chrystia Freeland announced Monday, though she stressed that signing the deal does not mean it will be "ratified."

The deal has to be debated and passed in Parliament in order to be ratified.

Yussuff said the TPP would cost Canada thousands of jobs in the auto sector and pave the way for foreign firms to bring their own workers to Canada rather than hiring locals, among other impacts.

He said that recent consultations with Freeland did not make clear to him how other parts of the TPP could mitigate any negative consequences the deal has for Canadian workers.

Yussuff added that during those consultations he was told the Liberals could not find an economic impact study of the TPP done by the former Conservative government, which signed the initial agreement.

"I don't think (Freeland is) able to provide a clear response as to what she thinks this agreement will do to offset the concerns we're raising," Yussuff said. "We don't know yet, and I don't think she knows because she has no impact study to dismiss our concerns."

The TPP has also been criticized by investment arbitration experts as a gift to corporations that strips countries of their sovereignty to make way for business, while proponents say it opens up economic opportunities.

'Many Canadians' have questions: minister

In an open letter to Canadians published Monday, Freeland promised a full and open debate in Parliament on the TPP.

After 70 consultations, she wrote, it is clear "many Canadians" have questions about how the deal will impact the Canadian economy.

Those uncertainties are reason enough not to sign the TPP, according to labour groups.

The CLC said it was "disappointed" Canada would sign on to the TPP, and Unifor, the country's largest private union, said the deal was bad when it was first signed and it is "bad now."

In a press release, Unifor said Ottawa should also engage in full and open debate with Canadians, not just Parliament, before ratifying the deal in Parliament.

In Ottawa on Monday, Freeland told reporters she has spoken to those in Canada's labour sector, and not just union leaders.

"It's also been people who wear work boots, and that's very important to me," Freeland said, adding she met with car plant workers in Oakville, Ontario to talk about the deal. "We've been hearing a variety of views, some people strongly critical, some voice strongly supportive."

Freeland said that having an open mind is "critical to the process" of debating and consulting on the agreement.

But the United Steelworkers union characterized its meeting with Freeland differently in an email to The Tyee.

"It should be clearly noted that in no way has the government ever consulted with our union on the TPP," USW representative Alex McKinnon wrote. "Our union has attended two CLC sponsored meetings... but in no conceivable way, unless you're a Liberal, can this be taken as consultation."

Meanwhile, Yussuff said the Canada Labour Congress is drafting a document detailing its concerns with the agreement to forward to Freeland.

He said he appreciates that the minister is open to dialogue, a change from his dealings with the previous Harper government.

The Tyee asked Global Affairs Canada, the department that oversees international trade, if it was true no economic impact study conducted by the former government had been found.

No response was received by deadline Tuesday.