A British Columbia First Nations leader says the federal government's silence on the turmoil over the Site C dam in the province makes him wonder how serious Prime Minister Justin Trudeau is about his promise to treat First Nations issues as a priority. 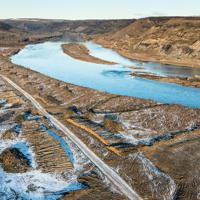 Grand Chief Stewart Phillip, leader of the Union of B.C. Indian Chiefs, said Ottawa's lack of reaction on the issue is "disappointing," and that the Liberals are missing a chance to show they are serious about reconciliation with Aboriginal people.

The massive hydroelectric Site C project, currently breaking ground in northern B.C., matters to both First Nations and landowners in the Peace River Valley, he said.

When completed, Site C would flood about 100 kilometres of the Peace River Valley near Hudson's Hope, much of it fertile land, and generate enough electricity to power 450,000 homes.

The B.C. government has said the dam is necessary because it will provide 100 years of needed and "affordable" energy to the province.

But that hasn't convinced its critics, who counter the power is not needed and that the project raises environmental, cultural and agricultural concerns.

Protests near the building site as well as three legal challenges to the project are ongoing, which critics say should be resolved before construction continues.

As a result, there have been growing calls by opponents for the federal government to intervene.

A request for comment on Phillip's concerns sent to the Prime Minister's Office was referred to Natural Resources Canada, and then to the department of Environment and Climate Change.

In an email, that department said it would not comment on Site C while it is before the courts, but that the government intends to oversee a robust natural resource sector while upholding indigenous rights in Canada.

But simply putting a stop to the project would not be so simple, said West Coast Environmental Law staff counsel Anna Johnston.

Johnston said both provincial and federal governments have jurisdiction over the dam, and many permits have already been granted from both governments.

"If the feds rescinded their permits, BC Hydro would have a right to ask for a judicial review of that," she said.

Johnston said the federal government is responsible for permits related to fisheries or turning rivers into non-navigable waters, while the province oversees construction and hydroelectricity permits.

Both governments have responsibilities to First Nations under existing treaties, she noted.

The Tyee contacted BC Hydro twice to ask if the project had any outstanding permit applications with the federal government, but did not receive a call back.

It's been a more than a month since Trudeau first revealed his government's five-point plan to improve relations between Ottawa and First Nations.

Announcing the plan, Trudeau said it was time for a "renewed nation-to-nation relationship" with Aboriginal peoples in Canada, including the implementation of the 94 recommendations from the Truth and Reconciliation Commission.

Phillip said the controversy over Site C is a good chance for Trudeau to prove he is serious about these commitments. "At least review the circumstances of the Site C proposal," he said.

Phillip noted the B.C. Utilities Commission, a regulatory commission, was never given the job of reviewing the project. The commission usually reviews projects that supply energy prior to them beginning construction.

He called Site C a make-work project that the provincial government is using to try to mitigate its economic failures, and said he believes most people in the province are against it.

The dam would impact fertile land, Phillip said. "Given the chronic drought situation in California and the rising cost of produce, it's incredibly stupid [that] the province would sanction the flooding of such valuable farmland."