People camping next to the Victoria courthouse say they'll stay until the provincial government works with them on long-term solutions to the housing crisis. 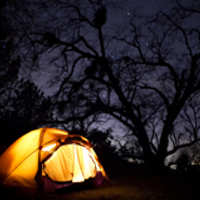 Responding to a Jan. 8 letter from the B.C. government asking the campers to leave, supporters said they are willing to fight in court to prevent the camp of 100 or so people from being disbanded.

"We believe this is an effort to hide homelessness and not solve it," supporter Ashley Mollison said of the government's efforts to move campers to a newly opened 40-bed shelter in an existing building on Yates Street run by the Our Place Society.

"We're here to speak out against the displacement of the Super InTent City residents, to say that not one size fits all and to also say that the solutions are here in the tent city," she said. "The provincial government needs to come and work with the members of the tent city to find lasting, sustainable, meaningful solutions to end the housing crisis in Victoria."

On Friday last week, as owner of the land, the Ministry of Technology, Innovation and Citizens' Services wrote to the campers. "While the province appreciates the complex issues facing campers at the site, a growing number of campers over the past month has created an increasing number of health and safety concerns, making the courthouse property not a viable location for campers," the letter said.

It encouraged the campers to move to the new shelter. "We would appreciate your cooperation as the province sees this as an important step towards returning the grounds to their original condition."

Tent is a home, says camper

Camping on public property is legal in Victoria due to a 2008 ruling that found it unconstitutional to prevent homeless people from sleeping on public grounds or erecting shelter to protect themselves when there are not enough shelter beds available for the number who are homeless.

A city bylaw requires tents to be taken down during the daytime, but it doesn't apply at the courthouse since the location is private property belonging to the provincial government. The camp has grown from a few tents in November to several dozen today.

"It's kind of a surprising thing for a man to call a tent on a lot his home, but it's more than just a tent somewhere," camper Nicholas Jewell said today.

The camp is a community, Jewell said. "Together we can keep an eye on each other, we can cover each others weaknesses and let our strengths grow so we become something more than just the individuals," he said. "We've got each others' backs here."

Many women have chosen to live in the tent city since they feel safer as part of the group, said Anna, a camper who did not provide a last name.

"We can resolve our own issues more effectively when there's more of us, and we can deal with them fairly and take into account each other's capabilities or downfalls," she said. "That we're still here out of necessity is a testament [to the fact that] that we don't find the current programs suitable to our needs, and we're far too many for them [to accommodate] anyways."

Joseph Reville, a camper who goes by CJ, said the camp has continued to grow despite the opening of the new shelter at a reported cost of $400,000.

With some support from the government, the campers could look after themselves, he said. "Where do these people go if you come in with bulldozers and cops and sheriffs and stuff, what happens? Because we built something pretty awesome, and we did it without half a million dollars."

The campers are visible, but there are some 40,000 people in B.C. who are homeless and another 65,000 who are at risk of becoming homeless, Mollison said.

The minister responsible for housing, Rich Coleman, was unavailable for an interview.

"The Province continues to work closely with the City of Victoria to look at options to assist the campers currently situated at the courthouse," a spokesperson for the ministry said in an emailed statement. 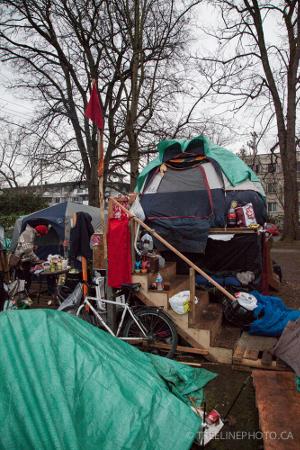 The courthouse camp has grown from a few tents in November to several dozen today. Photo by Pete Rockwell.

"We encourage the remaining campers to seek assistance from outreach workers who have been on site daily providing information on shelters and services available in the Victoria area," it said. "Forty rent supplements have been made available to help any campers in need of housing find a place to stay in the private market."

Including the new shelter on Yates Street, the province is spending $600,000 this year for winter shelter spaces in Victoria, it said. The province also spent some $19 million to help some 5,100 low-income households with housing, it said.

Government policies have created the housing crisis, said Kelly Newhook, the executive director of the Together Against Poverty Society.

"Inaction and a seemingly callous disregard for people living in poverty from both the federal and provincial governments has created a situation where we have begun to take homelessness for granted," she said.

Income and disability assistance rates have been frozen since 2007, she said. That means the government provides $375 a month for rent in a city where an average bachelor apartment costs twice that much.

"This creates homelessness," she said.

Meanwhile, since 2004 the government has allowed landowners to raise rents by 47.9 per cent, Newhook said. "(Having) no meaningful rent control creates homelessness."

The government talks about the availability of rent supplements, but with a vacancy rate of 0.6 per cent in Victoria it is difficult even for people with good jobs, a clean credit history and strong references to find a place to live in the private market, she said.

The province, which had an unanticipated budget surplus of $1.68 billion last year, could reverse the housing crisis by increasing welfare rates, restricting rent increases and investing in social housing, she said. "Spend this money where it's needed, on our most vulnerable citizens."

Citing the 2008 Victoria camping case and other more recent rulings, Newhook said the poverty society has engaged a lawyer to support the campers. "If we have to go back to the courts to protect the rights of the homeless we will, but it would seem indisputable that government's resources are better spent elsewhere."

John Lafrance, another camper, said it's important that the campers are visible and that with a little support they are capable of much when working together. "We are part of the solution," he said.