In a gesture to British Columbia's lower-income residents, the government last month ended a much-reviled clawback on child support payments. But it did not increase general welfare rates. In fact, income assistance rates haven't budged for eight years. 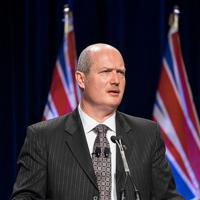 BC Budget: Average Families Left Out?

And the province's finance minister has no immediate plans to raise rates.

"We continue to examine the rates," Mike de Jong told The Tyee in an interview. "As our financial health improves, it's an area that we may acquire more of an ability to address. We haven't found ourselves in that position to this point."

That's no comfort to Ted Hawryluk, a long-time recipient of disability benefits who lives in Victoria. "You'd think they would have at least pegged us to inflation," he said.

The income and disability assistance rates were last raised in 2007. Individuals with a disability receive $906 a month, while someone receiving regular welfare gets $610 a month.

After rent, electricity and phone are deducted, which have also steadily increased, Hawryluk is left with $56 a month. He has a degenerating bone disease that prevents him from doing the kind of physical labour he did when he was younger, but he nets about $12.50 a day selling the Megaphone street newspaper.

"I'm hungry most of the time," he said, adding he uses food banks and other charitable sources of food. He said he spends about $2 a day on ground beef. Asked whether he could make it by on just the government's assistance, he said, "I'd be dead of starvation. I'm a carnivore. I've got to have my meat."

In the budget announced Feb. 17 -- after months of pressure from single parents, advocates and the opposition NDP -- the government reversed the policy that stopped families headed by a single parent from keeping any child support payments from the non-custodial parent. Any payment was subtracted dollar for dollar from the family's monthly welfare cheque.

The government estimated the change would help some 5,400 children in 3,200 families. But it would also cost the government about $13 million in lost revenue. Some of that shortfall will be recovered through $4 million in cuts to the Family Maintenance Enforcement Program. That department is responsible for ensuring that support payments are made.

Advocates welcomed the end of the support clawback, but are worried about the effect of the reduction to the maintenance enforcement program.

"We've been celebrating the victory," said Trish Garner, community organizer for the B.C. Poverty Reduction Coalition. Garner said a welfare rate raise for all recipients is long overdue, adding that it would have a significant impact on the roughly 180,000 British Columbians who now depend on benefits.

"We'd have loved to see a significant raise in the welfare and disability rates," Garner said. "From my position, it's unreasonable the government can expect people to survive on such a small amount."

De Jong said the government considered a general welfare increase instead of ending the support clawback but decided that the difference made to people would be insignificant.

"Had we taken the resources we allocated to that initiative and spread it across the entire spectrum, the increase would have been very, very small and would not have addressed the problem that people had identified," he said.

"Even in 2007, welfare was totally inadequate," Hopwood, the co-ordinator of the advocacy group Raise the Rates, said in an email. Eight years since that last raise, "they are worse off due to inflation," he said.

To keep pace with the rising cost of goods and services, regular welfare would have had to go up by $83 a month and disability payments by $123 a month, Hopwood said. That's based on a Canadian national inflation rate that likely underestimates the impact in Vancouver where rents have soared, he added.

Between 2007 and 2014 the "all items" Consumer Price Index, which refers to eight major areas of spending which are considered necessities, such as food, shelter and clothing, rose by about 12 per cent nationally and eight per cent in B.C., according to Statistics Canada data.

Meanwhile, Garner estimated it would cost about $300 million to raise all monthly welfare payments by a few hundred dollars each.

However, Garner compared that cost to the $227 million in revenue the government gave up by cutting income taxes for people who earn more than $150,000 a year and noted the operating surplus for 2014-15 is approaching $1 billion.

Asked about the failure to raise welfare rates since 2007, de Jong said, "A lot of that has to do with abilities to pay and how those costs accrue year over year."

The government recognizes the challenges people who rely on social assistance face, he said, "which is why we do our best to create employment opportunities for those who can work."

Indexing welfare rates to keep up with inflation is an attractive idea when the cost of living is rising slowly, but could be a problem if prices start going up faster, de Jong said.

"Governments got into a lot of trouble in the 1970s, early '80s, by tying expenditures to things like rates of inflation," he said. "One needs to be cautious about those sorts of things."

"When there's inflation the cost pressures individuals face go up as well, but at the end of the day, the government, the cabinet, the finance minister, are answerable for decisions to increase or not increase and that won't change no matter what the formula is," he said.

The NDP's critic for social development and social innovation, Michelle Mungall, said it's time for the government to review welfare rates. "Every single measure of poverty and basic needs of living show the rates of welfare are woefully inadequate in this province."

B.C. has had the highest level of poverty in Canada for much of the last decade, but is the only province without a poverty reduction plan, Mungall said. "With the clawback, people saw an injustice and they wanted to see that change," she said.

As people learn more about poverty in their communities they realize there's also an injustice there, she said, and will want to see that broader change as well.