A new federal program to help small and midsize businesses increase exports is unlikely to ease fears about a growing trade deficit and the impact of the proposed Trans-Pacific Partnership free-trade agreement. 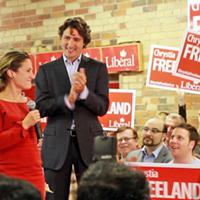 But Unifor economist Jordan Brennan said the program won't have any real impact on the growing trade deficit, which widened to $2.8 billion in October.

The CanExport program will provide up to $10 million a year in grants for small and medium-sized businesses to fund initiatives aimed at increasing exports. It targets companies with fewer than 250 employees and revenue between $200,000 and $50 million. The government will match company spending between $10,000 and $100,000.

The government said the program will help "hundreds" of businesses over the next five years.

But critics see a much greater impact from the Trans-Pacific Partnership, a trade deal between 12 Pacific Rim nations. They warn the agreement will increase the trade deficit, reduce employment and funnel profits to the wealthy. The former Conservative government signed the agreement, but Prime Minister Justin Trudeau has not said if his government will ratify the trade deal.

Opponents include the United Steelworkers Union, which issued a release in December calling for its defeat before it is finalized.

Unifor's Brennan said he hasn't reviewed the new CanExport program, but efforts to shrink the trade deficit through small business exports are futile. Ottawa is just "sweetening the pot" for business owners without getting much in return internationally, he said.

Companies with around 250 employees might make a contribution, he said, but smaller operations have little export potential.

"We've got this obsession with small business and we're doing everything we can to boost small business," said Brennan, whose union represents about 300,000 employees across Canada. "But it does not seem to make very much sense."

Brennan said it would make more sense to assist larger companies that tend to pay higher salaries and have more employees in expanding their export capacity.

"Canada's problem in terms of our business ecosystem is growing firms from medium-sized to large-sized," he said. "Growing them from regional and national players into international players -- that's the big challenge."

But Philip Turi of the Canadian Manufacturing and Exporting Association said that while the program won't end Canada's trade woes, it will help the economy. The association worked with the Harper and Trudeau governments on the program, Turi said.

Turi said about 40,000 small and medium-sized enterprises (SME) are exporting and 11,000 are shipping to emerging markets.

Turi said the funding will help small and medium Canadian businesses reduce their reliance on the Canadian and U.S. markets.

He said companies can use the federal funds to attend trade missions or do research in export markets. Businesses need to be prepared and have a clear strategy to use the money effectively, he said. Turi said applicants will have to show they have an international business development plan when they apply for matching funds.

Trade deficit numbers are considered an indicator of the strength of a country's economy. Imported goods mean fewer jobs within the country, increased international borrowing and a weaker currency.