The space that New Democrats rented out for what they hoped would be their election night victory party on Oct. 19 felt rather cavernous by the time leader Tom Mulcair made his way to the stage to address the crowd. 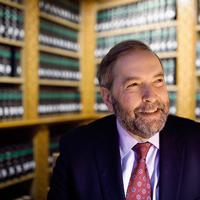 No big influx of supporters came to fill the massive room at the Palais des Congres in Montreal's downtown that evening, after the NDP saw itself slip from Official Opposition to the third-party status to which it is accustomed.

The party lost 55 seats and 10 per cent of votes in the last federal election. But that didn't stop Mulcair from attempting to boost the crowd.

"With this election, Canadians have asked us all to work for them," he said. "We will not let them down."

Some observers thought it was surely a swan song and that Mulcair would step down, leaving behind a failed experiment of shifting the NDP to the centre in an attempt to woo voters.

Two months have now passed since the loss, and while Mulcair faces a leadership review at the party's convention in April he currently shows no intention of resigning.

That's inspired some minor rumbles and grumbles from those who think he isn't the right fit.

One circulating petition cited a combination of poor decision-making and "an inability to read the Canadian electorate" as reasons Mulcair should step down. That document, however, only collected 160 signatures.

University of Manitoba political science professor Radhika Desai said the New Democrats made a move to the right over the last few years, much like former United Kingdom Labour Party leader and prime minister Tony Blair with his party in the 1990s.

Desai said it didn't work. "The chief reason for Mulcair to go is that this is not his game," she said. "His game was the Blairite, right wing, game. He played it in the election and it failed dismally."

Now, said Desai, the party is looking inward and must decide if it thinks such a strategy is wise to pursue again.

Those who gripe about Mulcair cite the NDP's shift to the centre that made it too similar to the federal Liberals, along with its election promise to balance the budget, as reasons the party lost.

But so far such complaints have remained more or less on the down-low within the New Democrats, with few speaking openly about the issue.

Ethan Cox, a former NDP director in Quebec and an editor at the digital media outlet Ricochet, said he quit the party in 2012 over concerns about Mulcair being elected as leader.

Cox said the party lost the number of seats it did in October because it didn't offer any vision to the electorate and was more concerned with not appearing too far to the left on the political spectrum to protect its lead. He blames that squarely on Mulcair and his team.

"What we saw in 2015 was exactly the kind of campaign Tom Mulcair wants to run," he said. "I don't think we have any indication that he's going to do anything differently next election."

Cox also pointed to what he calls a "disconnect" with the grassroots NDP base on issues of social democracy, citing the removal of two candidates this year that had criticized Israel in the past and say they were forced out because of their views.

The NDP has traditionally had some members openly sympathetic towards or pro-Palestinian on the issue, but Mulcair has tilted the party more toward one that staunchly supports Israel, Cox said.

"It's one thing for Tom Mulcair to be very pro-Israel; it's one thing for him to move the party's position on it," he said. But the forcing out of candidates with a differing opinion, where their positions are more in line with the traditional position of the party, he said, "I think that really affected the base and the goodwill of the base."

The way forward for the NDP, Cox said, is to have leadership that's more representative of progressive movements elsewhere, such as Labour Party leader Jeremy Corbyn in the U.K. and Democrat leadership hopeful Bernie Sanders in the United States.

Both are seen to be farther to the left than what is mainstream in their respective countries.

Others say there's no need for Mulcair to step down.

University of B.C. political science professor Michael Byers, who worked on Mulcair's leadership campaign in 2011-12, said that Mulcair's name recognition and general good favour with the Canadian public makes a strong case for him to stay on as party leader.

Mulcair made waves as a leader when he spoke out against the Conservative Party's attempts to ban the niqab, a face-covering garment worn by Muslim women, at citizenship ceremonies, and also with his stance against the Anti-Terrorism Act (Bill C-51). Some argue the bill gives too much power to spy on Canadians.

"I haven't met anyone who doesn't respect Tom in terms of him being a principled man," Byers said. "They refer to his stance on C-51 and on the niqab both as instances where he bucked public opinion on principle. That is unusual and also valuable."

Mulcair's presence in the House of Commons is also another advantage, Byers said, adding that the leader's rigorous arguments and strong voice benefit the country.

That is especially important as a contrast against the other two main parties, Byers said, as the Conservatives have a new interim leader in Rona Ambrose and Prime Minister Justin Trudeau sets about his first term in office.

"Tom provides a strong anchor for the party in the House of Commons," he said.

But history is not on the side of those opposed to Mulcair's continued leadership, according to one watcher of Canadian politics.

University of Toronto political science professor Nelson Wiseman said the chances of Mulcair leaving or being pushed out are virtually non-existent.

Wiseman said while the Liberals and Conservatives tend to oust leaders who lose, that's only because they are in contention for government every election. It's a different reality among New Democrats.

"The NDP does not have the tradition of ever getting rid of a leader," Wiseman said. "The NDP never expects to win; this was the first election in which they thought they had a chance. It didn't happen."

That tradition means the party can build more long-term strategies in the political arena around its leaders, he said.

With the results in October, Wiseman said the party has now reverted to its normal third-party status and that a change in leadership wouldn't necessarily change the NDP's fortunes.

Please note our comment threads will be closed Dec. 21 to Jan. 3 to give our moderators a well-deserved break — however, feel free to discuss this story once it is posted on our Facebook page. Happy holidays, readers.