In October 2011, Tom Mulcair was asked for his position on marijuana during his first event in the NDP leadership campaign. He reiterated the party's long-standing policy on decriminalization, explaining that it was wrong to burden people with life-long criminal records for possessing small amounts of the drug. 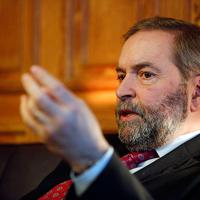 Tom could and should have stopped there, but instead, he went on to address the issue of legalization. He explained that four decades had passed since the "LeDain Commission," and that an NDP government would initiate a similar study to ensure that further decisions on marijuana were informed by the latest science.

The young man who had asked the question looked bewildered. He'd clearly never heard of the LeDain Commission, which was set up by Pierre Trudeau in 1969 to investigate the non-medical use of drugs and recommended decriminalization but not legalization. He just wanted to know, where did Tom stand?

Instead of sticking with the NDP's existing position, or embracing legalization, Tom had committed to a new information-gathering process with an uncertain result. In doing so, he revealed two strong and often intertwined aspects of his identity: a deep commitment to progressive values, and an equally deep commitment to evidence-based decision-making. Most people in the room did not realize it, but Tom had just said that an NDP government was prepared to legalize marijuana -- if the latest science supported such.

Tom is a policy wonk. He supports progressive ideas when, as is often the case, they make good public policy. And he insists on processes leading to evidence-based decision-making -- courts, commissions, environmental impact assessments, tendered competitions and the soliciting of a broad range of expert advice -- rather than basing his policies on ideology, casual assumptions, focus groups or polls. This approach sometimes works well politically, as it did with Bill C-51.

Show him the evidence

The NDP caucus took several weeks to study the "Anti-terrorism Act, 2015," including consultations with legal and security experts. This enabled them to form the considered view that the bill was vague and imbalanced; that it empowered security agencies to collect much more information about Canadians in ways that compromised their fundamental privacy rights, and that it would likely end up being struck down by the courts. Tom then announced the NDP would vote against Bill C-51, despite polls that showed more than 80 per cent of Canadians supported the legislation. And in the next few months, public opinion on Bill C-51 changed dramatically, pushing the NDP into a potential winning position.

The courts are the ultimate mechanism for evidence-based decision-making. Tom consequently had to support the Federal Court of Appeal's ruling that a woman has the right to wear the niqab during a citizenship ceremony after showing her face to an official in private. He was careful to express his personal discomfort with the niqab, but resolutely defended the principle of the rule of law against harsh attacks by Stephen Harper and Gilles Duceppe. He did so knowing this would cause the NDP's support in Quebec to drop -- and it did, by 20 per cent, which translates into nearly five per cent nationally. Journalists have called Tom's stance courageous, but he was just being true to himself.

Tom's commitment to evidence-based decision-making extends to pipelines and other infrastructure projects. He believes that politicians alone should not be making decisions on complex issues of science and engineering: that good decision-making requires taking expertise seriously and is open to the possibility that first assumptions might be wrong. When Tom promises a rigorous environmental impact assessment that includes down-stream impacts such as climate change, it is because he will not impose his personal views -- including, perhaps, that the expansion of the Kinder Morgan Trans Mountain Pipeline is incompatible with principles of sustainable development -- on an issue that can be resolved fairly and objectively through process. He has taken the same position with regards to the proposed Energy East Pipeline, insisting on a rigorous environmental impact assessment there also.

However, this commitment to process has not stopped Tom from pointing out that Energy East would result in more refining jobs within Canada than projects such as Trans Mountain, which would export unprocessed bitumen. Likewise, Enbridge's Northern Gateway Pipeline proposal, whose raison d'être is to export raw bitumen via increased tanker traffic on British Columbia's northern coast, poses a risk to valuable marine life and constitutionally protected aboriginal rights; for these reasons, Tom has come out against it.

In the same vein, it is obvious that the proposed Keystone XL Pipeline to send raw bitumen to the Texas coast would effectively export tens of thousands of jobs. I recall the look of disbelief on Tom's face when, in October 2011, he learned that British Columbia allows the export of raw logs. Quebec, where he spent most of his career, does not.

Many progressives do not appreciate the principled, process-oriented side of the NDP leader. They want grand gestures, decisive statements and that magical ingredient "vision." Tom wants good government, with adherence to rules and processes that will be applicable regardless of who is in power. He cares about public policy as much, perhaps more, than he cares about politics. Unfortunately, a commitment to evidence-based decision-making can be a liability during an election campaign, since it allows other, more opportunistic leaders to capture the headlines.

Take the F-35 fighter jet. For years, the NDP and Liberals had both insisted that an open, fair and transparent competition amongst potential suppliers should be held to choose a replacement for Canada's three-decade-old CF-18s. But last month, Justin Trudeau changed his party's position by peremptorily ruling the F-35 out of the competition, which would now be held only among other models of aircraft. In doing so, he differentiated himself from Tom and captured the attention of many voters.

From a policy perspective, Trudeau's new position is unwise. Arbitrarily excluding the F-35 is inconsistent with the principle of an open competition. It might provoke manufacturer Lockheed Martin to mount a legal challenge, delaying the procurement for years. Excluding the F-35 will also annoy the U.S. government, which has sunk many billions of dollars into developing the aircraft and hopes to lower the per-unit price by persuading its allies to buy in. An open competition that included the F-35 but ultimately led to the choice of a different model would be much easier for Canada's powerful ally to accept.

Under Tom's approach, an NDP government would define a "statement of operational requirements" that allowed advanced "fourth generation" fighter jets like the Boeing Super Hornet, Eurofighter Typhoon, Dassault Rafale and Saab Gripen to compete with the stealthy, "fifth generation" F-35.

Demanding but legitimate requirements could be set for range, acceleration, speed and mobility, so as to obtain a plane that can patrol vast Arctic expanses and prevail in aerial combat against Russian or Chinese planes. These requirements would disadvantage the F-35, which, as a consequence of its reduced radar profile, has relatively small internal fuel tanks and a wide fuselage that reduces range, acceleration and speed.

A Mulcair government would necessarily set a budget limit for the acquisition of new planes, as well as the minimum number required. This may also disadvantage the very costly F-35, which because of the recent drop in the Canadian dollar can no longer meet the $9-billion limit set by the Harper government for the 65 planes it wants to buy.

The NDP leader perhaps expects that the F-35 would fail to win a fair and open competition. But once again, he takes the view that the process -- not electoral positioning -- should decide.

In 2011, I wrote an article explaining that my support for Tom's leadership bid was based upon his demonstrated environmentalism, including resigning from the Quebec cabinet over a dispute about development in a provincial park. In the piece, I translated part of the preface that Tom had written for the French version of Andrew Nikiforuk's prize-winning book Tar Sands: Dirty Oil and the Future of a Continent:

Being responsible towards future generations literally means being accountable from both a moral as well as a legal standpoint. In 2010, we know that it is impossible to maintain this [tarsands] development without seriously affecting the health of human beings and without destroying important ecosystems forever.

This is the Tom Mulcair who I know and admire: a potential prime minister who respects law and science, is true to himself, and pays no attention to polls.