Mario Calla has not received a Syrian refugee at his front-line reception centre in Toronto since April, but that's not stopping him from telling staff to brace themselves -- even put holiday plans on hold -- to help the flood of new arrivals expected by the end of the year. 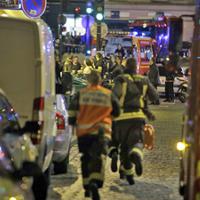 Five Things We Already Know About the Paris Attacks (and Ourselves)

The new Liberal government is pressing forward with its promise to fast track 25,000 Syrian refugees to Canada by January.

"They come directly from the airport to us," Calla said. "They stay with us, and we provide them with initial settlement -- the essentials -- for those first two weeks."

The government has yet to reveal its specific plan for bringing in the refugees, but Calla said his organization is bracing for a variety of scenarios, even asking staff to cancel vacation plans for December and January.

Calla said he foresees a number of challenges for the refugees, with housing at the top of the list -- though he said the organization has relationships with landlords who know that "refugees make good tenants."

The large number of refugees expected will inevitably stress the organization, and two more housing workers might be hired to deal with the influx, he said. "The challenge is just initial volume and how to work through that."

"We saw a few Syrian refugees earlier this year around the first quarter, then nothing else," he said. "We should have been seeing more, but that hasn't happened."

Calla blamed the lag on decisions by the former Conservative government, including the ordering of an audit of refugees to ensure that security concerns were being addressed.

The Liberal government last week committed $100 million to expedite the processing of the Syrian refugees, while vowing to maintain high vetting standards.

For the Liberals to meet their goal, 500 Syrians would have to go through security screening per day, she said.

"Can we do it this quickly in a secure way?" Ambrose asked. "I think that's an appropriate question."

Friday's attacks do not appear to have deterred the Liberals' plan to meet its refugee goals.

"One of the things that is most important right now is for a country like Canada to demonstrate how to make accepting large numbers of refugees not just a challenge or a problem, but an opportunity," he told the Ottawa press gallery.

"I think leadership on the world stage showing that this can be done and should be done -- and is a way of not just helping people in dire need of being helped, but also contributing to economic growth in our own countries."

The prime minister has the right attitude, according to Susan McGrath, professor of social work and refugee studies at York University.

McGrath said there's plenty of evidence that refugees contribute to the success of their new countries.

Lebanon, for example, has seen economic growth despite a massive number of refugees arriving in 2011, McGrath said.

The country, which neighbours Syria, has taken in one million refugees despite a population of just 4.5 million, and its gross domestic product has maintained a projected growth rate of two per cent for the year, she said.

With the right supports, Syrian refugees represent a similar opportunity for Canada, she said.

They will also benefit from an existing support network of 40,000 Syrians already settled here, she said.

"The investment that a country puts into people, like the initial cost of education or settlement services -- you get that back," McGrath said. "Because they will get jobs, they will become employable and taxpaying citizens."

As they settle, refugees find ways to earn a living, she said, describing a recent example on the news of a seven-year-old boy in Lebanon who makes money selling gum and flowers.

"If you've got a kid at seven years old making a living on the streets of Beirut, God knows what he can do here if we give him an opportunity with education," she said.