The new riding of Burnaby North-Seymour deserved the attention it got during the federal election. An unlikely merger of Tory-friendly Seymour in North Vancouver and pro-New Democrat north Burnaby, it reflected a polarized country. 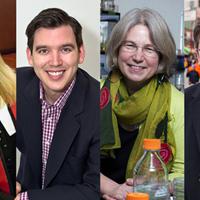 It was also a micro-Canada, with everything from wilderness to the oil industry and a highly diverse population both ethnically and economically. It deserved, and got, four strong candidates -- all of them running for the first time in a federal election.

The race strikingly mirrored the progress of the national campaign, with the NDP in the lead for the early weeks with Conservatives close behind, Liberals in third, and the Greens looking good in early polls.

Having covered Burnaby North-Seymour in some detail during the campaign, The Tyee wanted to know more about the candidates' experiences.

Baird Ellan had positive feelings about her campaign. In a Facebook post in late October, she said the race took her back to the start of her working life as a Fuller Brush door-to-door salesperson, and renewed a personal belief that people are innately open and friendly.

Speaking with The Tyee, Baird Ellan said she was pleased with all the volunteers who kept coming in -- including a lot of legal professionals willing to knock on doors for her.

She praised Tom Mulcair's work as a leader who stuck to principle, such as the niqab issue, even when he knew it would cost him votes. In hindsight, though, Baird Ellan thought the campaign should have more closely followed Jack Layton's hopefulness and optimism.

Little also thought he'd run a good campaign, complicated by the federal party's reliance on wedge issues like the niqab. "Some wedge issues are OK," he said, if they divide the opposition, but this one didn't work.

"That gave me a foretaste of the campaign," he said.

Little thought the Conservative online campaign could have been better. He'd been off Facebook for a month, he said, and didn't use Twitter very much, while seeing other candidates across Canada run into trouble with their tweets. The party also spent relatively little on print ads, which in earlier campaigns had brought in a lot of donations.

Beech had high praise for his team: "I was surrounded by a group of extremely intelligent and passionate Canadians over the last two years, and none of this would have been possible without their wisdom, energy and support."

View from the doorstep

On the doorstep almost no one raised the Kinder Morgan pipeline issue, Little said, except for one street in Burnaby that the pipeline runs past. One block away, he said, people liked the pipeline because it had created a green belt in their neighbourhood.

Little also mentioned the problem of all-candidates' meetings. He was attacked for not showing up, but he argued that most at such meetings were already partisans with their minds made up who didn't want to hear his arguments. Door-knocking seemed like a better use of his time.

Beech told The Tyee: "The economy was consistently the number one issue on the doorstep [from] affordable housing and debt, to unemployment and seniors' issues. ... In North Vancouver, transit and transportation issues continued to be number one ... with Kinder Morgan placing a strong second. In Burnaby, the Kinder Morgan pipeline was clearly the number one local issue."

Baird Ellan heard a slightly different story. She said: "What I heard primarily was 'anyone but Harper' and then just trouble making ends meet: putting kids through university, affording child care, getting stable jobs with benefits, health care, senior care, and yes, traffic and transit."

Little said only one voter in 10 actually raised issues on the doorstep; most just said, "Thank you for running," and took his literature.

When did they get a sense of the way the election was going? Baird Ellan said she hadn't met a single person who was switching to the Conservatives. "But when we were still getting 20 per cent saying they weren't sure to vote for, within two weeks of the election, I knew something was up."

Beech was evidently the one running most scared: "I was probably the last person on our team to actually admit we had won on election night because I was not willing to take anything for granted." (Little said he'd been the one to phone Beech with the news and congratulations after the Conservatives failed to take the polls in North Vancouver's Parkgate.)

The outcome and after

Little was philosophical about the election's outcome: "At least I'm not getting on a plane to Ottawa." He liked having the prospect of a stable government for four years, even if it was Liberal.

On her Facebook page, Baird Ellan praised her team and said: "In the end voters chose change, but our message of hope, optimism and caring generosity did not resonate." In an email to The Tyee, she added: "I think people chose middle class tax breaks over promises of enhanced social programs."

And what issues did they foresee for the new Trudeau government? Mike Little mentioned "euthanasia" (his term for doctor-assisted suicide) and legalization of prostitution. "They were never discussed in the campaign," he said, "but they're coming up soon."

For Baird Ellan, electoral reform is a "big priority. ... I would like to see the Liberals consider proportional representation, as opposed to preferential balloting."

On the environment she said, "I would like to see PM Trudeau come back from Paris with some concrete targets for carbon emission reductions. And I sincerely hope the Liberals will bring in a credible process for assessing the Kinder Morgan application." That process, she added, should include carbon targets and safety and environmental protection -- "if those are properly built in, that expansion should never happen."

Beech didn't single out any specific issues, saying the Liberal platform had been framed after knocking on "over three million doors. ... I'm proud of our platform and think we have our work cut out for us to make sure we deliver on our promises."

Their post-election plans are varied. Mike Little is considering a career change to a field where his political experience might be useful. Baird Ellan is thinking about writing on legal and social issues.

Beech said: "Campaigning for public office was like getting another two master's degrees. As a Member of Parliament, the learning curve is going to be even steeper."