Immigration Minister Chris Alexander suspended his re-election campaign this morning, following reports that a toddler who washed up lifeless on a beach in Turkey was the youngest member of a family that had pleaded with officials to be allowed into Canada. 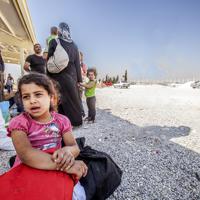 Will Canada Meet Its Target to Bring in 10,000 Syrian Refugees?

Aylan Kurdi, his brother Galip, and their mother Rehan died when their boat capsized en route from Turkey to Europe. The father of the two boys survived.

A photo of Aylan's body, widely viewed yesterday, brought the world's attention to the plight of Syrian refugees.

News reports Thursday indicated that Port Moody-Coquitlam NDP MP Fin Donnelly and the sister of Aylan's father had been lobbying immigration authorities to allow the family to come to Canada.

Appearing on CBC's Power and Politics Wednesday, Alexander said his government is at the forefront of humanitarian response to the refugee crisis, and highlighted the intake of Iraqi refugees.

When host Rosemary Barton challenged him over why the government has acted so slowly when it comes to Syria, the minister tried to change the focus to how the media has handled the story.

But after news of the family's attempts to get to Canada surfaced today, Alexander announced that he would pause his campaign and return to Ottawa to determine what happened.

Stephen Harper, meanwhile, said the photo of Aylan underlines why Canada must fight ISIS overseas and said the violence in Syria threatens to spread to other countries.

Harper took aim at opposition parties, which have stressed the need for humanitarian efforts and streamlining the process for Syrian refugees.

Meanwhile, the New Democrats and Liberals both said they would bump the number of refugees Canada takes from Syria.

What promises has the Conservative government made on Syrian refugees? Here's a look at some of the numbers.

According to the United Nations' High Commission for Refugees, currently there are nearly 4.1 million registered Syrian refugees, up from 3.7 million in January.

In January, Ottawa pledged to bring 10,000 Syrian refugees to Canada for resettlement by the end of 2017 -- 60 per cent via private sponsorship, meaning a family is willing to take responsibility for them.

The remaining 40 per cent are slated to arrive via government resettlement programs, meaning the government takes responsibility for them.

The statement referenced an August campaign promise by Harper to being in more refugees on top of the initial commitment.

"The Prime Minister also recently announced that a Conservative government would add an additional 10,000 persecuted ethnic and religious minorities from the region," said the statement.

But past attempts by media to suss out the number have been roadblocked.

In July, Maclean's was told the number of Syrians resettled wasn't "public information."

In December 2014, Alexander said in the House of Commons that 1,150 had made it to Canada. He often lumped that number in with 20,000 Iraqis the government also resettled.

But documents obtained by NDP foreign affairs critic Paul Dewar at the end of 2014 showed only 457 had made it to Canada with the help of the government. The rest arrived on their own.

In May, Ottawa said it had finally reached its target of 1,300, but it isn't known how many were resettled by the government or how many made it on their own.