Jagjeet Sidhu's nightmare started with a phone call from his mother-in-law on a rainy March morning in 2007. 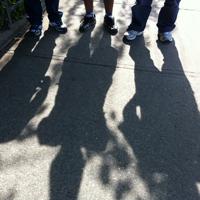 Had he heard anything about the crash of a 15-passenger van crammed with 17 women on their way to work on a farm, she asked? Was her daughter -- his 31-year-old wife Sarabjit Kaur Sidhu -- safe?

"Don't worry," Sidhu told her. "I'll find out what happened."

Sarabjit was dead, along with Amarjit Kaur Bal, 52, and Sukhwinder Kaur Punia, 46. The van, with wooden benches for seats, bald tires, a fraudulent inspection permit and no seatbelts, had flipped on the highway near Abbotsford.

The hardest part was telling their three children.

"They have grown up without their mom," Sidhu says. "We teach them about who their mother is. Her picture always hangs on our wall. But too many people don't know about our story."

More than eight years later, a memorial is about to rise in Abbotsford. After five years of fundraising and close consultation with victims and their families, artists Dean and Christina Lauzé are putting finishing touches on a seven-metre-tall sculpture they've dubbed the "Golden Tree" because its upper branches will be covered in 23.5-karat gold leaf -- symbolizing lofty aspirations and earthy realities.

It has taken more than 1.5 tonnes of steel to create the frame for the tree, which is covered in sculpted fibreglass. The memorial is set to be installed in the International Friendship Garden behind Abbotsford's Clearbrook Library as early as September. It will be the first memorial in Canada recognizing seasonal farm workers. And, supporters hope, it will be a reminder of the dangers they face.

Harsharan Bal's mother Amarjit Kaur Bal died on the way to her first day of work. "She was a healthy person who went to work and never came back," he says. "It's still really hard for the families. Everything comes back again to face us every year."

Now Bal and his father, who has battled stress and depression since the tragedy, will at least have a place to mark their loss. "When he's having a hard time," he says, "my father can sit there and relax under the memorial."

The artists say the tree represents hope for change, the importance of agriculture and farm work and the wisdom in community. Its three branches include images of three women, a reminder of those who died. Handcrafted translucent leaves capture the sun's light.

"It is a living, nurturing, sustaining entity," Christine Lauzé explains, as she stands beside the still unattached upper portion of the branches, which dominate her suburban front yard. "This was a terrible, devastating loss for them, so it means a lot for us to have some form of healing in this memorial.... Instead of the memorial being about mourning and devastation, it's about looking to the future."

Bal loves the tree image, and hopes it reminds passersby to think about where their food comes from -- and the well-being of those who toil to feed them.

"When you see that tree there, with its arms up to the sky, it's like they're saying, 'Look at us, we are the ones who work on farms to bring food to your homes,'" Bal says. "They should be treated as human beings. It's a great memorial and a good message to all the other employers who treat their workers like animals."

The $310,000 to build the towering memorial came largely from the BC Federation of Labour and its member unions and the provincial government.

Federation president Irene Lanzinger says the tree isn't just a way to remember the victims. Farmworkers still lack access to basic health and safety rights other workers take for granted, she says. She hopes the memorial pushes the provincial government to finish implementing the recommendations from a coroner's inquest into the crash.

The government said last year it had fully implemented many key recommendations, including boosting random inspections of 15-passenger vans, reclassifying them as "high-risk vehicles" and ensuring every passenger has a seatbelt. The province also replaced 40 kilometres of concrete freeway barriers in the Fraser Valley, Delta and Surrey with flexible steel cable, which reduces impacts on passengers in a crash.

The government also says it has implemented a recommendation to change legislation so agricultural businesses recognize seasonal workers as full employees. But Lanzinger says seasonal workers are still treated as second-class citizens when it comes to employment standards, living conditions and health and safety.

Other recommendations, the federation argues, remain unfulfilled. The minimum required thickness of vans' tire tread wasn't increased beyond 3.5 millimetres, as suggested. The definition of a "bus" was not clarified to make seatbelts mandatory in 15-passenger vans (the province says it took "alternative action," levying fines for commercial van operators carrying passengers without belts). Also ignored was the call for van inspection sites to be independent from repair shops; instead the province vowed to "act swiftly and strongly" against any inspection facilities that failed to properly inspect vans.

Too often, Lanzinger says, the government calls inquests and inquiries into workplace deaths only to ignore many of their recommendations. It's time "to have farmworkers' rights honoured in the way other workers' rights are honoured," she says.

Cuts to the Employment Standards Branch over the past decade have eroded its ability to ensure workplace safety, Lanzinger adds. "Vigilance around health and safety just has to be constant," she says. "There are many good employers out there, but there are always employers who want to cut corners or cut costs, who don't put the safety of their employees at the top of their lists."

Labour Minister Shirley Bond was not available for an interview Thursday or Friday.

'Justice was not served'

Every March 7, Sidhu and his family attend a memorial vigil. This year -- the eighth anniversary -- his 16-year-old daughter Avneet spoke as families broke ground for the Golden Tree monument.

"This is not an angry daughter speaking from her perspective," the teen told the crowd. "This is just a citizen saying that justice was not served.

"I hope that when this tree is built that people will not just admire its beauty but will also understand why it's there... a reminder of the hard work of farm workers, and as a reminder to passersby that their lives are just as important."

"My wife will never come back, but we're still fighting for the future, for other workers."