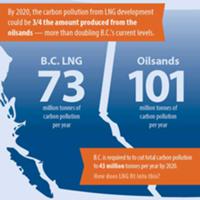 Carbon Footprint of BC LNG Boom Could Rival Oilsands

"They're talking a lot about being a world leader in climate action," said Jens Wieting, a campaigner with the Sierra Club of BC. That's misleading considering the province's recent record on carbon emissions, he said. "We are currently moving in the wrong direction."

A B.C. government press release dated April 13 trumpeted the "world-leading standard B.C. has set for climate action" and challenged other jurisdictions to meet or beat the province's standard. It noted Clark was set to speak to meetings of the World Bank-International Monetary Fund on April 17 about the B.C. carbon tax, "which sets a powerful example for the world."

Clark also congratulated California on new targets in late April that would reduce greenhouse gas emissions by 40 per cent below 1990 levels by 2030, noting, "In B.C., we have been leading by example since 2008, when we introduced our carbon tax."

Even the election of Rachel Notley as premier of Alberta was occasion for Clark to say that maybe now that province would consider adopting a carbon tax like B.C.'s.

But as the Sierra Club's Wieting points out, the hot air from Clark and the B.C. government comes as the province's climate change record has slipped.

While B.C. claimed to have met its interim target of a six per cent reduction in greenhouse gas emissions from 2007 levels in 2012, a year later they had gone back up by 2.4 per cent to 63 million tonnes of carbon dioxide equivalent, Wieting said. He cited recently released figures from the National Inventory of greenhouse gas sources and sinks.

"We can't afford to move in the wrong direction and see our emissions increasing," he said. "The science is clear we're running out of time."

The slip comes at a time when the European Union is already 19 per cent below its 1990 emission levels. Over the same period, emissions have gone up in B.C. by about 13 per cent, he said.

It's fine for Clark to champion the carbon tax, but it's not enough, he said. "The carbon tax is definitely a success. It was a great starting point," he said. "We can see with our current emissions data in B.C. it is not enough."

Need to do more, says minister

B.C. Environment Minister Mary Polak acknowledges the province's carbon emissions increased in 2013 and said that the rise was expected.

"These things tend to flow over time not in a straight line," she said in an interview in her office. "They tend to go up and down. Nevertheless, with increased economic activity, we know we're going to need to do more."

B.C. is getting deserved recognition for the carbon tax, she said, but she agrees it won't be enough. "We've had some exciting times, but we know we've got more to do if we're going to make our 2020 and 2050 targets," she said. "Now is the time to start looking at the 2008 climate plan and adding to it the elements we're going to need to make it to those goals."

Polak said she wants to avoid pre-judging where further emission reductions will come from, but notes that the province's biggest emissions are from transportation, buildings and natural gas production.

"You're always balancing the need for investment in order to reduce emissions," she said, noting that without enough money companies won't spend to cut emissions. "You need investment in new technology, in innovative practices, with at the same time knowing that when you expand your industrial base, you're also bumping up emissions."

It's quite possible for B.C. to meet its emission reduction targets, even if plans for at least three liquefied natural gas plants and new pipelines are realized, she said. "It's not going to be easy by any means."

"The key is we know we need to do more and now we're setting about to get the advice and the recommendations so we can decide what those things are going to be."

BC stalled on climate action: NDP

While B.C. has made some progress on climate change, it has since stalled, said NDP environment critic Spencer Chandra Herbert. "The only thing Christy Clark has done as premier to address climate change is make it worse," he said. "Since she became premier, climate change emissions have gone up."

Clark cancelled funding for the Live Smart program that helped people reduce their carbon emissions, Chandra Herbert said.* She has also refused to do more to reduce the emissions from the upstream natural gas industry.

Even the flagship carbon tax has been frozen since 2013, a freeze Clark has promised will last at least five years.

It's not surprising emissions are going back up, Chandra Herbert said. "When you get rid of every other part of the plan, you're not going to go any further."

Science shows that now is the time for action, but instead the government mostly comes out with rhetoric, he said. The promised Climate Action Plan revision came with no timeline and will likely be delayed until an announcement can be made before the 2017 election, he said.

"It's frustrating," said Chandra Herbert. "She's trying to live off the legacy of an action by Gordon Campbell, not by herself or her government."

*Story corrected May 14 at 2 p.m. A previous version of the story quoted Chandra Herbert saying Clark disbanded the Climate Action Secretariat. In fact, premier Gordon Campbell moved the secretariat in 2009 from the premier's office to the finance ministry, where it still exists.