This month, provincial MLAs are preparing for the upcoming legislative session, in which they will debate rules for carbon pollution and taxes for liquefied natural gas (LNG) development. 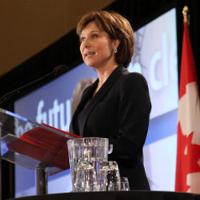 BC Is Flush with Natural Gas; Is that a Good Thing?

*Based on Environment Canada report, Canada's Emissions Trends 2013, which captured only limited development of liquefied natural gas (equivalent to two million tonnes of carbon pollution for all of Canada).

The Pembina Institute's assumptions and approach to calculating carbon pollution can be found here. Numbers based on carbon dioxide equivalent.

The connection between LNG development and carbon pollution is significant. And just how the government chooses to manage both issues will have serious long-term implications, for the province and the country.

Last year, Minister of Natural Gas Development Rich Coleman was asked on CBC's Early Edition what B.C.'s LNG plans could mean for the province's climate targets. His response: "Meeting our goals will be a challenge."

If you're wondering how big that challenge may be, there are two things you should know. The first is that carbon pollution from this industry could be extremely large, nearly as much as the oilsands in Alberta produce. The other is that B.C. can choose to make the impact much smaller.

The B.C. government is investing time and resources in promoting extensive LNG development. In order to meet its annual revenue hopes of more than $4 billion, the province will need to export four to six trillion cubic feet of shale gas per year by 2020. Producing that much gas would require five to seven LNG facilities and over 10,000 wells with the accompanying network of roads, pipelines, compressors and gas processing plants.

For a province often cited as one of the greenest in Canada, it's a profound disconnect.

Digging into the numbers

The carbon pollution considered here refers to LNG development in B.C. This includes pollution from extracting and processing the natural gas, likely from shale gas fields in northeastern B.C., transporting the gas to the LNG facilities on the coast, then liquefying and storing the LNG until it is loaded onto LNG carriers (tankers). This doesn't include carbon pollution generated from burning this gas in Asia, which could produce more than 200 million additional tonnes of carbon pollution per year.

The B.C. government could choose to alter or ignore the carbon reduction targets, as other governments have done, or add in special accounting for LNG. But these targets represent B.C.'s commitment to contribute to global climate solutions. And the evidence is mounting of the real-world impacts that repeatedly missing reduction targets can have. For B.C., the impacts of climate change include declining fisheries, flooded coastal communities and increasingly vulnerable forests.

Fortunately, walking away from B.C.'s climate commitments isn't the only option. Decisions made about LNG development in 2014 could put B.C. on a lower-carbon development path.

Through its B.C. jobs plan, the government could choose to prioritize creating employment opportunities in lower-carbon sectors. For example, the clean energy sector is growing globally, with many countries choosing to invest in economic development through renewable energy industries. By working to grow other parts of the economy, B.C. would face less pressure to rapidly develop LNG for economic growth. Less LNG development means lower carbon pollution with jobs and GDP growth elsewhere.

The government could also be more selective, and choose to allow only the best LNG proposals to proceed. The carbon pollution from an LNG plant and associated shale gas extraction depends on decisions regarding timelines, siting, technology and where the shale gas comes from. So choosing the LNG projects with the lowest carbon footprint -- rather than as many projects as possible -- would significantly reduce the projected jump in carbon pollution levels.

Further, the technology choices LNG companies make could play an important role in reducing carbon pollution. How much renewable energy will be integrated into the design of the facilities? Will shale gas processing plants capture and store their carbon pollution? These decisions and others could be influenced by the standards and taxes the B.C. government sets for LNG development. Building on the success of the provincial carbon tax, the province's new LNG tax could encourage reductions in carbon pollution and set a high bar for innovative technologies.

If LNG development proceeds as the B.C. government hopes, we will face a climate challenge nearly as big as the Alberta oilsands, and all the risks and reputation issues that go with it. However, if the government chooses to limit the growth of this sector -- prioritizing low-carbon job creation -- and sets a high standard for emissions reductions technology for any projects that do proceed, it could chart a different course.

The province is facing a critical window of opportunity to determine how it will regulate LNG development. The implications for our climate must be an important part of those decisions, because British Columbians will live with the consequences -- whether positive or negative -- in the decades to come.

Infographic below by Pembina Institute.