Last year, after writing a searing 10-part series on inequality in British Columbia, Tyee reporter Andrew MacLeod sensed there was a whole lot more to investigate about the growing gap between rich and poor in the province. 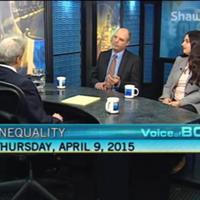 His new book, A Better Place on Earth, takes readers on a gripping, often disturbing, journey that explores the origins of unequal wealth distribution in B.C., its impact on the economy and greater society, and the role governments can play to alleviate the divide.

As MacLeod notes, the wealth gap in B.C. is greater than anywhere else in Canada. The top 10 per cent in B.C. now hold 56.2 per cent of the wealth, while many low-income people must choose between buying food and medicine.

Advance buzz have been overwhelmingly positive.

Sarah Khan, a staff lawyer with the BC Public Interest Advocacy Centre, called it "a must-read for anyone interested in building a more just and prosperous society." And Vancouver Sun columnist Stephen Hume described it as "a significant work of investigative journalism."

For MacLeod, who is The Tyee's legislative bureau chief in Victoria, the book is the result of a decades-long interest in exploring the conditions that allow some people to accumulate vast wealth while others beg on the street. "That's a story that I feel needs to be told and understood," he said.

Launch events for A Better Place on Earth are in Victoria, April 28, at the Bard and Banker Pub, 1022 Government St., and May 11 in Vancouver at the Djavad Mowafaghian World Art Centre, Goldcorp Centre for the Arts, 149 W. Hastings St.

In Vancouver, MacLeod will take part in a discussion panel, joined by Tyee founding editor David Beers and Iglika Ivanova, a senior economist with the Canadian Centre for Policy Alternatives.

The Tyee posed some questions to MacLeod about the issue, the writing of his book and possible solutions.

Tyee: The book stemmed from a series you wrote last year for The Tyee. What got you interested in inequality in the first place?

MacLeod: I've been interested in economic justice for a long time. I remember as a child in the late 1970s finding it concerning to see people begging. My parents, who are caring people, reassured me that in Canada there was a strong social safety net, but as an adult working as a reporter I've had the opportunity to investigate to what extent that's true. It's clear that over the past three decades we've become a much more unequal country, and nowhere has that been more the case than in B.C. Public policies, both federally and provincially, have tended to favour the wealthy at the expense of everybody else, and that has consequences.

How does the book differ from the series?

It was a luxury to have three months to report in depth on inequality for The Tyee, but even after writing 10 stories I found there were areas I hadn't managed to explore. The book has a lot more detail on the limitations of "get a job" as a social policy, the many roots of inequality, and how who you are affects how you do in the economy. It will come as no surprise that in general, white middle-aged men fare better than for example female First Nations children or recent immigrants, but that needs to be named and addressed.

Your book documents the lives of many people living below the poverty line, particularly children. What impact does inequality have on greater society?

There's much evidence that more unequal societies do worse on any number of social indicators, whether it's life expectancy, crime rates, violence, substance abuse, mental illness or teen pregnancy. Societies that have high inequality tend to have lower social mobility, where children are unlikely to earn more money than their parents. In B.C. you see the consequences in things like people carrying high debt levels, making risky investments and failing to pay for medicine they've been prescribed. That ends up affecting everyone, either through an increased need for spending on policing, prisons and health care, or through reduced feelings of social belonging or cohesion. We also know that when wealth is concentrated, some people who can make big donations are able to have much more influence on political decisions than others who seldom feel their voices are heard. In a democracy, that's not good.

What impact does it have on the B.C. economy, and the province's future?

There's a growing consensus that high inequality is bad for the economy. This makes sense intuitively, when you consider that if someone who is already rich receives $1 million they're likely to stick it away somewhere that may or may not contribute to the economy. If you instead steer $1,000 each to 1,000 people who don't have much money, they are a lot more likely to go out and spend it on things they need. But there's also the question of social license. Much of the wealth in B.C. depends on the exploitation of publicly owned resources and people who don't feel like they're likely to benefit from economic development have very little reason to support proposed projects, whether it's liquefied natural gas export, oil pipelines, hydro dams, logging or mining. This is why inequality is a concern for groups like the Business Council of B.C., which in 2013 warned that "if unchecked, [inequality would] lead to dysfunction and unacceptable social stresses."

How did this wealth gap come about? Is it the result of political decisions, or is there something deeper at play?

There are some who would argue that there's something in our human nature that drives the level of inequality that we see. I'm not convinced by that. Many societies do a better job of sharing than we do and the level of inequality has shifted significantly over time. Economist Thomas Piketty argues that income from capital grows faster than income from labour, making the concentration of wealth a long-term pattern. The depression of the 1930s and the two world wars led to increased equality, but he argues that was a blip in the general direction we've been headed. Other economists like Joseph Stiglitz stress that governments can set policies so that outcomes are fairer. Certainly in B.C. in recent decades we've seen tax cuts that disproportionately benefit the already well off, combined with reduced spending on programs that help people in need.

I liked how you wove your own life circumstances into the narrative. You point out that your relatively secure middle class standing is the result of some good luck along the way. What was the point of describing your own background?

Thank you. That was definitely one of the points I was making. My biggest lucky break was to be born into a stable family where there was plenty of money and where education was highly valued. It does illustrate how those advantages tend to get passed down across generations, similar to how dysfunction can be passed down. But those details serve other purposes as well. From a narrative point of view, they make what could be a dry topic a bit more accessible, a bit more readable. And I think it helps the reader to know a little about the person who is talking. Most journalism is written to appear unbiased, but that's a bit of a lie. How each of us sees the world is coloured by who we are and our own experience and I think it makes for more honest, or more complete, reporting to be clear about those biases. Beyond that, there are people who will be tempted to dismiss a book like mine as "class warfare" or "class jealousy." Including the details of my background should make clear that's not at all where I'm coming from.

Many of the people you document have found themselves without secure housing or savings, even after years of hard work. Of all the people you interviewed, who stands out? Who had the most impact on you?

That's a tough question. I'm always grateful to people who allow me to share their stories. I think that takes courage, especially for people who are living in poverty. There's so much stigma attached to being poor, or to needing help, and people often fear they'll be judged. Jessica Sothcott, who the book opens with, had a daughter Rosalie in middle school like mine, so it was very easy to identify with them and to imagine what living on a tiny disability assistance cheque would mean. There's so much pressure at that age to have the same things as your peers, whether it's clothing, activities or gadgets. There are other people who don't appear in the book, but who had a big influence. I'm thinking of a woman who I first met at least a decade ago when a church in Victoria had refused to allow her to use the bathroom. In a piece that didn't use her name, as she'd asked, I described her as "homeless." She recognized herself in the story and told me later, "I'm not homeless. I live in my van." It was a good reminder to me of how important it is to respect people's pride, their sense of dignity and their right to describe themselves on their own terms.

The book isn't all doom and gloom. How can policy makers and society as a whole make British Columbia a more equal and just place to live?

The book is deliberately optimistic. I don't think I'd want to read a book that was completely focused on how bad everything is, so I certainly didn't want to write something like that. And the truth is that we've gotten much right in B.C. and Canada in the past. We would be even more unequal than we are now without decent schools, a universal health care system and a progressive income tax regime where people who earn more money pay more tax, for example. That's not to say we can't do better -- there are obviously many people in our province who struggle to make ends meet -- and the book lays out dozens of possibilities for making life fairer, everything from better funding childcare and adopting a minimum wage high enough so workers can escape poverty to doing more to tax wealth and reducing the cost of housing. We are at a critical juncture. Inequality has been rising for three decades and we need to have a discussion about what that means and whether we want to accept it. My hope is the book will contribute to that discussion.