Western Canadian glaciers, an ancient water bank that maintains stream flow for hydroelectric dams and salmon-bearing rivers, could shrink by 70 per cent by 2100. 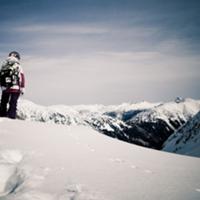 The catastrophic loss of ice for Western Canada has major implications for the availability of drinkable water, the survival of fresh water fisheries, and the productivity of hydroelectric generation, finds a new study published in Nature Geoscience this week.

Western Canadian glaciers, which occupy 26,700 square kilometres, have been retreating for several decades. The surface area covered by ice in the interior mountains declined 11 per cent between 1985 and 2005, and nearly 20 per cent in the eastern slopes of the Rockies.

"We are getting a big signal from the glaciers about what the climate is doing," said lead author Garry Clarke, professor emeritus at the University of British Columbia.

Using comprehensive modelling, which includes ice flow physics, the study found that rising temperatures caused by fossil fuel emissions will wipe out most glaciers in the interior of British Columbia and the Rocky Mountains of Alberta under most scenarios.

The Columbia Icefield, which waters both Banff and Jasper national parks, will disappear altogether by 2100 if greenhouse gas emissions are allowed to triple beyond current levels under what Clarke called "the bad guy" scenario.

"We won't see ice in the Rocky Mountain Parks. That would be a sad cultural loss and aesthetic loss for Canada," said Clarke.

If humans can restrain their fossil fuel spending and keep carbon dioxide emissions below 450 parts per million ("the good guy scenario," as Clarke puts it), and thereby prevent temperatures from rising more than two degrees, many glaciers will have a better chance of keeping their ice -- albeit in a diminished state.

"There is a reward to be reaped with low carbon constraints," said Clarke. But in order to slow the disappearance of glaciers and sustain others for future generations, society must radically reduce carbon emissions and maintain those reductions for the next 25 years, he said.

Without glaciers, many fresh water fisheries will go extinct. "Glaciers melt in late summer and keep mountain streams flowing and cold. That's one of the services we will lose," explained Clarke.

Retreating glaciers could also have a significant impact on the Columbia River, which "yields the largest hydroelectric production of any river in North America," he said.

Most of the rapid glacial decline will occur between 2020 and 2040, when the majority of glacial melt will run off into streams and rivers into the ocean.

In the study's modelling, only glaciers in northwestern B.C. along the Yukon and Alaska border manage to survive as a significant mass of ice by 2100 due to what Clarke calls "their height advantage."

In contrast, glaciers in the B.C. Interior and Rockies "will experience total or near-total losses of ice area and volume."

"The time to act is now if we want to defend glaciers" and their critical contribution to water systems in the Canadian West, added the 73-year-old Clarke who has studied glaciers since the 1960s. "The big uncertainty is how humans will behave."

Federal and provincial governments need to take a cold, hard look at bitumen pipeline proposals, liquefied natural gas projects and shale gas mining, because all of these export-orientated projects are geared to "putting more CO2 into the atmosphere. We have to stop that," he said.

A 2014 ranking of 58 nations on how they have responded to the threat of climate change found that Canada "still shows no intention of moving forward with climate policy and therefore remains the worst performer of all industrialized countries."

Canada is one of the world's 10 largest emitters of carbon dioxide, a club that includes China, the United States, Russia and Japan.

The global oil sector, which dominates motorized transportation, accounts for more than one-third of all reported greenhouse gas emissions.