The prospect of another Conservative government should worry the labour movement, says the president of the Canadian Labour Congress. 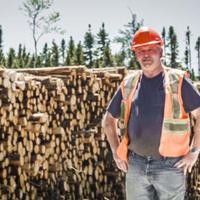 The 'Jobs or Environment' Choice Is 'False' Says Mega-Union

Hassan Yussuff, whose organization represents more than three million workers across Canada, made his comments in an interview with The Tyee focused on the year ahead.

Yussuff said the Conservatives have spent much of their time in power attacking the movement in "the most aggressive way we've seen in any government in a long time in this country," and said unions must work to recruit people to help defeat the current government in 2015.

"Back-to-work legislation is not something they even pause about when they decide to do it," he said, such as legislation imposed on Canada Post workers in 2011 during their contract dispute. "They've done it five or six times since they've been in government, and none of it was warranted."

Yussuff said the ability of workers to bargain with their employers is a fundamental right that the federal government has interfered with, despite a negotiating framework he said has been proven to be balanced and fair.

He also pointed to legislation such as Bill C-525, introduced by a Conservative MP, which unions have argued makes it harder for civil servants and workers in federally-regulated industries to form a union.

The legislation eliminates the "card check" system where workers sign cards indicating they want to be represented by a union. Under the old system in federally regulated industries, if 50 per cent plus one sign the card, workers can certify.

Under the new law, there will be a secret voting process along with the card signing. It also makes the threshold for a decertification vote lower at 40 per cent from the previous 50 per cent plus one model.

The bill was passed by the Senate before Christmas, despite flaws in the drafting of the legislation, which proponents say can be changed later.

Yussuff also said the government is also trying to bring in legislation that will "intrude" into labour jurisdictions regulated by provinces as dictated by the Constitution.

Bill C-377 would force unions to provide financial statements for public disclosure, but Yussuff said its real purpose is to try to stop union political activity.

"We need a government that is more balanced and fair to workers in this country," he declared.

Here's what else Yussuff had to say about labour's tactics for 2015, his views on strategic voting, pipelines, and more.

The Tyee: What are some of the big issues the labour movement must address in the next year?

Yussuff: "The challenge the country has faced despite the wealth we have is the unfairness of how that wealth is distributed across the country. We've made very clear indications in terms of our priorities, in terms of issues that are relevant to the labour movement to be active on... what we're hoping, because next year is an election year, is to motivate our members to one, obviously get out and vote, and two, to take some ownership of the challenges and issues and confront them, such as health care, childcare, retirement security and of course, good jobs. Our young people are struggling day in and day out."

Do you think young people understand the role the union movement has played in the past and can get behind it the way they used to?

"I think each generation has got to figure out for their own how they relate to the labour movement. I don't think we should expect that young people themselves will automatically gravitate towards the union movement, but when we do engage with young people -- our polls we do on a regular basis -- if they're given the opportunity and the circumstance, they will join a union. The problem is, of course, you've got to reach them and convince them of the necessity, and [show] what we can do on their behalf, because it's not natural for them to learn it. They don't learn it in school, and the bias in the media doesn't necessarily reflect some of the positive things we do. What they do tend to see is when we're on strike or there's a dispute in the public realm. More often than not, that doesn't speak in totality about what the labour movement does in this country."

What role will strategic voting play in the election?

"Our members are going to make some tough decisions and our affiliates, to a large extent the leadership, are challenged as to how they will conduct their individual organizations involvement in [strategic voting]... you've got to remind members what this government has done. Some of our members are very active, very aware about what the government has done. The majority of members are not aware of what the government has done. So we are obviously going to start in the new year with some political preparedness, some readiness across the country with our members... we want them to make a commitment to recruit at least one person to join them in that effort. We're hoping we'll have a large cadre of activists that will take some very strong interests into the outcome of the election."

How difficult is the pipeline issue for the labour movement? On one side you have union jobs, and on the other you have fierce opposition to pipelines.

"It is tough. There's always been debate about the environment and jobs, and those debates will continue. There's nothing wrong with those debates; I don't think those debates should be troubling for the labour movement. I think we should face them head on if we've got a good argument. Alberta, whether we like it or not, is dependent on the oilsands as part of its economy. We're not going to shut that down... [but] Alberta has to slow down the level of development and try to deal with environmental degradation. I think the labour movement has to recognize that those who are raising concerns about the environment can't be dismissed. I think we have to figure out a way to have those conversations. The reality is we've got to do whatever we have to to ensure that we don't increase greenhouse gases."