The Transit Police officer who first detained Lucía Vega Jiménez during a Vancouver SkyTrain station fare check last December said her Spanish accent was one reason he decided to phone Canada Border Services Agency, leading to her arrest and imprisonment for nearly three weeks before she was found hanging in an airport holding cell. 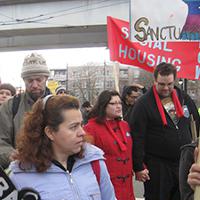 Constable Jason Schuss testified before a B.C. Coroner's inquest into the 42-year-old Mexican's death yesterday. His account contradicts what Transit Police previously told The Tyee in July, when a spokeswoman insisted that a fare evasion suspect's accent is never a factor in reporting them to the federal immigration enforcement agency.

Vega Jiménez, an undocumented hotel worker, had not paid her $2.75 transit fare when she was stopped on Dec. 1. But when her identity didn't show up in police databases, and Schuss determined she had provided him with a false name, he decided to phone CBSA to identify her.

"I understood that she had an accent when I spoke with her," Schuss testified. "With that, I could tell she wasn't originally from Canada. That's the reason I tried to identify her via CBSA."

As part of a series published this summer on undocumented migrants in the Lower Mainland, The Tyee asked Transit Police for comment on a growing number of reports of SkyTrain-related deportations.

At the time, the agency insisted that a call to CBSA would only be made in order to identify a suspect when records do not turn up in either of two police databases, and specifically never based on their accent or spoken English skills.

"The checks are done first through all our systems we have available," said Transit Police's Anne Drennan in a July phone interview. "If we come up with nothing, we would move to the next tool available to us: to make a call to CBSA."

As part of that series, The Tyee found that Transit Police reported 328 people to CBSA last year, with one-in-five of those cases leading to further agency investigation.

'She was not supposed to be here'

Schuss said that when he stopped Vega Jiménez and phoned CBSA, an agency employee told him Vega Jiménez had been previously deported, and that "she was not supposed to be here," he said. "At that point, the operator instructed me to detain her under the Immigration [and Refugee Protection] Act and that they would send a CBSA agent to come speak with her."

Border Services then dispatched one of its inland enforcement officers, Josie Perri, to the SkyTrain station. Perri testified at the inquest that she questioned Vega Jiménez in the station's staff common area, and that the 42-year-old confessed to sneaking across the U.S.-Canada border in April 2013, three years after an earlier refugee claim was rejected and she was deported from Canada.

"She said she came through the bushes in Surrey somewhere; she wasn't exactly sure [where], but did not report to a Border Services officer at the point of entry," Perri testified. "So she snuck into Canada illegally… She stated that yes, she did know she needed authorization to return, but she had not obtained it."

The role of Transit Police in reporting nearly one immigration suspect every day to CBSA has drawn criticism from municipal officials and human rights lawyers, who argue that the police force should not cooperate with the federal agency unless there is a warrant out for a suspect's arrest.

The police agency counters that it is authorized and mandated to enforce all laws, including immigration legislation. According to force spokeswoman Drennan, "We have a good working relationship with [CBSA]. But there's no actual policy in place or anything like that. It's ad hoc."

Const. Schuss testified that following Vega Jiménez's arrest, two Transit Police officers drove her to CBSA's holding cells at Vancouver International Airport, the same facility in which she would eventually be found hanging in a shower stall. "At that time, the CBSA agent [Perri] asked us if we could do that for her because she was by herself," he testified.

Perri's version of the story was that the Transit Police offered to drive the suspect, not the other way around, because she didn't have a vehicle outfitted with a protective prisoner cage. "It was something they offered up and I accepted that offer," Perri testified. "It is a normal occurrence."

The CBSA's relationship with other agencies has so far been a focus of the coroner's inquest, whose five jurors cannot find fault in Vega Jiménez's death, but can make recommendations for preventing future incidents.

In addition to hearing testimony from Transit Police and corrections officers, the role of the private security firm Genesis Security Group will be one point of inquiry during the rest of the week-long inquest.

Refugee rights and civil liberties groups have questioned the CBSA's contracting-out of guard services for immigrants, and some say they want the contracts scrapped and returned to federal officers with higher levels of training and oversight.

Today, the inquest is scheduled to hear from three staff representing the private firm.