A public inquest into the death of Lucía Vega Jiménez will hear testimony from two of the failed refugee claimant's cellmates in a border services detention centre at Vancouver's airport last winter. 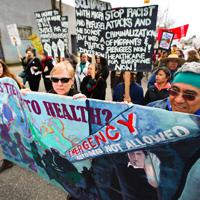 Vega Jiménez, a 42-year-old Mexican national, was found hanging in a shower stall while awaiting deportation to Mexico in December 2013.

The Tyee has obtained a partial list of witnesses set to testify at the B.C. Coroners Service inquest into her death, which starts Sept. 29 in a Burnaby courthouse and is expected to last a week.

Presiding coroner Margaret Janzen and a jury will examine evidence and hear testimony to determine the facts surrounding Vega Jiménez's death, including declaring whether her death was natural, accidental, homicide, suicide or undetermined, according to coroner spokeswoman Barbara McLintock.

The list of witnesses, obtained by a source close to the inquest but which could not be immediately verified, includes two of the Mexican hotel worker's cellmates via video conference; sources reported that both have been deported from Canada.

The document also includes several employees of the Canada Border Services Agency, which detained Vega Jiménez following her arrest on the SkyTrain by Transit Police for fare evasion in December 2013. Transit Police officers and two nurses at a provincial prison where she was held before she was transferred to the airport will also testify.

Genesis Security, a private firm contracted to guard the airport facility and transfer detainees, is also expected to testify but had not registered legal counsel as of Tuesday, McLintock said.

McLintock said the scope of the hearings will be narrow, because under provincial law all coroners' inquests are restricted to examining the circumstances around a death, but not other similar incidents -- and they can't assign blame.

"Obviously, it's going to touch on the ways these sorts of things occur, but it's not a wide-ranging inquiry," she said. "It's fact-finding, not fault-finding."

The five to seven jurors expected to sit at the inquest, however, are "free and encouraged" to issue recommendations on how to "potentially prevent future deaths in similar circumstances," she said.

"They're given reasonably wide latitude to do that, but they have to be able to tie it back to the death of Luc&iacutea," she said.

Vega Jiménez's death prompted vigils, protests and petitions from refugee advocates and the public before the coroner announced in Febuary that a jury would scrutinize the incident.

Out of four groups applying for "participant status" in the inquest, which allows lawyers to cross-examine witnesses and make submissions, only the B.C. Civil Liberties Association and Canadian Council for Refugees were accepted.

"There are a lot of unanswered questions about her death that we think need to be answered in the public interest, including the obvious question of whether her death could have been prevented," BCCLA executive director Josh Paterson said.

But a coalition of Latin American organizations, which retained immigration lawyer Peter Edelmann as counsel, expressed upset over their rejection as participants.

Latinos in Action founder Ana David, one of the coalition's members, questioned the coroner's decision to deny her group standing because the various organizations have "credibility, respect" and "a historic background" of experience as Latin American migrants.

"We were quite thrown. Anybody who represents the Latin community was denied," David said. "[Luc&iacutea] is someone who used to walk along with us when we had protests. This is someone we knew personally."

McLintock responded that such concerns would be "well-represented" by the Canadian Council for Refugees, a national refugee rights coalition, which is why it was granted status and not the Latin American community groups.

She said that the inquest is not allowed by law to become a "general inquiry into the conditions surrounding refugees... we have neither the legal jurisdiction, mandate or expertise" on such matters, adding that the coroner also hoped to avoid repetition of similar arguments by public interest participants.

"We wanted one group to bring the refugee perspective to this," she said. "Obviously, it is going to be a key issue in the inquest."

Several lawyers involved in the inquest could not confirm or comment on the witness list, saying the document is covered by signed undertakings against discussing their contents publicly.

The Tyee's interview requests to Mexico's consul general in Vancouver, Genesis Security and the Canada Border Services Agency were not returned Tuesday.