Businessman. Farmer. Activist. State senator. Born and raised in Honolulu, Russell Kokubun's career has taken a series of turns over the past four decades. But nothing as momentous, for him and perhaps for the planet, than the two years he spent as head of a state government team tasked with figuring out what life could be like in the year 2050 if Hawaii streaked towards a new model of human society. 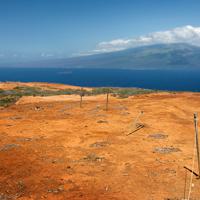 The document Kokubun's task force released, the Hawaii 2050 Sustainability Plan, is a blueprint for a post-globalization era. Not only would Hawaii grow most of its food locally and produce its energy from clean sources. The state would stop measuring societal progress only by financial metrics, teach schoolchildren to view the world as a network of fragile systems and turn sustainability into "a way of life," the plan reads, "not a technical term used by environmentalists, planners and political leaders."

Hawaii is still struggling to put the 2050 Plan into action. Honolulu has more solar panels per capita than any other North American city, leading influential groups like the Rocky Mountain Institute to call the state a "postcard from the future." But its economy couldn't survive without the 8 million visitors it hosts each year. The state imports up to 90 per cent of its food as a result, and gets 72 per cent of its power by burning imported oil. When 300,000 people marched through New York last week demanding action on the climate, this was the dilemma they confronted: a world unable to meet its own needs, except by selling out future generations.

POSTCARD FROM THE FUTURE: BY THE NUMBERS

Honolulu's rank among North American cities for most solar panels per capita: 1

Amount of its energy Hawaii wants from clean sources by 2030: 70 per cent

Amount of its energy Hawaii now gets from clean sources: 20 per cent

Hawaiians who support continued growth of solar energy: 94 per cent

Number of Hawaiians consulted for the 2050 Sustainability Plan: 10,500+

But if Hawaii is a microcosm of that dilemma, it could also be a model for solutions to it. So late this July I traveled to meet with Kokubun near the edge of Hawaii's erupting Kilauea volcano.

It'd been nearly a decade since his task force asked over 10,500 Hawaiians what kind of a society they desired for the year 2050.

"Being out in the middle of the Pacific Ocean, we have to be more self-sufficient," he said, as we watched a plume of sulfurous gas fan out to the horizon. "But so does the Earth."

Back to the land

Both Kokubun's parents grew up on Hawaii's Big Island, but moved to Honolulu after the Second World War to earn better incomes. In his youth Kokubun wanted to become a stockbroker. He left for Dallas, Texas, in the late 1960s to get a degree in business administration and then returned home to "make lots of money," he said. Yet in his air-conditioned office with tinted windows that never opened, he felt cut off from the world. "I got very claustrophobic," he said. "I decided I wanted to farm."

After quitting his Honolulu office job, Kokubun moved back to the rugged island of volcanoes, thick jungle and black sand beaches that his parents had left a generation ago. In the Big Island's north he "went door to door" looking for work, he said, and eventually got hired as farm laborer. Soon after he got married, and in 1978 he and his wife Anne bought a farm near Volcano, a village whose high elevation let them grow vegetables like zucchini, broccoli and cauliflower. There was plenty of rain and mud and their income fluctuated wildly. "But I enjoyed it," Kokubun said.

Kokubun and his wife began growing local produce at a time when Hawaii's food system was rapidly globalizing. From 1960 to 2005, mass-market tourism overtook sugar and pineapple plantations as the state's main source of income, and vegetable imports alone grew by 300 percent. Hawaii now imports 85 to 90 percent of its food. Separated from the mainland U.S. by more than 4,100 kilometres of open Pacific Ocean, its inhabitants would literally starve if those shipments ever ended.

Kokubun's main goal in those first years was to keep his farm productive. But that began to change in the early 1980s, when geothermal energy developers proposed a drill site on Volcano National Park's eastern edge. Kokubun was head of his village's community association, and he talked to scientists, biologists and park personnel to see what they thought of the project. "Everyone felt that this was a good idea, but wrong place," he said. "Not next to a national park, certainly not next to a village."

For years he led his village to protest the project. "That's how I got sucked into government," Kokubun said. As a child he had no desire to be involved in politics. But now friends and colleagues were urging him to run for a seat on Hawaii County Council, which he won, in 1984. "I gave up the farm and doors just started opening," he said. "I kind of fell through them inadvertently." By 2000, he was elected as a Democrat to Hawaii's state senate. "It was a pretty amazing journey," he said. 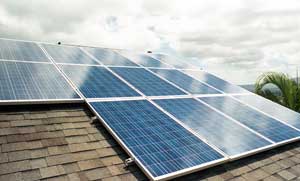 Postcard from the future: Honolulu has more solar panels per capita than any other North American city. Photo by Brody McKnight.

When Captain Cook landed in Waimea Bay in 1778, he encountered a self-sustaining Hawaiian society of up to one million indigenous inhabitants, nearly the same population as modern day Hawaii. But by 2005, the state had become one of the most globalized societies on the planet, a tourist playground that drew 7.4 million resource-consuming visitors each year, produced only a fraction of its own food, and generated up to 90 percent of its electricity by burning imported oil.

Kokubun had been a senator for five years. He was sick of dealing with "crises of the moment," he said. In a senatorial retreat he discussed creating policies that would allow Hawaii by 2050 to once again be self-sustaining, a day many of his colleagues might not live to see. "It's a hard thing for some people to wrap their brain around," said Democrat Sen. Jill Tokuda, who was part of those discussions, "that we're talking about a reality and a future and a world that does not include you in it."

With the governor's begrudging approval, Kokubun, Tokuda and others formed a task force that travelled across the state to learn what kind of society over 10,500 Hawaiians desired for the year 2050. At a Honolulu conference, nine or so high school students were asked if they planned to grow old in Hawaii. Not one raised a hand. "There was an audible gasp in the audience," Kokubun said. "We realized young people aren't going to hang around, because there's nothing here for them."

He'd realized something else too: Hawaiians weren't happy about their precarious existence in a globalized world. Yet they didn't want to shut that world out so much as redefine their place within it. Instead of blindly consuming the planet's resources, they desired a society able to meet its own needs while respecting the natural world, and the unique Hawaiian culture arising from it. It was an era of post-globalization that the 2050 Plan ended up describing, when "sustainability will be a way of life." 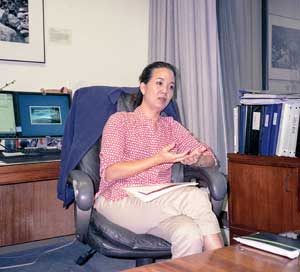 Why don't we plan the future better? Hawaiian state Sen. Jill Tokuda says it can be daunting to look so far ahead 'it means a world that does not include you in it.' Photo by Brody McKnight.

But creating a vision is one thing, and executing it quite another. "The 2050 Plan is full of wonderful feel-good stuff that's utterly un-actionable," said Jim Dator, a world-renowned futurist who helped lead outreach sessions for the plan. In them he heard a message much further reaching than what the final document describes: that a truly self-sustaining Hawaii would need to radically scale down tourism and perhaps put strict controls on immigration. Instead, Kokubun's task force produced a "glossy book full of platitudes" about living more sustainably, Dator argues. "It's just mush."

In a cafe in Honolulu's Chinatown, I met with Jackie Kozak Thiel, Hawaii's sustainability co-ordinator, who'd just arrived back in town from a climate meeting with President Obama. "I call what we're doing in Hawaii 'paradise with purpose,'" she said. The 2050 Plan may have focused more on values than hard, specific targets, but in doing so it opened up a new conversation about Hawaii's place in a globalized world. "It gave us a vision of why sustainability matters," she said.

Targets came after. In 2008, Hawaii passed the Clean Energy Initiative, for instance, calling for 70 per cent of its electricity to come from renewable sources or energy efficiency gains by 2030. The state may now be 20 per cent of the way there, after a drop in solar prices made the energy source more economical than burning imported oil, and set off a boom in rooftop solar.

And this summer, the state promised to double the amount of food it produces locally to 30 percent by 2030.

But all it takes is a short walk down Waikiki's streets choked with idling cars, past the lineups for McDonald's and Starbucks and souvenirs mass-produced in China, to wonder if something like the 2050 Plan can ever be achieved -- either in Hawaii, or anywhere else on the planet. Kokubun struggled with the contradiction too, and in 2013 he retired from government. "I decided to actually put into action what I was talking about," he said. "So I'm back on my farm now, trying to grow food for people, and impart some of those lessons [from 2050] on my grandchildren."

As we looked out at the erupting Kilauea volcano, I asked Kokubun something that had been on my mind ever since I started researching this story. Was Hawaii's vision of a post-globalization era by 2050 only relevant to a unique and isolated island society, or did it represent something much larger? "I think it's both," Kokubun said. "Hawaii [is dependant] on finite resources, but so is the Earth."

He paused, and added: "The whole idea of Earth being an island in our universe? That's not too far-fetched."