A federal regulator has approved a proposal to turn B.C.'s Lower Mainland into one of North America's coal export centres. 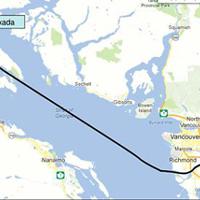 BC Stands By Approval of Large Thermal Coal Storage Expansion

Despite two years of concerted effort by opponents concerned about climate change and the health risks of coal dust and diesel exhaust, Port Metro Vancouver approved an application by Fraser Surrey Docks to build a facility to transfer four million tonnes of U.S. thermal coal from trains to barges bound for a deep sea terminal on Texada Island, then on to Asian markets.

The port's vice president of planning and operations issued a statement Thursday saying the approval nonetheless requires Fraser Surrey Docks to "meet a strict set of conditions" when it comes to safety and environmental standards.

"The decision to permit the proposed coal transfer facility at Fraser Surrey Docks was not one we took lightly," Peter Xotta said. "Through our comprehensive project review process, stakeholder consultation, as well as third-party validated environmental and health studies, it was determined there are no unacceptable risks and the project could be permitted."

Fraser Surrey Docks president Jeff Scott could not be reached by time of publication. In a statement, he said he was "pleased" with the decision.

"We take our obligation to the community very seriously, as we have for over 50 years," he said. "We understand our responsibility and will deliver on our commitment to ensure this project is operated safely and responsibly."

The Tyee first shed light on the Fraser Surrey Docks proposal in November 2012, launching a five-part series, "Cross-Border Coal War?", on the many sides of the controversy. The investigation went on to win awards from both the Canadian Association of Journalists and the Jack Webster Foundation.

From its inception, advocates such as Voters Taking Action on Climate Change have criticized the proposal and spent the past two years pushing on a number of fronts, including making alliances with coal export opponents south of the border.

"It's not surprising, but it's still disappointing," the organization's Kevin Washbrook said. "It's a sad day for local decision-making and local involvement in board decisions… the port authority is an unelected, unaccountable body deciding for itself what level of risks are acceptable for our communities."

His group warned Fraser Surrey Docks' plans would dramatically ramp up B.C.'s carbon footprint once the thermal coal is burned in Asia, arguing that Port Metro Vancouver should have taken the coal's eventual greenhouse gas emissions into account when reviewing the proposal's environmental and health impacts. The port countered by saying climate change was not within its purview.

Not only environmentalists have raised concerns about the project. The chief medical health officers of Vancouver Coastal Health Authority and the Fraser Health Authority expressed caution about the potential health impacts of increasing coal's movement through the region, and the cities of New Westminster, Burnaby and Vancouver voiced opposition as well.

In its statement, Port Metro Vancouver said its permitting process was "unusually extensive" for the proposal because of high "public interest in the project." For instance, it required an environmental impact assessment despite not being obligated to do so by the province or federal government.

But with a legal challenge in progress over the Texada Island side of the plans, and activists vowing to take the matter to regional air quality regulators, Washbrook said things aren't wrapped up yet when it comes to Fraser Surrey Docks.

"The fight isn't over yet," he said. "This will be challenged in many ways."