Observers of a megaproject planned in the Purcell Mountains west of Invermere are paying close attention to two processes playing out this summer and fall. 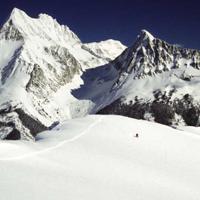 If built, the Jumbo Glacier ski resort and real estate development in southeastern British Columbia would include a village of condos, chalets, shops and hotels, aiming to attract thousands of guests and residents. It would provide 20 lifts for year-round skiing on several nearby glaciers.

But after 24 years of planning, construction has yet to start. As of now, the municipality the B.C. government created to support the project consists entirely of wilderness, with no residents, no buildings and no ski lifts.

Glacier Resorts Ltd.'s environmental certificate, a key document required by the company to start building, expires in October if construction has not started by then. Yet some critics say the company has several commitments to fulfill before it can break ground.

"This is the final countdown, and that is why there is so much attention being paid at every level throughout this summer," said Robyn Duncan of Wildsight, one of a number of environmental groups in the Kootenays leading public opposition to the project, along with the Ktunaxa Nation. Opponents say the development intrudes on valuable wilderness and that it is not economically feasible.

B.C.'s Environmental Assessment Office (EAO) granted the company a five-year environmental certificate in 2004, and renewed it in 2009. It cannot be renewed a second time, unless construction has "substantially started, in the reasonable opinion of the minister." The certificate's new expiry date is Oct. 12, 2014.

A recent B.C. Supreme Court judgment stated that in the case of an environmental certificate, "substantially started" means permanent physical construction, not temporary structures, permits applied for, or money spent.

The question Jumbo-watchers are asking this summer is will construction start before Oct. 12, and will the nature of it, in the opinion of the minister, qualify for the renewal of the certificate?

"We are going to be building bridges, pouring footings and clearing road right-of-ways," he said. "We're going to start the first day lodge and the first ski lift."

The environmental certificate that the minister might renew has 195 legally binding conditions attached to it, which compel the company to deal with various environmental and social issues.

Many conditions must be met before constructions starts, and some critics say that Glacier Resorts Ltd. has yet to fulfill them.

In June, the Jumbo Creek Conservation Society sent a letter to the EAO asking for details on the company's compliance with 31 of the 195 conditions. A dozen conditions come with "before construction" clauses.

For example, three conditions require the company to study and monitor groundwater by drilling and pump testing before construction starts in order to ensure there is enough groundwater to meet the resort's needs.

"We are not aware of any well drilling that has taken place," the society wrote. "Can the resort construction proceed in the absence of proven quality groundwater?"

There has been no such drilling, claimed Arnor Larson, a retired mountain guide who has monitored and documented the Jumbo project on his own for many years.

"It does not make sense to build roads or any type of infrastructure until they can tell us that they have a sufficient groundwater source to actually service this village," he said. "The cart is before the horse."

Costello would not speak to the company's progress on specific conditions, suggesting that the society take their concerns up with the EAO because his company "does not report to the Jumbo Creek Conservation Society."

"Do you think we would try to start construction without being in compliance?" he said.

The society's letter asked the EAO about a condition requiring the company to prohibit the use of all-terrain vehicles by restricting all vehicle access to its tenured area.

So far, the society claims, the only part of the company's tenure accessible by road is the Farnham Glacier, and the gate on the road was vandalized and has gone unrepaired for several years, allowing hundreds of vehicles, including ATVS, into the glacial alpine last summer.

Larson said the company's track record on the Farnham road does not bode well for the main access road it intends to build up Jumbo Creek, extending a current forest service road.

"Now all the ATVs, motorcycles, everything, will go up into that meadow just a kilometre or two up the road," Larson said. "It was de facto controlled because a bridge was out. When that bridge goes back in, are they going to put a proper gate there? Their track record so far on the Farnham road makes me pessimistic."

That bridge will be funded not by the company but by the uninhabited municipality, according to its administrator Mark Read.

The society also asked about the status of other pre-construction conditions, such as plans or actions related to solid and liquid waste disposal, spill prevention, grizzly bear monitoring, bird surveys, air quality and trail management.

The Ktunaxa Nation has written a similar letter to the EAO asking for details of the company's compliance.

"Many of the commitments were originally put in to address our concerns," said the Ktunaxa's Bill Green. "But our conclusion on many of them now is that they have not been satisfied."

The letters were acknowledged, but not answered. An EAO compliance team spent several days at Jumbo in late July, meeting with the company and with concerned citizens including Larsen and Green as part of an "administrative review" of the project.

Asked by The Tyee which conditions must be met before construction can start, B.C. Environment Ministry staff replied with an email.

"The EAO has selected key pre-construction conditions to review during the administrative inspection and is reviewing supporting documentation for each of those conditions," it read.

Critics like Duncan remain pessimistic that the conditions will be met on time.

"If the government was willing to enforce its own laws, there is no way [the company] could substantially start construction on this project, given the hurdles they need to be going through with the conditions outlined in the environmental certificate," she said.

"I think that the charges that have been levelled at us by (environmental groups) have always proven to be patently false and have misrepresented our actions, and they continue to do so," he said. "If they had any merit to them, then wouldn't the government have done something along the way to respond to their accusations?"