The B.C. government is considering pledging a further chunk of cash to prop up a Kootenay municipality that has no residents, no infrastructure, and no tax base. 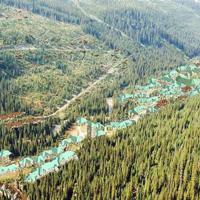 A Jumbo Summer Ahead?

The council of the Jumbo Glacier Mountain Resort Municipality recently tabled a draft financial plan that anticipates provincial government funding of $200,000 per year over the next five years.

"Why is the government giving five-year funding support of $1 million to a municipality that has no residents, no infrastructure and no investors?" said NDP MLA Norm Macdonald in the legislature on March 25. The development is planned for Macdonald's Columbia River-Revelstoke riding.

In 2013, the new municipality received $260,000 in government start-up money, a payment presumed to be a one-time grant. At the time, Jumbo's provincially appointed new mayor, Greg Deck, said he expected the funds to last a few years. "We are not building a city hall, not hiring full time people," he said last March.

Municipal finances are not the only outstanding issues for Jumbo. Others include:

Environmental certificate expiry: The certificate given to the project by B.C.'s Environmental Assessment Office (EAO) expires October 2014, if, as the extension document states, "the project is not substantially started during that time." So far, there is little evidence that construction in the municipality is underway, save for a few road upgrades to enhance glacier access.

Ecosociety lawsuit: The West Kootenay Ecosociety has filed a judicial review with the B.C. Supreme Court, arguing that the government's decision to appoint municipal councillors without any electors violates the constitution and various provincial statutes. Legal arguments are in process and a court date has not been set.

Investors: An argument often raised by Jumbo's opponents, especially NDP MLA Macdonald, is that the project has no investors. The truth of this is unknown, since Jumbo Glacier Resort Ltd. has chosen not to discuss that question publicly over the past couple of years, and was not available for comment.

Blockade: A group of Kootenay residents set up what they called a monitoring and inspection camp on the road to Jumbo last summer, stopping passing motorists to tell them the government has no process to monitor Jumbo Glacier Resort Ltd.'s activities on the glacier. The company applied for a court injunction against the camp, then dropped it. The group intends to revive the camp again this summer.

Deck added that once that grant was exhausted, the municipality's only revenue source would be property taxes levied on the owners of the Jumbo development.

The Jumbo Mountain Resort municipality was formed in 2012 after the B.C. government amended the Local Government Act to make possible a municipality without residents or infrastructure and with an appointed council.

It was created specifically to enable the Jumbo development and all-seasons resort in the Purcell Mountains near Invermere. To be constructed on Crown land, the project includes a village of condos, chalets, shops and hotels, and will aim to attract thousands of guests and residents. It would provide 20 lifts for year-round skiing on several nearby glaciers.

'There are real needs for that money': NDP

In response to Macdonald's question, Community, Sport and Cultural Development Minister Coralee Oakes pointed out that "instant towns" similar to Jumbo, such as Whistler and Sun Peaks, also received start-up money and various other government grants.

Macdonald argued that Oakes' comparison wasn't apt because those communities already had residents, investors, and infrastructure in place when they received the grants.

Oakes countered that Jumbo municipal council's budgeting for government grants beyond the start-up year is speculative, and it could apply for funding but might not receive it. She said that the development will create hundreds of jobs and that the government believes in growing the economy.

Macdonald asked the minister to confirm that Jumbo will not get any further funding before it develops a tax base, to which the minister responded that the government wants to grow the economy.

"But the minister still thinks it is a wise investment to spend a million dollars over the next five years on a mayor and council with no people, no buildings, and no investor. How does that make sense at all?"

In an interview, Jumbo Mayor Greg Deck said that creating a five-year financial plan is an obligation for all municipalities. He said grants from senior governments are a standard source of funding for municipalities, whether in the start-up phase or not.

He said council has never discussed its five-year financial plan with the government, and agreed that the inclusion of the annual grants is speculative.

"When I spoke with [The Tyee] last year, I was hopeful that development would have proceeded to the point that we would have assessable property on which to levy taxes," he said. Deck said that legal challenges and blockades have delayed that development.

In one such challenge, the Ktunaxa First Nation argued that the government did not sufficiently consult it before approving the Jumbo project. It was dismissed last week.

The Ktunaxa also argued the development would desecrate their spiritual connection with the area, which they call Qat'muk, the home of the grizzly bear spirit. The government thereby violated the Ktunaxa's freedom of religion under the Charter of Rights, the nation claimed.

The challenge was rejected by the judge, who said the government's consultation "passes the reasonableness standard." The judge did not agree that the development violates Ktunaxa spiritual values or the Charter of Rights.

"It is difficult to describe how frustrated and disappointed we are with the Supreme Court's decision," Ktunaxa Nation Chair Kathryn Teneese said in a recent news release. "Despite this setback, we will continue to explore every avenue to stop development in the heart of Qat'muk."

Since 1991, the Jumbo development has navigated a labyrinth of lobbying, debate, and significant public opposition, successfully passing through the provincial government's environmental assessment process in 2004, with a five-year extension granted in 2008.

In early 2012, the provincial government gave the project the go-ahead by agreeing to Jumbo Glacier Resort Ltd's Resort Master Plan.