The new Northwest Transmission Line passes a few hundred metres from the Bell 2 Lodge, but part-owner Mike Watling says BC Hydro is making it far too expensive for him to hook up to the electric system. 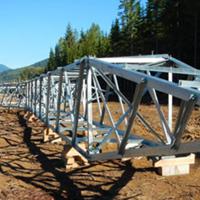 Cost of Electrifying BC's North Up $222 Million in Two Years

Watling's MLA Doug Donaldson, who represents Stikine for the New Democratic Party, says the situation is "ludicrous" and part of a pattern of the BC Liberal government neglecting major parts of the economy.

"There doesn't seem to be a whole lot of business sense going on, or if there is, it's short-sighted," Watling said in a phone interview. The lodge is on Highway 37, south of Bob Quinn Lake.

He said Bell 2 Lodge, which employs 45 people and does $10 million in business a year, spends $250,000 on diesel fuel to power generators to make electricity. "We'd be happier to throw a quarter-million at [BC Hydro] rather than at diesel each year, but nobody's suggested that yet."

Watling said BC Hydro, which he notes has a mandate to serve citizens and the province, has told him it would require a switching station to provide the lodge with electricity, that it would cost $3 million to build it, and that he'd have to pay the entire cost at the front end.

It would make more sense to amortize the cost over say 60 years, said Watling. At $250,000 a year, the switching station would be paid for in 12 years.

Not LNG? No hook ups, it seems

Watling said he's been talking with BC Hydro for two years to seek a better resolution. "It does seem a little bizarre," he said. "All I know is the answer we've been given doesn't really make sense."

A spokesperson at BC Hydro took questions by phone, but by publication time more than a day later had yet to provide responses.

The lodge is a $10-million business that already exists, but like the rest of the tourism sector it is being neglected, he said.

Other businesses in the province aren't told they have to pay the full cost of hooking up to the electrical system up front, said Donaldson. He questioned whether this is the best policy for a government that says it's concerned about jobs. "I would say it's not."

In announcing the $746-million, 344-kilometre Northwest Transmission Line, the government said it would help get small communities off diesel and give them access to cleaner, lower carbon emission electricity. The line is also intended to provide power to "potential industrial developments," particularly mines, in the province's northwest.

Donaldson sent a letter dated June 16 to Bill Bennett, the energy and mines minister, about the lodge's situation. Bennett is responsibility for the overall direction of BC Hydro.

"Potential industrial users of the Northern Transmission Line are not being asked by BC Hydro to immediately recoup the $700 million cost when they hook up," he said. "Do you believe it sounds fair that other potential business users of the Northern Transmission Line can hook up and pay off over time, while an existing tourism venture is told they must immediately pay $3 million for the switching station to hook up to the line that runs right through their own backyard?" he wrote.

A spokesperson for Bennett asked for a copy of the letter, then directed questions to BC Hydro.