Dozens of African refugees awarded $700,000 for "racial harassment" suffered at the hands of a B.C. tree-planting company -- on top of an estimated $130,000 still owing for unpaid wages -- may never see their compensation because the firm is now defunct. 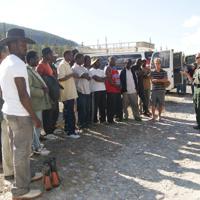 The reported closing of Khaira Enterprises Ltd. will make it very hard to collect on either amount, says a lawyer for the complainants, even though the B.C. Human Rights Tribunal ordered the Surrey company to pay workers for the racism and loss of dignity they experienced in a camp near Golden. The tree-planters described conditions in the camp as "slave-like."

A previous ruling by the Employment Standards Tribunal ordered Khaira to pay the former employees $241,704 in unpaid wages. Lawyer Eugene Kung estimated that less than half had been paid.

"It's going to be a huge challenge to collect, just on the Employment Standards portion, let alone the Human Rights Tribunal portion," Kung said. "The workers were aware from the start that the chances were very low; that wasn't the reason they pursued the human rights case -- money wasn't the motivator.

"But they're still devastated that they weren't paid for their time or the labour they expended over the course of that summer."

Calls for BC to foot the bill

Because of the unlikelihood of payment, the president of the B.C. Federation of Labour is calling on the B.C. government to foot the bill, since Khaira was contracted by it to conduct tree-planting on provincial land. The company's tree-planting work had been investigated several times since 1996. At one point, it was banned from bidding on provincial contracts for two years.

"These people were ultimately working for the people of B.C.," said the BC Fed's Jim Sinclair. "It's a terrible indictment of the government that they allowed this to happen. They continued to grant contracts to this company, even though there was ample evidence that they were undercutting and abusing people."

A Ministry of Forests spokesman said that the company had been investigated over several issues, including workplace issues and work quality, but that concerns had subsequently been "rectified." He confirmed reports the company went bankrupt "several years ago."

"While government feels sympathy for the workers, government does not indemnify court or tribunal awards that involve private parties," spokesman Greig Bethel said in an email. "Khaira was on the ministry’s list of disqualified bidders from September 3, 2010 to September 2, 2012. The ministry has not received any bids under the name of Khaira Enterprises Ltd. since that time."

Ruling on the case, B.C. Human Rights Tribunal member Norman Trerise ordered Khaira to pay each worker $10,000, plus $1,000 for each month worked, for what he agreed was discrimination on the basis of race, colour, ancestry, and place of origin.

He concluded that "the discriminatory actions of the Respondents impacted the Complainants significantly, causing them embarrassment, a degree of depression, frustration and loss of self-esteem."

Kung said that's an understatement, recounting how the spouse of one of his clients almost divorced him because she didn't believe he'd been away for months and brought no income home. Others were evicted for not paying their rents.

One worker evicted while at Khaira's camp asked his landlord to distribute his possessions to the Congolese community instead of throwing them away after being kicked out.

Kung said the stories of what the tree-planters endured are "heartbreaking."