Mayor Gregor Robertson was beaming yesterday, audaciously claiming he delivered gold to taxpayers by turning the bottom line of the troubled Vancouver Olympic Village from red to black. 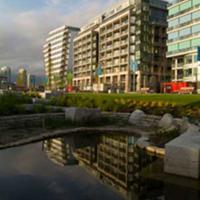 The Olympic Village Developer Is Bankrupt

Aquilini Investment Group, which owns the Vancouver Canucks and Rogers Arena, the site of the 2010 Winter Olympics hockey championship, paid $91 million for the remaining 67 units in the $1.1-billion complex. That meant city hall was finished paying the $630-million debt.

While Robertson tried to claim a $70-million surplus on the deal, he acknowledged the sum that developer Millennium was supposed to bring in, but didn't, for the waterfront land.

"The city obviously hoped that $200 million would come in and there'd be a lot of money to work with there," Robertson said at a news conference. "I think those were unrealistic hopes. The bid that was accepted was way higher than the other bids that came in. If you look at where the market went in 2008, 2009, it was unrealistic at that level and the city was never going to recover all that $200 million that was pledged in that original sale."

Said Michael Geller, a real estate consultant and unsuccessful 2008 NPA council candidate: "It's improper to suggest taxpayers did not lose a cent."

The Aquilini bid happened behind closed doors, but Robertson said "there were other buyers that had an opportunity to pursue this and the Aquilini offer was the one the receivers [Ernst and Young] chose."

When the global economic crisis hit in 2008, Olympic Village financier Fortress Credit Corp. withdrew and relied on the then-NPA council's guarantee. Leaked minutes of a closed-door Oct. 2008 council meeting, where developer Millennium got a $100-million bailout, helped turn the tide in Vision Vancouver's favour in that fall's election. A group of consultants was hired to advise the city, including controversial SNC Lavalin, for project oversight.

In early 2009, after Robertson declared taxpayers were on the hook for $1 billion, the city got a special exception to borrow enough to finish construction. It was delivered on-time for the 2010 Games, but when VANOC transferred the complex back to the city in May 2010, sales flopped. Ernst and Young was appointed the receiver in late 2010 and it was rebranded the Village on False Creek in Feb. 2011.

The full history of the Village remains hidden from citizens for the foreseeable future. City manager Penny Ballem, who remains the City of Vancouver's representative on the VANOC board, signed a Sept. 30, 2010 contract with VANOC and the Canadian Olympic Committee that agreed to keep minutes of VANOC board meetings, monthly financial statements and contracts sealed from the public until 2025.

While Olympic Village may be debt-free, it is not yet controversy free. More than 50 owners of condos, who bought in 2007 and 2008, are still suing city hall in B.C. Supreme Court for refunds over shoddy workmanship and claims of deceptive marketing practices.

"The Olympic Village was marketed as a green ‘luxury' development. It would include many cutting edge environmental technologies," according to a Feb. 6, 2012 case plan filed by the unhappy buyers' lawyer Bryan Baynham.

"The plaintiffs completed their purchases in spring/summer 2010. Contrary to what they had been told, the Olympic Village and strata lots therein were not luxury. In addition, they contained numerous significant defects, many of which are not remediable. Some of the environmental technologies did not work, and still do not work. While the market for condominiums had decreased since the time of purchase by about 0-10 per cent, the unsold strata lots in the Olympic Village were marked down 30-50 per cent. The plaintiffs were not delivered what they had been promised."

Ernst and Young vice-president Kevin Brennan does not do interviews, according to spokeswoman Lesli Boldt. She said the transaction announced yesterday meant the Aquilini family took over SEFC Properties Ltd. from the City of Vancouver and became the secured creditor. City hall, however, remains the defendant in the lawsuits.

The $91-million amount compares with the $96.31 million of liabilities mentioned in the March 12 bankruptcy filing for SEFC. The filing mentioned $92.54 million in land and buildings and $2.77 million in cash.

The Aquilini purchase is, by far, the biggest transaction at the False Creek complex after First Capital paid $45.1 million for the retail leases and BK Prime False Creek Residences Holdings paid $40.5 million for market rentals last year. It is not news, however, that the Aquilinis had their eye on the Village prior to the 2010 receivership. In a Jan. 2011 interview, Francesco Aquilini said the city wanted too much, but he wouldn't disclose numbers.

"Let me say there's a gap there, anybody who would buy that project and take it on would have to take in a serious amount of risk," Aquilini said. "We've got some partnerships with some Asian developers who have buyers waiting to purchase expensive units in Vancouver."

The Aquilinis have been on a buying spree since last September, when eldest son Francesco's divorce was settled out of court. The family has snapped up Washington vineyards, a chain of luxury restaurants and partnered with the Musqueam and Tsleil-Waututh nations to buy surplus provincial land in Burnaby.

While their Canucks missed the playoffs, the family ended a concession contract with Aramark a year early. Hundreds of UNITE HERE Local 40-represented workers were laid-off. The company is starting a non-union operation this summer.