Daniela Iraschko-Stolz made history on two fronts at the Sochi Winter Olympics yesterday. 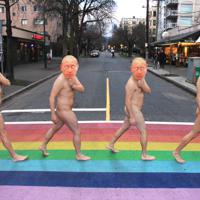 She was also the first openly lesbian athlete to win a medal at these Games, which were preceded by months of international protests against President Vladimir Putin's ban on so-called homosexual propaganda in Russia. Iraschko-Stolz, however, was reluctant to campaign for sexual orientation equality, telling Reuters "everything is being blown up bigger than it is."

She told the wire service that she had been treated fine since arriving in the Russian resort and wanted to focus on competing.

Iraschko-Stolz was briefly in first place after registering the top distance of 104.5 metres. German Carina Vogt became the first women's ski jumping Olympic champion after wind was factored into scoring.

Three of Iraschko-Stolz's fellow Vancouver plaintiffs were among the field of 30 athletes from a dozen nations: Americans Jessica Jerome (10) and Lindsey Van (15) and German Ulrike Glaesser (22). Canadians Atsuko Tanaka and Taylor Henrich placed 12th and 13th.

Reigning world champion Sarah Hendrickson of the U.S. was the first woman to jump at Sochi. The Olympic competition had been exclusively male since Chamonix 1924, even though women have flown off mountainside ramps since at least 1863 in Norway.

The International Ski Federation recommended it be added for Vancouver 2010, although president Gian Franco Kasper expressed his reservations, claiming the sport "seems to be not appropriate for ladies from a medical point of view."

In 2006, the IOC decided to add only ski cross for the 2010 Games. The sport was popularized by the made-for-TV ESPN X Games and had less history and fewer athletes and nations competing than women's ski jumping.

Women's ski jumping had its first world championship in 2009, with Van the winner. The IOC finally added women's ski jumping in 2011, along with team events in figure skating and luge, halfpipe skiing and mixed relay biathlon.

"If you look at the sport now, it is much more compact with much more quality than two years ago," IOC sports director Christophe Dubi said at the time.

The case to include women's ski jumping in the Olympics started in early 2007, after Calgary's Jan Willis, the mother of Canadian ski jumper Katie Willis, complained to the Canadian Human Rights Commission. The federal Conservative government agreed to a settlement in 2008 that it would lobby the IOC on the ski jumper's behalf. Then-minister of state for sport Helena Guergis never met with IOC president Jacques Rogge.

Enter Deedee Corradini, the ex-Salt Lake City mayor, and Vancouver lawyer Ross Clark, who represented the women on a pro bono basis. A court petition was filed in May 2008. Frustrated Willis and four Canadian teammates joined in March 2009.

When the IOC went to Denver for executive meetings that month, Willis and Van traveled there to publicly call for a meeting with then-IOC president Jacques Rogge. The dour Belgian aristocrat, whose term as IOC president ended last year, was steadfast that the ruling would stand and confident the courts would agree.

"It's very disappointing and it's hard to take. We put our lives into this, we are so dedicated, we really want to be at the Olympics," Willis said in Denver. "The judge will hopefully give us the decision we want."

The Vancouver Organizing Committee (VANOC), represented by lawyer George Macintosh, argued during the five-day hearing in April 2009 that the IOC controlled the Games and VANOC had no right to ask the IOC to add a women's ski jumping medal event.

Countered Clark: "It is VANOC's part in the putting on of ski jumping events that are open to men but not to women. Not the IOC's decision-making process."

Justice Lauri Ann Fenlon delivered her verdict in July 2009. The heartbreaker was upheld on appeal and the Supreme Court of Canada chose not to hear the case.

Fenlon agreed the 2006 IOC decision was discriminatory, but was powerless.

"There will be little solace to the plaintiffs in my finding that they have been discriminated against; there is no remedy available to them in this Court," Fenlon wrote in her judgment. "But this is the outcome I must reach because the discrimination that the plaintiffs are experiencing is the result of the actions of a non-party (IOC) which is neither subject to the jurisdiction of this Court nor governed by the Charter."

Willis retired from the sport, opting to study engineering at McGill University in Montreal.

But yesterday in Sochi, women finally got to fly, and one of the "soaring 16" from the Vancouver case became a runner-up in Russia.