In spring 2003, Peter Janes decided to do something most people only dream of -- that is, if they think about it at all. He left behind an academic education and the urban life that went with it to move to a small island off British Columbia's coast. Appalled at what he saw as industrial humankind's destruction of the natural world, Janes figured the most honest response was to build an alternative system: by producing his own food, building his own house and generating his own power. 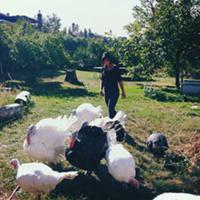 Feast of the Sacrifice

"I wanted to physically make the world a better place," Janes said. With his family's help, he bought 40 acres of forested land on Denman Island. It came with two trailers. Janes and a girlfriend he's no longer with moved into one, and promptly sold the other -- "a big, ugly, white vinyl doublewide," he said. They planted a vegetable garden and got some chickens. Self-sufficiency "was definitely an ideal," Janes explained, "but we were doing everything we could" to achieve it.

That ideal has since become an influential driver of North American culture. It's in The 100-Mile Diet. The rise of agritourism. The urban gardens of Vancouver, Detroit, Brooklyn and Mexico City. Bill McKibben bestsellers like Deep Economy and Eaarth. The Global Village Construction Set. Modern Farmer magazine. Resurging farmers' markets. The Degrowth movement -- a "shift away from our current industrial society," as adherents put it -- across North America and Europe.

For Janes, it now presents a philosophical dilemma. After 10 years striving to build a self-sustaining farm on Denman Island, he's struggling with questions that probe his life's meaning. Assuming he could cut all ties to the industrial system -- and that's "a very tall order," he realizes -- would it be worth the immense time and energy he must continue expending for the next five, 10, 50 years? Can the actions of a few people in the woods, he wonders, truly make the world a better place?

Janes' green awakening isn't traceable to a single moment. There was no Exxon Valdez-type catastrophe that shook him out of his urban stupor. He recalls a growing dissatisfaction with the insular academia of the University of Victoria, where he took anthropology and environmental studies. And he recalls a gnawing sense, as articulated by writers like Wendell Berry, who he was reading at the time, that few things sacred can survive an industrialized society bent on conquering the natural world.

Around this time, Janes embarked on a "crazy walk," he said, from Cape Scott on Vancouver Island's north tip, to Victoria, 500 kilometres southeast. He hung out with lots of activists, and began to notice disconnects between their comfortable lives -- "drinking black tea with white sugar," for example -- and the ecological injustices they railed against. "That was a big catalyst for me," he said, "that it doesn't make sense to be upset about all this stuff but then be supporting it."

Janes dreamed of an education centre in the woods. Blending farming, spirituality and outdoors skills, it would give people the tools to live less destructively. Arriving on Denman Island in 2003, though, he got sidetracked learning his own new skills. Slaughtering animals was one of them. "I'm a bit of a bull, a hard-headed person," he said. Yet he recalls feeling "pretty emotional" shooting his first sheep. Its carcass bled onto a feed pile, and other sheep munched obliviously on the bloody grain.

That first year some university friends stayed over the summer. Even with their help, Janes was learning that true self-sufficiency would be much harder than he'd thought. Going off the electrical grid was prohibitively expensive, the farm itself produced almost no income and he needed money to buy food and tools. So he took menial labour jobs when he could, trying not to enter the winter too burdened with debt.

History is full of hard-headed idealists like Janes. In 5th century BC, an Athenian named Diogenes renounced his possessions to live in blissful squalor (and later befriended Alexander the Great). "One of the first back-to-basics freaks in recorded history," claims one account. More recently, during the 1960s and '70s, up to 100,000 Americans fled to Canada, some of whom started communes in B.C.'s wilderness. Kurt Vonnegut's son, Mark, lost his mind at one northwest of Vancouver.

Janes is unsure he could handle the social stress of communal living. "That comes with all its own problems," he said. But family to him is important. Janes met Magdalene Joly, his partner of nearly six years, in a friend's backyard. Joly had dropped out of music school and was spending lots of time on Denman, drawn to a sense of place she found lacking in cities. She was also drawn to Janes, his self-reliant ideals and stubborn efforts to achieve them. "He can basically do anything," she said.

Not long after, she moved onto his farm with her son Raphael. Joly, a trained herbalist and nutritionist, brought a formidable skill set. She baked steaming loaves of bread and made herbal medicines and teas. What her family didn't use they sold in local markets and caf&eacutes. In a western culture obsessed with mobility she loved the challenge of staying put, of keeping animals alive, the taste of freshly picked kale. "The nature of society's problems lies in being alienated from the land," she said.

Where Janes' hard-headedness could verge on cynicism, Joly strove to be earnest and optimistic. "We sort of balance each other out," she said. Slowly money came in. Janes sold fruit and nut tree seedlings he’d propagated at his Tree Eater Nursery, and crafted “pointed hoes” and other tools on a homemade forge. Joly planted a huge garden, and this year launched a community supported agriculture program, delivering to eight local families weekly boxes of fresh produce and homemade specialties like nettle pesto.

Yet it sometimes seemed the further they fled the industrial system, the more tied to it they felt. Years of hard work accumulated, and still Janes and Joly's lifestyle wasn't possible without store-bought staples like rice and flour, diesel for their pick-up truck, and BC Hydro's power. "There were a lot of people who came [to B.C.] in the '70s and tried to do all the same stuff as us," Janes said. "Then they all got older and stopped." He went on: "I don't want that to happen, but who knows."

There was little sign of Janes and Joly stopping soon during a recent winter morning on their farm. "Uh oh, the geese have escaped," Janes said, taking pursuit as '80s rock wafted from a distant stereo and chickens squawked nearby. An almost finished two-storey wood house -- whose beams Janes had logged, milled and assembled -- stood stark against the forest clearing's fog. Joly squished through some mud to pick kale that tasted especially sweet and nutty. "Frost does wonders for it," she said.

Still, they wondered what it all added up to. "I wish we had 10 more generations to heal our planet's wounds," Joly said. "But I sometimes worry that we really don't, and then I start to feel like, 'What am I doing living on this little island?'" Some days the answer seems clearer. After a Scandinavian man emailed recently about buying one of Janes' homemade tools, Joly's nine-year-old son Raphael told her how inspired it made him feel. "I can see that we've made a really positive imprint," she said.

A new generation is also finding inspiration in the do-it-yourself ideals of local farming. Last July, Vancouver opened North America's largest urban orchard, one of 446 community garden plots built across the city in 2013. "On some campuses," the New Yorker reported, "a junior year spent weeding an asparagus bed has become as popular as studying abroad." It's because "there's a deep drive in humans to create their own existence," self-sufficiency guru Marcin Jakubowski told the magazine.

Janes wouldn't disagree. It's just that after 10 years, he's unsure what wider good his own deep drive has served. "I now know by direct experience how hard it is to shift away from the momentum that our society has," he said. But in the process he and Joly have created their own existence to a degree most people could only dream of. "What does success look like to you?" Joly asked him. "How do you know when you've reached that point?" Janes paused, then quipped: "I'm already onto the next thing by then."