The Kootenay Co-op started out as a rural hippie bulk-organic-food-buying co-op in the 1970s. Now it's about to build a $23-million natural foods store and mixed residential-commercial development in its hometown of Nelson, B.C. 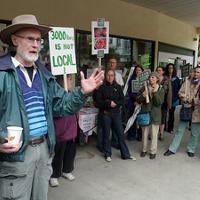 Has 'Local' Food Gone Too Far?

Last year the co-op bought the old Extra Foods supermarket in downtown Nelson, planning to tear it down and redevelop the site over the next two years.

Rather than allow a few million dollars to leave the community and fill up the bank account of a big-city developer, the co-op formed its own development company -- Nelson Commons Holding Ltd., a separate entity from the store. It's put together an ambitious plan for what it's calling the Nelson Commons, which will occupy nearly an entire city block at the east end of downtown Baker Street.

The project will include a much-enlarged co-op store, 54 residences, six to eight other commercial tenants (chosen to fit with the co-op's values), extensive public green space, underground parking, advanced green building, innovative energy efficiency technology and an approach to its ecological footprint that the co-op calls "density with artistry."

So far, the active and opinionated co-op membership is generally united behind the plan, with many meetings and much information shared online. But there's no doubt the stakes are high.

"The majority [of members] are excited and have an incredible amount of trust that we will make sound decisions, that we will not build some money-losing monstrosity in the core of downtown," says the co-op's marketing director Jocelyn Carver.

If the project succeeds, it could set a new standard for what member-owned organizations can achieve as an alternative to conventional big and small business.

Andy Broderick, vice president of community investment at Vancity, has experience in both the U.S. and Canada and is familiar with Nelson Commons. He thinks this kind of initiative is rare.

"There are not a lot of towns Nelson's size where you will find this kind of thoughtful downtown development that ticks so many boxes," he says.

And with Nelson and District Chamber of Commerce executive director Tom Thomson calling the Kootenay Co-op "one of the best in western Canada" in terms of the vitality of its membership and financial stability, there's a lot of hope that the co-op can pull it off.

The current co-op store has been overcrowded for years, and over the past decade managers have put $2.5 million into a savings account earmarked specifically for an eventual move. (Management has had to repeatedly guarantee to its members that the new store will have the same homey, gathering-place atmosphere as the current one.)

They put $1.2 million down and Nelson Commons Holdings Ltd. holds the mortgage for the other $2.3 million. The co-op is spending about $1 million in pre-development costs and there will be a member loan program in October which they expect will raise $1-1.5 million from the membership.

According to project manager Russell Precious, the co-op didn't expect to secure such a significant piece of property in the core of downtown Nelson for the Commons. But once it did, it realized it had a much bigger opportunity at hand, one that could include housing and commercial development.

"The City of Nelson's downtown development plan identified that piece of property as the one most in need of site repair, and suggested a mixed-use development," Precious explained.

Precious, who lives in Nelson, founded Capers natural food stores and the Naam Restaurant in Vancouver and has been involved in several similar projects in the U.S. He says the co-op plans to use as many local trades people, lawyers and engineers during construction as possible.

"We're going to put close to 100 new people living in the heart of downtown, and if it is successful I think you will start to see other residential developments start to happen in downtown Nelson, making it more attractive as a place to settle," Precious says.

Fifty-four housing units go on pre-sale in September, before any construction begins. If about 80 per cent of them don't sell by the end of the year, the co-op will drop the residential part of the plan and regroup. One option is to leave the current building standing and build a new store in it.

But Precious seems confident. Last year the co-op put out an online questionnaire to find out how many residents might be interested in buying, and what kind of accommodation they would be looking for.

"We had a very strong response, and that gave us the impetus to move forward," he says.

'Why is this not the norm?'

In 1990, when the Kootenay Co-op already had a downtown store for 15 years and most of its counterpart food co-ops in rural B.C. had already folded, it became the first retailer in Canada to decide to sell only organic food.

Jump ahead a couple of decades: at the same Baker St. store location in 2012, the 10,000-member co-op racked up $11 million in sales. It's the largest independent member-owned natural food store in Canada and a respected player nationally in organic retail circles.

Its success stems from a mix of business smarts and an adherence to cooperative principles like democratic member control and member economic participation. It takes its role in local economic development seriously and is an activist for regional agriculture, developing partnerships with farmers and other food producers.

Nettie Lack is the head of the Kootenay Local Agricultural Society, and she farms eight acres of vegetables near Nelson. She says that if the co-op discovers an item that consumers want, they actively encourage local suppliers to fill the niche.

"They told us people wanted bok choy. So we started growing it, and other growers followed suit. I grow 43 varieties of heritage potatoes. The co-op clamours for things like that."

The co-op already has its first commercial tenant for the future building. B.C. Wineguys, which sells only B.C. wine, will be moving there from its current semi-obscure location on Kootenay Street. Owner Jon Langille says it's a perfect fit.

"Why bring wine from halfway around the world?" he asks. "Why not keep the money in the province, keep B.C. farmers working, and create less carbon?"

The co-op thinks of this development, and its aggressive pursuit of local, as a new way of doing business.

"This is a new kind of option where you can leverage your social and financial capital to in fact be your own developer," says Carver. "You can capture those profits and you can reinvest them in your community as part of the triple bottom line (economic, ecological and social) approach. So it is an example of a new economy, what a healthy whole economy can actually look like.

She stops mid-sentence and throws out a question that appears to mystify her: "Why is all that not the norm for doing business?"

Nicole Chaland thinks cooperatives could make it the norm. She's the program director for the Certificate Program for Community Economic Development at Simon Fraser University, and she's familiar with the Nelson Commons.

"Co-ops are a special type of locally owned businesses because they give an opportunity to practice democracy. Democracy is a muscle; you use it or you lose it," she says. "If assets and wealth are held democratically, that is an incredible amount of power. To be able to influence the design of an important piece of land like this one... I mean, mixed-use buildings, that is high-road stuff, that is smart growth."

Chaland says that kind of democracy "ripples out in the community," helping people build their ability to get along, make decisions together and ultimately govern well, she says.

Affordable housing for the Nelson Commons remains a challenge. The co-op's original plan was to have some housing units available below market value. But they abandoned this for reasons that will sound familiar to anyone who has thought much about affordable housing: it would drive up the price of the regular units and make them difficult to sell. Instead, the co-op will make a donation to the City of Nelson's affordable housing fund.

"We will be writing them a cheque for $54,000. That's $1,000 per door. They seem really pleased with that," says project manager Precious. He says this raises the bar from $200 per door that two private condo developers contributed to the city recently.

But for now, the sod has yet to turn for the Nelson Commons. The old Extra Foods building, a nondescript, 1960s-style supermarket barn, still stands. The local roller derby team uses its huge floor to practice, and Kootenay Co-op Radio rents out its parking spaces as a fundraiser.

Across the street, a local non-profit group is renovating and revitalizing the old Civic Theatre that closed several years ago, leaving Nelson with no movie theatre -- another big project that has ignited a successful fundraising effort over the past year.

Carver says that's indicative of Nelson: when projects take off, they really take off. And that's why she has no doubt the Commons will be a success.

"Nelson is full of examples of businesses, resources, organizations and initiatives that you would expect from a much larger more urban community and culture," she says. "The right people gather around the right ideas at the right time, for all the right reasons. That is what happening here."