On Jan. 22, 1964, three men gathered on the U.S.-Canadian border with plans to change the western landscape forever. 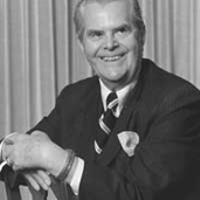 WAC Bennett Would Be NDP Today

Those men -- no less than U.S. President Lyndon Johnson, Canadian Prime Minister Lester Pearson and B.C. Premier W.A.C. Bennett -- had come to ratify the Columbia River Treaty. Under the treaty, the turbulent waters of America's fourth-largest river would be bridled behind a series of four dams.

No longer would the Columbia River overrun its banks as the snow thawed, flooding the towns built along its banks. Now, the river would be tamed and put to use, producing hydroelectricity to supply power for the booming post-war population.

But in spite of the benefits, controversy over the treaty still festers nearly 50 years later. Joseph Hughes has witnessed the debate firsthand. As a city councillor for Nakusp, B.C., he represents a populace directly affected by the Columbia River Treaty.

The construction of the Keenleyside Dam transformed his riverside town into a lakeside one, at the cost of farmlands, accessibility and natural resources. This left a "very deep-rooted scar" among community members, Hughes says.

The Spicer Farm grows what Hughes says are "the best organic carrots, probably in the world." The farm sits on the edge of Nakusp, where its fields have been tended since 1904. The Spicer family itself has cared for the land since 1948.

Talking to its owners, Hughes learned how almost half the farmland was flooded in 1969 as a result of the Columbia River Treaty. Too often, Hughes says, stories like the Spicers' are "discredited or pushed aside."

"Realizing what people went through starts to make you realize just how important this treaty is, and what it meant for our province when they flooded the river system," says Hughes. "When you talk about all the consequences of flooding it, you start to question if this is really such a good project."

The bargain struck under the treaty was that Canada would build three dams -- the Duncan Dam, the Keenleyside Dam and the Mica Dam. A fourth dam would be built on American soil.

In exchange for operating its dams, Canada received a one-time payment of US$64 million. Additionally, Canada would receive power benefits from the hydroelectric operations downriver in the United States -- a provision known as "Canadian Entitlement." For the first 30 years of the treaty, Canada sold these benefits for $254 million. After the sale expired, British Columbia started to receive power benefits worth up to $300 million a year.

But for all the economic benefits to be possible, Canada had to sacrifice 60,000 hectares of valley land. Creating the dams required farms, First Nations sites and forests to be submerged. Almost 2,300 people were impacted and a dozen communities displaced.

Hughes admits, the damage has already been done -- "obviously, they can't flood it again" -- but he believes the rights of ordinary British Columbians could still be trampled if the upcoming 2014 treaty renegotiations fail.

"Today it's just talking about a treaty over water, but I think it symbolizes the need for B.C. and the citizens of B.C. to regain the right to their resources," says Hughes.

"The fact that it's coming up for review is monumental. This is not just another contract, another relationship with other jurisdictions, whether it be the States or Alberta or whatever. This one is really important, and it's our backyard. So we absolutely need to be involved in it. We can't just let it happen by itself."

The Columbia River Treaty can only formally be altered or discarded in 2024, a full 60 years after the ratification of the original treaty. However, British Columbia and the United States must hammer out the changes a full 10 years in advance, according to the treaty's terms. That makes 2014 a pivotal year for locals and community politicians like Hughes, whose very surroundings are affected by the dam system.

Hughes joins a fevered political field, prepared to tackle the treaty. In 2011, MLA Bill Bennett from Kootenay East was appointed by the B.C. Liberal government to represent the province in the treaty renegotiation. He is running for reelection this year.

Another incumbent in this provincial election, NDP MLA Norm MacDonald from Columbia River-Revelstoke, published a statement identifying the renegotiation as an opportunity "to be more fully compensated for the losses that have been borne" by the Kootenays.

Concerned that major political parties are more blinded by "lobby groups and large-budgeted personal interest groups," Hughes has chosen to run as an independent in his campaign to be MLA. His platform is not to abolish the treaty entirely, merely to tweak it.

On the environmental side, Hughes advocates for a 40-foot drop in the Keenleyside Dam's basin. He hopes that a lower water level will help restore the fragile riparian zones along the edges of the river. The riparian zone would foster insect and bird life and serve as a buffer between the forest and water.

Furthermore, Hughes would like to see the fish habitat restored and more fish ladders installed, to enable migrating species like salmon and steelhead to surmount the dams and return to their traditional breeding grounds.

But when it comes to the economics of the treaty, the issue becomes more contentious. A recent article in the Portland Tribune suggests that the U.S. might seek to terminate the treaty, or overturn large swaths of it.

The article quotes Mike Hansen, a spokesman for the U.S. government's Bonneville Power Administration, as saying, "We believe that we are significantly overpaying."

He adds, "When we say significantly, we mean significantly." Hansen and other critics object to the financial burden of the Canadian Entitlement program, valued between $250 and $300 million.

Hughes says such criticism, however, ignores the enduring economic impact of the dam system. Just because the dams have been built and the flooding completed doesn't mean communities like Nakusp don't continue to suffer, he argues.

"The damage happens every year. It's not something that came and went. Every year, our farms don't exist. Every year, the environmental cycle of our valley continues. Another year is another 365 days of it being handicapped," Hughes says. "It's probably easier to think that we've been properly compensated, but I don't think that's the case."

Hughes points out that, because of the large reservoirs of water, some towns rely on ferries for transportation. This generates a "huge bottleneck" for business growth, he says. He also worries that responsibility for the aging dam infrastructure will be shouldered by British Columbia alone, without help from the U.S.

In other words, for Hughes, a renegotiation of the Columbia River Treaty means nothing less than survival. "Right now, a lot of our small communities are dancing on a thin blade about existing in the next ten years or fading into some extremely troubled times."