Industry and government repeatedly claim that hydraulic fracturing is safe because it is a well-regulated technique proven in the field over 60 years. 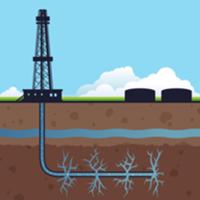 It that myth or reality?

A good person to ask is Anthony Ingraffea, a short and engaging scientist who knows how to separate fact from fiction in the shale gas industry.

On Dec. 14 of last year the Cornell University engineer, one of the world's foremost authorities on the science of hydraulic fracturing, gave a stunning talk on the myths and realities of unconventional shale gas development to a room full of Calgary academics and oilmen.

He did so with some trepidation in the oil and gas city, even though he has given some 120 public talks on the subject over the last four years to rural and urban audiences.

"The playing field isn't level," he told the Tyee. "Oil and gas companies are tremendously wealthy and have very loud speakers. They can buy TV and full page ads and place them wherever they want."

As a consequence, Ingraffea feels it is his duty as a scientist to provide missing information, challenge outright lies, and expose the uncomfortable science about mining methane from shattered rock.

True to form, Ingraffea presented science, little known by the public, that was highly critical of the practice of hydraulic fracturing. He documented proven and repeated cases of groundwater contamination due to shale rock fracturing as well as chronic methane leaks (a climate change driver) at nearly seven per cent of all new well sites.

"I don't imagine things. I don't blog things," he told an attentive audience of more than 100 petroleum types and academics. "I'm a licensed professional engineer in the state of New York. I'm trying to be as accurate as possible."

Ingraffea developed one of the first computer simulation models for hydraulic fracturing. For the last 20 years the scientist has studied the non-linear propagation of fractures in rock, concrete, dams and shale formations containing methane. During that time, Ingraffea, who lives overtop the Marcellus shale formation in upstate New York, has also consulted regularly with companies such as Schlumberger.

He also knows that the practice of hydraulic fracturing or the blasting of deep rock formations with high-pressured slurry or water, sand and toxic chemicals has spurred passionate public debates in rural communities from South Africa to New Brunswick. His own state of New York placed a temporary moratorium on the brute force technology.

So what does Ingraffea have to say about the familiar sounding claim made by Natural Resources Canada that "hydraulic fracturing has been used by the industry to safely stimulate oil and gas production in North American conventional reservoirs for more than 60 years"?

Or the claim made by the Canadian Association of Petroleum Producers (CAPP) on its pro-fracking website that "hydraulic fracturing is a safe activity regulated by government"?

More myth than fact, these claims contain only a fractured kernel of the whole truth, says Ingraffea.

A small U.S. oil firm did indeed perform the first commercial frack job in 1947 in Kansas on a conventional gas well using 1,000 gallons of napalm as well as sand from the Arkansas River.

But that's not what is happening in Pennsylvania, Texas or northern British Columbia today. Now industry injects millions of gallons of water into wellbores two miles deep that then angle or deviate horizontally another kilometre underground. They then break up the rock with up to 40,000 units of horsepower onsite and at pressures so extreme that the practice triggers small earthquakes.

Only in the last two decades have four different technologies made it possible to fracture deep shale rock formations one to two kilometres underground. They include directional drilling (wells that go down a kilometre and then extend horizontally for another kilometre): the use of millions of litres of fracturing fluids including sand, water and toxic chemicals; slick water (the use of gels and high fluid volumes at 100 barrels a minute) and multi-well pad and cluster drilling (the drilling of six to nine wells from one industrial platform).

"All four of these technologies had to come together to allow shale gas fracturing," says Ingraffea.

The first horizontal shale gas well was drilled in 1991; the first slick water fracture took place in 1996; and the use of cluster drilling from one pad didn't happen until 2007.

Until a decade ago it just wasn't possible to open fractures in walls of shale rock 20 metres thick a kilometre under the ground with 20 million litres of fracking fluid pumped by 20,000 worth of horsepower to drain trapped methane in an area as large two kilometres by one kilometre.

Expertise is also limited. Of 75 oil and gas firms that recently invaded Pennsylvania to develop the Marcellus shale play, only a half dozen had any experience combining all four technologies.

So the industry claim that hydraulic fracturing is a proven 60-year-old technology is just that: a provocative myth containing a pebble of truth.

The real facts are much more nuanced, adds Ingraffea. Shale gas fracturing is at best a decade old development based on four new technologies that are still being refined.

As such current shale gas fracturing is an ongoing science experiment with few if any controls. Moreover research on its impacts remains scanty at best. Nor is it a standard operating practice due to its cost, says Ingraffea.

Most petroleum engineers know the truth too. A 2008 presentation delivered in Tulsa, Oklahoma, included a slide that jokingly called hydraulic fracturing a proven technology except for a long list of unknowns and uncertainties including "How Deeply they Penetrate; Their Vertical Extents; Their Symmetries About the Wellbore; Their Geometries At the Perimeter; Which Directions They Go; What their Conductivities Are."

Given the relative newness of the multi-faceted technology, its health impacts have not been adequately explored either.

"There has been insufficient time to conduct scientific investigation of the impacts due to the process itself and inevitable accidents," says Ingraffea.

Advice from an expert

At the end of his Calgary talk Ingraffea offered two critical conclusions on hydraulic fracturing of shale gas and tight oil to the Tyee.

First and foremost, "Don't allow it (hydraulic fracturing) if it is not already happening in your region," he says. The threats to groundwater as well as the exacerbation of climate change from chronic methane leaks are just too serious.

"We should be ramping down fossil fuels."

For jurisdictions such as British Columbia that have already allowed the practice with little scientific study, he advised slowing down as well as rigorous regulations on hydraulic fracking because the complicated technology will likely continue due to "political and economic momentum."

New rules on hydraulic fracturing must be developed to protect public health as well as water supplies. These rules must be actively monitored and enforced.

That means full disclosure on fracking fluids, widespread groundwater baseline monitoring, no-go zones and regulatory bodies that actually defend the public interest as opposed to promoting development. "Industry will have to accept greater transparency which they will actively refuse."

Concludes Ingraffea: "The primary purpose of government is to protect the people. You should not make public policy before you have done the science on fracturing."