The shale gas industry claims that it is doing everything it can to minimize its impact on forests and farms, but therein lies the resource's second major myth. 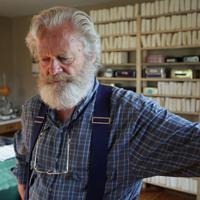 Industry lobbyists such as Canadian Association of Petroleum Producers (CAPP), for example, claim that a natural gas well site is about the size of two car garage and that "the use of multi-well drilling pads have greatly reduced the area of land disturbed in drilling operations."

EnCana, a big shale gas player, adds its own twist to the claim: "One 250-by-250-metre-square multi-well pad produces some 15 square kilometres of resource, essentially replacing several hundred vertical wells and well sites, along with their associated roads and pipelines. The result is enhanced environmental performance through minimized land disturbance."

But Anthony Ingraffea, the Cornell University professor of engineering we met in the first article in this series, and who has long studied the science of rock fracturing and consulted to industry, says that frackers aren't telling the whole story about their impact on landscapes.

"First of all how does the industry reduce impact in places where high volume hydraulic fracturing has never been done before?" asks Ingraffea.

In other words how can a 10-year-old shale gas industry boast about minimizing disturbance in the wilds of northern British Columbia, the grasslands of Wyoming or farming communities in Pennsylvania?

But Ingraffea's rebuttal doesn't stop there.

Sixteen wells on one pad

The practice of drilling up to 16 wells on one industrial pad was first developed in northern British Columbia.

It was not done to minimize the industry's environmental footprint, but to concentrate machines and material in one place in order to reduce costs and accelerate well approvals.

Moreover these industrial fracking pads, from which wells angle out in all directions over two km underground, represent but the early stages of exploration. It doesn't reflect the density of development needed to extract shale gas overtime. A 2012 Alberta study noted that "widespread commercial development... will require significant investment in surface infrastructure facilities and roads" and much greater land disturbance.

Given that only 6500 wells sites have been drilled out of a proposed 150,000 for Pennsylvania's Marcellus shale gas play, Ingraffea says "I don't see any reduction in impact."

Saying that multi-pad wellsites will reduce the number of vertical single wells on the landscape is also a prevarication. Shale gas is just too expensive and complex a resource to be developed by vertical wells conventionally spaced at one or two wells per section of land.

"It is a false comparison," says Ingraffea.

By any honest measure the industry is a formidable land disturber. Both EnCana and Chesapeake Energy, two large shale gas players, have assembled separate land bases equal in size to the state of West Virginia for shale gas drilling alone.

Both companies are now actively fragmenting these geographies with multi-well pads every two miles by one mile.

Each multi-pad well site looks and performs like a busy factory site serviced by a fleet of hundreds of trucks for over a year. The site must also import vast volumes of water, chemicals and sand often quarried thousands of kilometres away.

A shale gas frack factory may also include wastewater ponds, the venting or flaring of methane and associated toxic gases, heavy road construction as well as extensive pipeline building.

At one EnCana multi-well site in northern B.C., the company consumed more resources than a small city: it injected 417 million gallons of water along with nearly 80,000 tons of sand as well as eight million gallons of fracking chemicals.

Given the intensity of such industrial sites both farming and First Nation communities in northern B.C. have complained bitterly about five-acre single well sites as well as 20-acre multi-well pads due to industrial traffic, property devaluation, air pollution, groundwater contamination and endless noise.

As a consequence the sheer scale of the industry and activity around multi-pad well sites inevitably turns rural communities into "an industrial site," says Ingraffea.

The scientist, who has visited shale gas factory sites across Pennsylvania, adds that the industry has flattened entire mountains and filled whole valleys to accommodate monstrous multi-acre drilling sites.

Land disturbance by the shale industry is highly significant too. A 2012 US study concluded that shale gas development will dramatically change the quality of both private agricultural land and public forests. According to Patrick Drohan, an agricultural researcher at Penn State, "shale-gas development could substantially alter Pennsylvania's landscape."

In addition "the development of new roads to support drilling could affect forest ecosystem integrity via increased fragmentation." The industrialization of northern forests could also place "headwater streams and larger downstream waterways at risk of pollution," according to Drohan.

So the use of multi-well pads and cluster drilling, whose cumulative impact remains unstudied and largely unregulated, does not really reduce impact at all.

In fact their very deployment "facilitates and prolongs intense industrialization and leaves a larger and long-term footprint," says Ingraffea.

The health impacts on rural communities are also considerable. They include noise and light pollution; nitrogen oxide emissions; fracture fluid spills; venting; mini-earthquakes and accidental releases of toxic gases such as hydrogen sulfide.