University of British Columbia's law school is offering a new course about public access to justice. One of its teachers oversaw deep cuts to legal aid for the poor, former BC Liberal attorney general Geoff Plant. 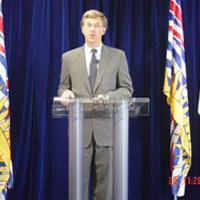 That has prompted a prominent poverty law advocate to send a letter of protest to UBC's law school dean urging changes to a course that seems "quite unbalanced." But the dean, citing academic freedom issues, won't share the letter with Plant or other course instructors.

Today, if your income falls below the poverty line, it's very difficult to get legal representation in B.C.

Thanks to cuts made by the provincial government to B.C.'s Legal Services Society beginning in 2002, the majority of legal aid offices in the province were shut down and the services covered by legal aid drastically reduced.

Access to justice by low-income people has been minimal ever since. It's an issue lawyers in British Columbia struggle with, and one the University of British Columbia seeks to address with its new course Access to Justice & the Future of the Legal Profession.

But instead of recruiting lawyers who have worked with marginalized communities, or featuring members of those communities as guest speakers, the course will be taught by four high-level lawyers -- three from international law firm Heenan Blaikie, including Plant.

When Plant served as attorney general of B.C. he presided over the cuts to legal aid that created this access problem.

"He was part of a government that had a particular ideology about legal aid, and certainly he was identified as a bit of a figurehead for those cuts," says Jessie Hadley, co-chair of the Canadian Bar Association B.C. Branch's (CBABC) Poverty Law Section.

"It seemed like an unfortunate piece of optics, especially since the students that are studying now may not be familiar with what happened 11 years ago and may not appreciate his association with the cuts."

Beginning in 2002 the provincial government cut funding to the Legal Services Society by 40 per cent. The effects on justice accessibility in the province were substantial: 85 per cent of legal aid offices closed, and 75 per cent of employees lost their jobs. Even the legal areas that qualified for representation were reduced.

"Prior to the cuts, legal aid used to fund representation for a variety of family law problems, but now family law representation is only available if a person has a very serious issue that has to do with a threat of violence or a child being apprehended," Hadley told The Tyee.

Since that time further cuts in staffing in the Lower Mainland, as well as the elimination of the LAWline legal hotline and cuts to family law services have reduced access to justice even further.

"Until Aug. 2002 legal aid operated a province-wide network of 43 local offices that helped people with family and criminal law issues, and also with poverty law issues affecting their housing and their basic income security. Those clinics are just gone now."

When the initial cuts to Legal Services were announced, they were so controversial that in 2002 a majority of BC Law Society members voted to censure Plant, who served as attorney general from 2001 to 2005.

At the time, the CBC reported Plant was "confident that despite the cuts, any one who needs legal help in this province can get it."

Yet the UBC Law School calendar course description for Access to Justice (page 88) notes "the justice system has become increasingly unaffordable and inaccessible for many Canadians. Demands for more resources for judges, legal aid, etc. are becoming louder and more urgent. Government budgets are severely constrained."

Students enrolled in Access to Justice should expect to address questions like the "what is a lawyer’s ethical duty to serve the cause of justice? How accessible is our justice system? What roles do the judiciary, the law firm, the law student, and governments play?"

Plant is currently in Alberta representing the province at the Enbridge Northern Gateway hearings. The Tyee contacted Plant's office for an interview but was informed by his assistant that he would be out of cell phone and email range until past our deadline.

'We don't even know the format': BC Law Society

Hadley is also concerned by the evaluation method for the course. According to the course description, 70 per cent of the course will be based on a group project presented to the BC Law Society.

In a letter addressed to Law School dean Mary Anne Bobinski expressing the CBABC's Poverty Law Section concerns with the course, Hadley writes "If the intention is to have the students assist with developing for the Law Society an analysis of access to justice issues in B.C., it is especially important that students be presented with a balanced range of perspectives."

Art Vertileib, first vice-president and future president of the BC Law Society, is the only instructor for the course that does not work at Heenan Blaikie. He was also the senior commission council for the Missing Women's Commission of Inquiry, which was criticized for the provincial government's refusal to fund legal representation for organizations representing marginalized women.

The Tyee contacted the Law Society for an interview with Vertlieb but was told it couldn't happen by press time.

Bruce LeRose, current president of the BC Law Society, did speak to The Tyee and says even he doesn't know what the final evaluation will look like.

"We don't even know the format or how that's going to take place."

But that doesn't mean the Law Society isn't excited about their involvement in the course: "We are absolutely committed to investigating and creating options available to the public that will allow for more affordability and more accessibility to legal services," says LeRose.

"If we can succeed in assisting students while at the same time creating discussion about options available to improve access to legal services and justice, then it's something that certainly falls within our mandate to facilitate."

Hadley's letter to the dean included suggestions for improving the course, such as offering to arrange for lawyers who work with low-income clients, or people who have needed legal aid in the past, to address the class.

Bobinski, who was out of the office on family matters and therefore could not speak to The Tyee, returned Hadley's letter assuring her this was not the only social justice course the law school offers.

The Law School provided The Tyee a copy of the letter, which outlines other social justice avenues students can take through the school including a Social Justice Specialization for law students, which involves taking courses from at least two social justice course clusters, including Aboriginal Law, Economic Inequality, Gender and Sexuality, and Human Rights.

"I am confident, then, that over their three years in the [Juris Doctor] program law students will be exposed to a variety of perspectives relating to issues which have a bearing on access to justice," Bobinski's letter reads. "I have no reason to doubt that the tools of critical analysis which our students will bring to this class will be welcomed by the instructors."

Bobinski went on to say sharing Hadley's letter with instructors would intervene in the course's development and infringe on academic freedom. She did note, however, that there was nothing stopping Hadley or the Poverty Law Section from approaching the instructors directly.

Hadley says she understands the dean's refusal to speak to the professors. But instead of giving up there, she is encouraged to propose a different course on justice accessibility to UBC.

"I think it would be very interesting to try and put together a course proposal that does incorporate some of the voices that we were talking about," she says.

"I don't know if the law school would choose to put it on, but I'm hopeful that they'd consider it."

As for the course in question, Hadley says she's glad the letter has brought this issue into the limelight and hopes the professors will get to read it since it has been made public. She says it isn't about a personal attack on Plant since, after all, there was an entire government behind those cuts.

"Mr. Plant is probably really well positioned to comment on a lot of this stuff, being [the former] attorney general. He probably has a lot of interesting perspectives. We don't object to those being discussed at all in a course on access to justice, it's just that it seemed quite unbalanced," she says.