A year back, Alexis Hinde decided to try an experiment: she ditched her private vehicle and switched to a car sharing group. Since then, she said she's sharply cut back the time she drives. 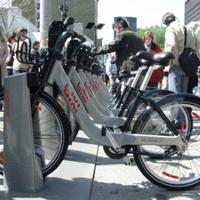 Rise of the Communal Bike and Car

"It used to be if it was raining I would take my son eight blocks to daycare in the car, because it's easy to be lazy about that sort of thing. Whereas now if it means having to reserve a car and the expense of that and everything else, I'll just walk with [my son] to daycare or get on the bike and take him," she said.

It's a lifestyle switch that appears to be growing in popularity, as vehicles stenciled with car share company logos become a common sight on Vancouver's streets. Though each company is different, car shares offer a variety of rental vehicles, often by the hour, and they spare customers the expense of paying directly for maintenance and insurance. After use, share members can drop off vehicles curbside and just walk away. It's the convenience and potential savings that drew Hinde in.

Of the three car share groups in Metro Vancouver, Modo is now at 9,000 members, up from roughly 7,000 in 2010, and over the last five years, Zipcar has expanded "steadily" to more than 11,000 Vancouver members, according to Business In Vancouver. Car2go has experienced significant growth since setting up shop last year, reporting that 15,000 members have now signed up to drive the company's small fleet of Smart cars.

And now there's evidence that growth is starting to achieve what proponents claimed it would. Vancouverites are shedding their private vehicles, reducing their drive times, and lowering their impact on the environment.

Hinde, a West End Vancouver resident, works as a writer and part-time administrator for a software company. She has a small business designing, manufacturing and selling clothes for young boys.

Switching to a car share vehicle has definitely changed how she drives, she said. She still has her husband's car for weekend use. But after selling off her Toyota Echo hatchback and joining Zipcar, Hinde has reduced her weekday drive time from three or four days a week to "maybe three times in two months" -- mostly to do errands that require a vehicle, like taking her 87-year-old mother-in-law grocery shopping.

Lisa Corriveau agreed that joining a car share made her more cautious about the amount she drives. A Mount Pleasant writer and stilt performer, she's blogged positively on her car sharing experience.

Having to lug a car seat for her son three blocks each time she wants to use a vehicle has reduced the amount she uses a share. But she said she doesn't regret her choice to forgo buying a private car and instead sign up with Modo (then the Car Co-op) in 2003.

"I couldn't have gotten a nice car for $500," she said, noting both she and her husband work downtown. "Parking would have been $150 a month; it just would've been insane."

"I would rather invest that money or spend it on bikes instead," she said.

Intrigued by the prospect of sharing a car, but want more details?

The Tyee recommends this fantastic service story by John Burns at Vancouver Magazine, published May 2012.

It has details on Modo, Zipcar and Car2go, including joining and per hour cost, potential "speed bumps," and other benefits.

Because of car sharing, she's changed how she plans car trips. She now stacks up errands to minimize costs.

"I try to be very efficient when I use the car. I don't book it for longer than I need to. I combine a trip to somebody's house with an errand in that area," she said. "I definitely use cars less than if I had one sitting in front of my house. You know what it's going to cost per use instead of always paying that all the time."

"There could be one or two cities in North America where you have three [car shares] in operation and they're all doing well," said Bernice Paul, Modo's marketing director. Formerly known as the Car Co-op, the non-for-profit group pioneered car sharing in the city since it started about 15 years ago.

Paul said many Modo members were driven by green motivations to start car sharing. But often, she added, "people are joining for more the smart reason that they know they don't need to own a car. It's not necessarily the green choice; it's the economical choice."

Paul's noticed a shift in the business over the last couple years. Customers have become less concerned about securing transportation, and more interested in lifestyle and sharing resources.

"The last year and the half, 50 per cent of new members joining are between the age of 25 and 35. They're choosing to live around cities and city centres, and big transit hubs in Surrey and New Westminster -- that's where we've seen a lot of growth," she said.

Transport hubs are appealing for new members because they provide easy access to amenities and grocery shopping, she said, adding people can just step off the SkyTrain and hop directly into a Modo car share vehicle, which are stationed at several stops along the Expo Line.

Those sorts of city layouts make "it easy to get places -- to get to work or their friends' houses," she said. "You see similar setups now in municipalities all around Vancouver. They're really encouraging that lifestyle because it makes better use of the land and shared spaces."

And as a result of those policies, it's been easier for residents to give up their privately owned vehicles and use car shares to be part of a mixed urban lifestyle involving walking, cycling and using mass transit, she said.

From annual surveys, "we generally know about half of our members generally give up one vehicle when they join Modo," she said. "They scrap a car, don't join a lease, or they don't purchase a vehicle."

She said depending on the city you're talking about, a single car share vehicle can take between four and 30 private cars off the road. That reduces pollution, and ensures new cars -- and all the energy and steel used in their production -- don’t sit unused in garages or parking spaces for most of the day, according to a 2010 study sponsored by the U.S. federal and California State Departments of Transportation.

The study, which surveyed 6,281 respondents in the U.S. and Canada, found that car shares on the whole reduced a household's average greenhouse gas emissions by upwards of 0.84 tonnes per year. (By comparison, the average British Columbian emits 14 tonnes of carbon dioxide every year, according to 2007 Environment Canada statistics.)

Ahead of the pack

Vancouver, in that regard, could be a model for how to encourage successful car shares.

The City has been proactive in supporting shares, partnering with Modo as part of its 2009 plan to green staff commutes. The City has since managed to get 585 staff members signed up with Modo and has cut 20 passenger cars from its fleet of staff vehicles, said Alex Russell, a spokesperson for the City.

"There's quite a few things we try to do to support car shares because it's been so successful in the last few years," she said, adding that the City is considering making the inclusion of car shares mandatory for new transport hubs as part of Vancouver's 2040 Transportation Roadmap.

"Most cities are a little bit hesitant. But Vancouver is certainly at the forefront when it comes to this. I think Vancouver is a perfect example of a city that's done all the right things from the transit infrastructure perspective," said Mark Pribula, GM for Zipcar's Vancouver branch. The company has over 700,000 members worldwide, with cars in cities across North America and Europe.

"I look at the horizon and everything looks extremely positive," he said, noting the Vancouver market is still far from saturated.

"We're at such a low adoption overall -- still at such an infant stage. We see as a company urban centres where more than half of the people will be car sharers," he said.

The market share of car sharing organizations remains small in North America. Encompassing only 0.2 per cent of the United States' urban population, for example, the groups have a lot of room to grow, according to a 2010 DePaul University study.

Yet whether the business continues to expand and meet its environmental goals depends on sound city policy and planning, added Pribula.

"We don't want people giving up their personally owned cars and driving car sharing vehicles five times a week, because that becomes a bit of a moot point."