If the British Columbia government moves forward on major forestry changes that were floated in a cabinet document leaked last week, it will be with support from the main union representing workers in the sector. 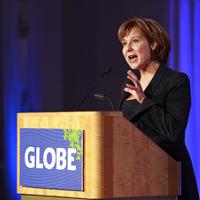 And that may be putting the opposition New Democrats in a political squeeze, given that the union is one of the party's big financial backers.

The leaked cabinet document proposed various ways to free up more timber for milling, included logging at an unsustainable rate, cutting down more old growth and wildlife habitat, and allowing cabinet to make decisions instead of the chief forester. In an April 19 interview with The Tyee, a high-ranking Steelworkers official made it clear his union is supportive of finding more timber in the short term but also wants the forests better managed for the long term.

The immediate issue addressed in the April 7, 2012 cabinet submission was finding enough timber supply for Hampton Affiliates Ltd. to justify rebuilding the Babine Forest Products sawmill in Burns Lake, which burned down after a January explosion.

The options under consideration would undo some 20 years of land use planning and place more emphasis on short-term economic goals than on long-term forest health, and observers say whatever is done will set precedents for other areas where the forest industry is struggling.

Premier Christy Clark said that while the leaked document is not exactly what made it to cabinet, it does raise options cabinet is discussing and that the public needs to consider. "It does discuss many of the things that are under discussion in the community," she said in the legislature.

The government has been having that discussion with various stakeholders, including the United Steelworkers Union, she said.

The Steelworkers have had discussions recently with the government about both raw log exports and the situation in Burns Lake, said Bob Matters, the chair of the union's wood council.

The discussion regarding Burns Lake hasn't gotten into specifics, but the union agrees in principle with the direction set out in the leaked cabinet submission, he said.

The union is supportive of logging areas that were protected to maintain landscape views, he said. The cabinet submission raises the possibility, noting there would likely be opposition from the tourism industry.

"Visual corridors are simply that, just visuals," said Matters, noting they have nothing to do with sustainability or forest health.

The submission also discussed logging areas that had been kept to protect old growth and wildlife habitat. "Obviously there are constraints put in place in different regions for different reasons," said Matters. "I'm very, very concerned about the elimination of certain provisions, but I understand why we could relax certain provisions."

The issues and decisions will vary from community to community, and it may be acceptable in some places to relax the restrictions around logging old growth, starting with Burns Lake, he said.

Linkages needed between logging and mills

The Steelworkers also support proposals like increased silviculture that would build the industry for the future, Matters said. "That is obviously a good move."

Everyone has known for a long time that increased logging to stay ahead of the mountain pine beetle kill was going to lead to a reduction eventually, he said. Planting more trees and caring for them is the key to recovery, he said. "It makes sense long term."

While there is a short-term need to find fibre to get people back to work or keep them working, he said, "We are fully supportive of having sustainable forestry that does not jeopardize the future of the province and its resources."

The union would also go a step further than what the government so far has been willing to discuss. When the government talks about freeing up fibre, there need to be clear linkages to keeping local mills running, he said. To increase the cut without those linkages, he said, "That's nonsense."

In the past logging on Crown land was tied to local mills under what were known as "appurtenancy" clauses, a practice ended by the government in 2003. Asked if that's what he meant, Matters said, "I'm clearly not trying to say that word, only because when you use that word this government gets stupid."

He added, "If the linkage is there, whether they use the word 'appurtenancy' or not, as long as there's fibre for those mills, that's a win-win for everybody."

While the Steelworkers are talking with the government about Burns Lake, the union is a large financial backer of the opposition NDP. Elections BC records show that since 2005, through various committees and locals, the union has given in the order of $385,000 to support the NDP and its candidates.

The NDP has been much too restrained in its criticism of the government's approach on finding fibre for a new mill in Burns Lake, said Bob Simpson, an independent MLA who was pushed out of the NDP in 2010 after criticizing Carole James' leadership.

"On the Burns Lake situation I think the NDP's jammed on two fronts," said Simpson.

First, James went on record very soon after the fire at the Babine mill saying the government should find logs so it could be rebuilt.

Second, like the Steelworkers, they've been advocating for a reinstated jobs protection commissioner. "It's very hard for them to criticize the government for going to extreme measures to protect jobs in Burns Lake or protect jobs through the rest of the province when the only thing they're offering as a solution to the forestry crisis is jobs protection," Simpson said.

Last week the NDP led a question period with Leader Adrian Dix and Forestry critic Norm Macdonald asking about the cabinet submission they and others had been leaked. In his response, Jobs, Tourism and Innovation Minister Pat Bell thanked the NDP for providing him with the document ahead of question period.

"Somebody has to question why the NDP gave the leaked document to the government before they went into question period," said Simpson, who also had a copy and was set to ask questions.

Asked for his own explanation, he said, "Right now the NDP is avoiding asking any real questions in the legislature because it means Adrian gets scrummed when he comes out and gets asked the question, 'What would you do?' And as a government in waiting... the more you'll get the NDP avoiding the real questions."

Even Dix's question about cabinet taking away the chief forester's decision-making power in the area and replacing it with cabinet was muted, he said. "That should be a 'what the fu**?'"

The issue is serious: NDP's Macdonald

Asked about sidelining the chief forester, Forestry critic Macdonald said, "I think pretty well anyone would be uncomfortable with that. You have a chief forester for a reason." He also said the focus has to stay on sustainability. "You have to have that," he said.

He also said the NDP would reinstate a jobs protection commissioner, look for better ways to use the resource and spend $100 million on reforestation and other forest health initiatives.

"It is unusual," said Macdonald when asked about the NDP tipping the government off on what was coming in question period. "We wanted to actually talk about the context. It's such a serious issue. It's not a gotcha moment."

He compared it to the recent agreement between the Opposition and the government to make a joint statement to the federal government on the Aveos workers. Another example would be the joint approach on the federal shipbuilding contracts not long after Clark became premier.

Macdonald said the NDP could criticize the Liberals' mismanagement of forestry over the past decade, but that doesn't help forest-dependent communities. "Whether it's a BC Liberal government or an NDP government, we have to figure out what's going to happen for workers and the community going forward," he said. "We have obligations for the present and the future."

Macdonald said the NDP is waiting to see what the government is actually considering before weighing in heavily on the leaked cabinet submission, though Clark has said the document does reflect the discussion that's happening.

"They said they were looking at a number of things," he said. "We are trying to be as open-minded as possible... We don't want to speculate."

Clark and the government need to get the public involved in a discussion and lay out what options they are seriously considering, Macdonald said. "What did come to cabinet? What set of things are on the table?"

Macdonald said, as Dix did in a recent interview, that the NDP would be unlikely to return to an appurtenancy system like what the Steelworkers are seeking. The industry has changed a lot and it would be complicated to go back, he said.

The NDP, the government and the union are all working towards the same goal, he said. Everyone wants community stability and people working in the forest industry, he said.

The NDP, said Simpson, needs to understand the timber supply problem is not just in Burns Lake but throughout the province. "All of these chickens will come home to roost right after they take power," he said. "All these communities are going to start to come apart, mill closures, lack of logs, all that stuff when they're in the driver's seat, and I can't for the life of me figure out how restoring a jobs protection commissioner is a solution to the real issues we've got here."

"To the NDP, the message is 'this is going to be your nightmare,'" he said.