"It's time to get down to work and defeat the BC Liberals," Dix said in his acceptance speech before being joined onstage by the MLAs in the opposition caucus.

The victory is seen as a move to the left for the party.

"We are not going to win the next election by sidling up to the Liberal Party and just showing up," Dix had said earlier in the afternoon in his speech to the convention ahead of the voting. He argued, as he had on the campaign trail, that a clear, strong platform will motivate likely NDP supporters to vote.

It also means that an NDP government will have a mandate to enact an agenda of change, he said.

In his victory speech, Dix thanked his competitors and attacked Premier Christy Clark's record, pointing out she closed 120 schools as education minister.

"It was a great win for our team," Dix said in an interview. Campaign workers and volunteers put in long hours to make it happen, he said. "It's a huge tribute to them."

Farnworth and Horgan were strong opponents, he said. "I wasn't surprised by how well John and Mike did. They ran great campaigns."

And he was, of course, happy about the result. "I'm very appreciative that the party chose me as their leader," he said.

Asked about speculation that his victory might be bad news for the 13 dissidents who opposed Carole James' leadership and forced her December resignation, none of whom endorsed Dix, he said, "Every day I've run my campaign in an incredibly positive way. I respect every member of the caucus, every one of them will play a role on my team."

And asked if he might not sign nomination papers to allow the dissidents to run as NDP candidates, he said nominations are the responsibility of local constituency associations and he would respect those decisions. "Of course I will," he said. "There will be no issue about signing nomination papers."

The party is united moving forward, said West Kootenay Boundary MLA Katrine Conroy who resigned as party whip in the fall due to disagreements with James' leadership.

"It was very close," she said. "I think today showed that the party was ready for change. Here we are and we've got a new leader and we're going to move forward." 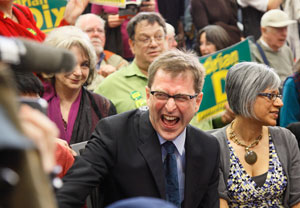 All the incumbent MLAs are ready to work hard and the party is revitalized, she said. "I think we've got some real good energy happening."

"Adrian's one of the smartest guys I know," said Nicholas Simons, the Powell River MLA. Simons was in the group that opposed James.

He ran for the leadership himself, but withdrew and gave his support to Horgan. After Horgan was dropped from the ballot, Simons put on a Farnworth button.

"The party's turned the corner and the view looks good," he said. "I'm looking forward to working again with Adrian. We did a lot of work on the child welfare file, and we've got a lot of other files to work on together."

He added, "The party's energized. I hope I had something to do with that."

"He will have my support," said Farnworth. "We're entering a new chapter. Adrian's the leader and I know we're going to do really well." 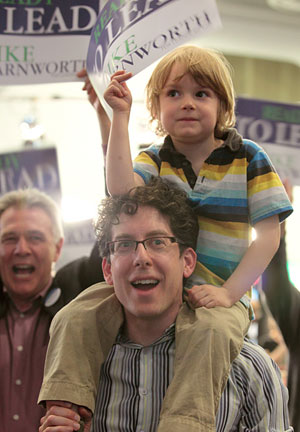 He noted that he and Dix had worked closely together for six years as house leader and deputy house leader.

"I'm going to be working to make sure Adrian becomes the next premier of British Columbia," he said. "We leave here tonight united. We have a caucus and a party that want to win the next election."

Horgan, who was the best man at Dix's wedding, declined to say who he voted for in the final round, allowing that it was, "None of your damn business."

Dix won thanks to hard work, he said. "Adrian worked very hard and he got more votes than Mike, that's why he won," Horgan said. "That's been his trademark for the 25 years I've known him. Nobody works harder than Adrian Dix."

Horgan said his own campaign was hampered by a late start, putting him at a disadvantage to competitors who did a better job signing up members. "If I'd started earlier I'd have had a different result, I think," he said.

Otherwise, he said he had no regrets. "We were positive, we didn't sling any mud, there were no personality issues, it was all about policy and approach. I think we should all be holding our heads up high, I know I am."

"My BC Liberal colleagues and I look forward to contrasting his approach to public policy with that of Premier Christy Clark" Penner said. "I hope Mr. Dix will show more willingness in the future to move beyond the failed NDP policies of the past, than he did during the three-month leadership campaign when he didn't articulate a single new idea."

Bill Tieleman, who worked with Dix in the NDP governments of the 1990s and who endorsed him, said he was pleased with the outcome. 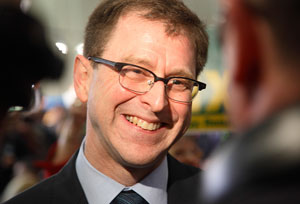 "I think the delegates have decided the party needs to take a different approach than was taken in 2005 and 2009 and in between," he said. "You have to mobilize your base."

That means putting forward policies that speak to renters, tenants, poor people, immigrant farmers, and others who should be natural NDP supporters, he said.

"The NDP has been in the middle of the road and has not won an election [since 1996]," he said. "The reality is people didn't want to stay in the middle anymore."