Hemmed in by Delta to the east, Point Roberts to the south and the Salish Sea to the west, Southlands is a 538-acre British Columbia farm that has been in the middle of a tug-of-war between developers and farmland defenders for nearly four decades.

The president of the development company that owns Southlands has proposed a plan that he says could serve both interests equally. Proponents argue that it could serve as a model for a new form of planning -- agricultural urbanism -- where people and farms can co-exist. Opponents fear it will only drive up the prices of already expensive, and scarce, farmland in the region.

The first attempt to develop the Southlands property was in the early 1970s, when its previous owner, George Spetifore, unsuccessfully proposed a 3,500 home development on the property.

When the agricultural land reserve (ALR) was brought into existence a couple of years later, the farm became a part of the reserve, only to be controversially removed from the ALR in 1981. Another proposal for development on the property was defeated by a public outcry in 1989. The Century Group acquired the property shortly after when the landowner defaulted on their mortgage. In 2006, Century Group President Sean Hodgins proposed a new vision for the land that he hoped would serve the interest of the overall community.

"Seeing some farming happen, and not happen, on the property over the years, it was clear that there was some element of farming that could happen in the future," says Hodgins.

The plan that was eventually proposed would see one-third of the site developed for housing, one-third for community amenities including parkland and one-third for agriculture. "I was trying to cross the bridge, if you will, between our aspirations to develop something, without paving it over, and recognizing the stated community desire of 'Well, we don't want to lose farming in the equation here.'"

Despite Hodgins’s stated intent, opponents to the plan suggest that if the project were to go ahead that it would make farmland scarcer and less affordable for farmers. "Farmland is already expensive because of speculation that land might be removed from the ALR," says Harold Steves, founding director of the Farmland Defence League. "If the concept of developing one third of our farmland caught, prices would go up and no farmland would be safe." For the proposal to go ahead the Century Group needed an amendment to Delta's official community plan to change the zoning of the property from agricultural to mixed use. That request was denied, and the project stalled.

Since the Agricultural Land Reserve was established in 1972, 18 per cent of ALR lands in the Lower Mainland have been removed for development -- and as the population grows, pressure to develop further remains a constant threat. Solution? Like the public purchase of the remaining Terra Nova lands, Harold Steves proposes that one way to preserve farmland is to establish a farmland trust. Land in the trust will be set-aside in perpetuity as agricultural land, unlike ALR lands which can be removed. Steves says the trust would be financed by a levy on highway and port development that has already destroyed farmland, development cost charges on urban growth and private bequests and donations. To further enhance the trust Steves says that for every acre taken out of the ALR two acres should be returned. Surrey already requires developers to meet this requirement.

"We need to break the dialogue up between build, don't build," says Janine de la Salle, who worked as a planner on the project with mission-driven planning firm HB Lanarc. "The Southlands was the first kind of innovation and foray into that in-between dialogue. It was an experiment into how we could actually invest in agriculture through development capital."

Recently awarded the Young Planner of the year award by the Canadian Institute of Planners de la Salle has made it her raison d'etre to find innovative ways to incorporate food systems into all levels of planning. She, along with HB Lanarc senior planner Mark Holland, coined the phrase agricultural urbanism to define their food system work and published a book of the same name.

Citing influences ranging from permaculture guru Bill Mollison, writer Michael Pollan and philospher/farmer Wendell Berry to Bill Rees, Short History of Progress author Ronald Wright and Herb Barbolet, the grandfather of Vancouver's food security movement, it's clear that de la Salle and Holland are viewing the issues of our local food system with a wide and deep lens. Written as a "handbook for building sustainable food and agriculture systems in 21st century cities" Agricultural Urbanism was their response to the flood of books on alternative food systems that offered a snapshot of the burgeoning populist movement, but were short on suggestions for how to proceed. "It's about looking for new solutions because we're at a point where we need them," says de la Salle.

The short definition of what Agricultural Urbanism is about is "a way of building a place around food." Going deeper, the concept is meant to integrate everything from food access, the food economy, infrastructure needs, education, wildlife habitat, place-making (making food visible in the community), policy and how food systems can contribute to climate change solutions.

After WWII and the rapid auto-centric development of North American cities, food was treated like any other commodity and many parts of the food system were centralized and consolidated to take advantage of economies of scale. There was uninterrupted abundance at the supermarket so nobody questioned the system. Agriculture and processing were dealt with by zoning, which was changed at the whims of elected officials and, presumably, the public will.

"There used to be beef cattle, cabbage growers, all kinds of things," says Arzeena Hamir.

Amid a chorus of birds, the crunch of frozen ground and a schizophrenic wind chime battered by an aggressive wind, the Richmond Food Security Society co-ordinator explains the history of the surrounding area and how the 63-acre Terra Nova Rural Park was established with an eastern boundary lined by the backyards of two-dozen monster homes. 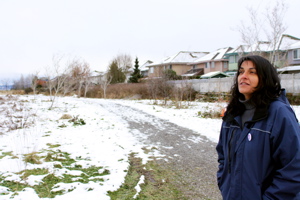 Arzeena Hamir, coordinator of the Richmond Food Security Society, contemplates the challenges of keeping farmland from being paved over for housing development in Richmond, B.C.. Photo: Justin Langille.

When the owners of the Terra Nova lands applied to remove the property from the reserve, Richmond city council voted 5-4 in favor of the removal, but the agricultural land commission disagreed. The B.C. provincial government ignored the commission's ruling and removed it at the cabinet level. Public dissatisfaction with these backroom political dealings cost four of the five Richmond city councilors their jobs when the next civic election rolled around, but not before a good chunk of the neighbourhood was already built, paving over some of Richmond’s most fertile farmland.

"It's one of those neighbourhoods where the houses all look the same," says Hamir. The uniformity doesn't come cheap either. The MLS listings for the three houses closest to the park average a cool $1.5 million. But, in a round-about way it's the existence of this neighbourhood of 3000 square foot homes that made Terra Nova Rural Park possible.

"We stopped the development from going any further," says Harold Steves, who was on Richmond city council at the time. The city held a public referendum to spend $29 million to buy the remaining land with public money. Richmond residents responded with a strong majority favoring the plan and Terra Nova Rural Park was born.

Despite a thin blanket of snow and the unfriendly wind it's easy to see the concepts of agricultural urbanism on display at Terra Nova Rural Park in Richmond. The 99-plot community garden is the biggest in Richmond. A sharing garden provides much needed fresh produce to the Richmond Food Bank and other service providers, the farm centre houses a community kitchen and students from local schools tend plots during less frigid weather.

Activity on the property is also tied to a bigger effort of urban growing in the city. "We know there's at least 100 acres in the city," says Hamir of land that has been inventoried for farming. Her hope is that these acres will be actively farmed and the food will be sold in the community. In agricultural urbanism jargon, Terra Nova will act as a hub, supporting the larger efforts in the community.

The example of Terra Nova can be both celebrated and lamented. Celebrated for their current success and innovation, but lamented because so much land was lost before the public outcry was heeded. The danger now in the Southlands is that future circumstances will allow a less scrupulous development than Hodgins’s (which at least has a vision of community benefit) to take place and the entire piece of property will be lost under pavement. But this is a chance that the farmland defenders are willing to take, believing that any further paving of farmland is unconscionable. In the short-term, plans for the Southlands look to be exactly what Steves, Hamir and their colleagues had hoped for.

"We don't have any definite plans," says Hodgins. "We will try to farm it, that's what we'll try to do."