It's time to look past the grisly spectacle of Postmedia's death spiral and talk about what comes next. 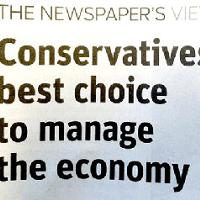 The corporation chopped 90 editorial jobs Tuesday, about eight per cent of its journalists. It centralized sports coverage and merged previously competing newsrooms in four cities. In Ottawa, Edmonton and Calgary, the tabloid Suns and Postmedia's broadsheets will share newsrooms. In Vancouver, the Sun and Province will merge newsrooms.

The cuts are yet another confirmation that Postmedia's newspapers are doomed and the corporation's owners and managers are focused on wringing the last cash from the operation before the doors close.

Postmedia, from its first days in 2011, has been in a downward spiral. Revenues have fallen every quarter, and the corporation has responded by cutting expenses. That resulted in lower quality products and poorer service for advertisers. So revenues fell more, and more cuts followed.

No end is in sight. Postmedia released its quarterly results last week and advertising revenues were down almost 18 per cent on the previous year. (Excluding the results of the newly acquired Quebecor newspapers acquired last year.)

There has been no good news since Postmedia acquired the former Canwest newspapers from the crumbling Asper empire in 2010. Advertising revenues have fallen by 57 per cent since the same quarter five years ago. Overall revenues are down 45 per cent, and even digital revenues have fallen. (The comparison isn't exact; Postmedia has sold some papers since 2010, including the Victoria Times Colonist. But the plunge is dramatic.)

Last week, RBC Dominion set a target price for Postmedia stock of zero, citing fears it wouldn't be able to make debt payments next year. Investment houses are pathologically optimistic; when they say a stock will soon be worthless, it is a very bad sign.

The corporation's major owners are the U.S. hedge funds that loaned the money for the purchase of Canwest's newspapers, who have decided to extract the last value from the newspapers. (Canadian tax laws are supposed to discourage foreign media ownership. Business owners can claim the cost of ads in Canadian-owned publications as an expense, but not the cost of ads in foreign publications. To get around the laws, Postmedia created two classes of shares. Class B shares, foreign-owned, represent about 97 per cent of the stock, but are limited to 49.9 per cent of the votes in any matters to be decided by shareholders.)

The Postmedia axe hasn't finished swinging. The layoffs this week will likely result in annualized savings of about $10 million. (Assuming each journalist represents about $110,000 in salary and benefits.)

But just last week, CEO Paul Godfrey announced the corporation would cut $48 million in expenses in the next 13 months. There are many more cuts to come.

No white knights on horizon

For readers, this week's cuts mean poorer quality newspapers. Postmedia plans to have reporters file a single story, and then editors will create versions for the two newspapers. Short and snappy for the Province, longer for the Sun, for example. It's not real competition, and fewer people will be available to cover the news.

There are no easy answers for newspapers' woes. Readers have been drifting away for at least 25 years, the Internet has become a great source of free news and advertisers have better, cheaper options. But Postmedia has shown a remarkable inability to respond with anything other than cuts.

No one is going to ride to the rescue. The Competition Bureau approved Postmedia's purchase of the Quebecor properties. It sees few issues with consolidation, in part because newspapers are no longer dominant in news or advertising. Readers and businesses have many options.

And no white knights are going to swoop in and buy the newspapers. Businesses that are shedding revenue and customers year after year are not attractive to investors, even without Postmedia's big debt burden.

So we should be talking about what happens next.

For all the criticism of Postmedia, its newspapers have the largest number of working journalists in every city in which they operate. They reach more readers than other print and digital media. They play a role in providing information and building a sense of shared community. Even in their diminished circumstances, they can do reporting and commentary that holds the powerful to account and builds a broad, shared understanding of issues.

We need to talk about how we will replace those roles -- and ideally fulfill them more effectively -- when the daily newspapers are gone.

What models will provide the money to pay journalists to write about school boards or policing or municipal or provincial governments? Who will put up the money (and what will they expect in return)? How can these media reach a broad audience and not just special interests?

We're facing a great loss of resources devoted to reporting and commentary, one that has real implications for our democracy. We would be foolish to just shrug, or talk about market forces.

We need a public discussion about life after newspapers.