Currently, the top three fiction bestsellers are the three volumes of the Fifty Shades trilogy by EL James. The story, set in the Pacific Northwest, is the romance between a shy, virginal college student and a charismatic corporate CEO who struggles with his desire to sexually dominate her. 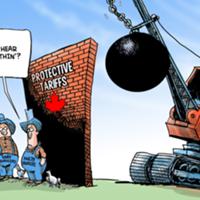 If this sounds a little like vampire romance bestseller Twilight by Stephanie Meyer, that's not coincidental. The Fifty Shades trilogy was originally a work of Twilight fan fiction called Master of the Universe. In this variant, Bella and Edward are transposed into a different world, with vampirism replaced by consensual sadomasochism. James posted it on several different websites under the alias "Icequeens Snowdragon."

In 2011, James published a modified version of Master of the Universe, with the character names changed and other rewrites, as the Fifty Shades trilogy. The books were a surprise hit, dominating the sales charts and with talk of a film adaptation. Regardless of the trilogy's literary merits, it is remarkable that a work of fanfiction, slightly modified to avoid copyright infringement, became a bestseller.

For decades, since the days when fans distributed mimeographed copies of type-written stories set in the Star Trek and Blake's 7 universes, there's been a de facto understanding that, so long as these derivative works were created and distributed for free, authors and publishers would at least tolerate them, instead of taking legal measures against copyright infringement.

A new international trade agreement could change that. A leaked copy of the intellectual property chapter of the Trans-Pacific Partnership, which Prime Minister Stephen Harper recently announced Canada would participate in drafting, criminalizes copyright infringement not only by the creator but also the distributor, even if the distributor is unaware. Not only would EL James be liable for posting her fan work, so would any website that hosted it.

Openmedia.ca has launched a new campaign called Stop the Trap, dedicated to mobilizing citizens and businesses to amend or remove the intellectual property chapter of the Trans-Pacific Partnership.

'A whole cycle of threat'

Apart from lengthening copyright terms and imposing criminal penalties for breaking digital locks (even for benign purposes like visually impaired people using the read-aloud function on their e-readers), the TPP disregards exceptions of copyright for fair use or non-commercial use.

"One of the TPP's many vices is that it doesn't really distinguish between different ways that people can use content, and different levels of infringement, of non-commercial versus commercial, for example. It imposes very strict penalties on anybody regardless of what their use is, whether that would constitute fair use in the average market or whether that would actually be an infringement on creator's rights," says Lindsey Pinto, communications manager for Openmedia.ca

Fanfiction.net and other sites that host fan fiction stories could shut down. Youtube, Vimeo and other video hosting sites could be forced to police their users and not only remove infringing content like fan-made music videos, but to hand over their users' personal information to big media companies for civil and even criminal charges.

"We're talking about possibly fines, possibly being dragged into court," says Pinto. "The threat of litigation is quite high and though we don't have the finalized versions of the TPP, one of its many fun vices is that we don't actually know what's going to end up in it in the end, because stakeholders and citizens are left out of the process."

The provision that Internet service providers and other companies could be liable for hosting infringing material creates a situation in which companies must police their users at the behest of media companies.

"They [ISPs] would be under threat, we would be under threat. It's a whole cycle of threat, where they have to hand over your information, likely and more often than not without appropriate privacy safeguards, to big media companies. They would be forced to spy on your activities because they might be sued if they don't. It's one of those McCarthy-esque [situations]. If you don't rat out communists, you are a communist. And then you become the person big media goes after, instead of your ISP, which becomes this cycle of blame and scary legal procedures for what generally could be considered normal use of the Internet," explains Pinto.

After years of lobbying, Prime Minister Harper announced on June 19 that Canada would participate in TPP negotiations, with what Scott Sinclair, senior trade policy researcher at the Canadian Centre for Policy Alternatives, described as "unprecedented and humiliating restrictions."

Because Canada is a late-joiner to the negotiations, it has a limited ability to influence them. "Canada's in the embarrassing situation where we have to sign on to previously agreed-upon sections of the Trans-Pacific Partnership without having read them," says Pinto.

Consequently, Openmedia.ca has launched an international campaign to get people in countries that are first-tier negotiators to influence their governments and get the agreement changed or removed. "What we do want to do is encourage all the countries involved in the Trans-Pacific Partnership agreement, regardless of whether Canada's in there, to take out the intellectual property chapter or to revise it so it is more in line with global standards of legal use," says Pinto.

Openmedia.ca is also negotiating with Internet service providers and software companies to get their support for stopping the TPP, and have already recruited Internet company Tucows.com.

Pinto also asks the public for support via petitions. "At Openmedia.ca, we're a four-person staff and we rely on supporters who are educated and informed and creative and who spread the word to run our campaign successfully and to get people on board and to find different ways of communicating issues."

The next round of Trans-Pacific Partnership talks start up in San Diego from June 2 to June 10.