"This is not an imaginary story." 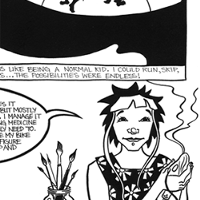 Girls Who Bite, Draw and Fly

When I was a kid, this phrase meant serious business.

This was the comic book equivalent of a sitcom's "very special episode" -- the unfunny episodes where they'd unplug the laughtrack and a character you'd never seen before and would never see again showed up to learn a hard lesson about the evils of drugs, anorexia, alcohol or something else that might get the star nominated for an Emmy.

When DC comic creators wanted to tell a story that had nothing to do with canon -- the collected history of a superhero's origin and adventures that accompanies and analyzes heroes like Talmudic scholars kibbutz about the Torah -- they'd bring in Bat Mite or Mr. Mxyzpytlk (a name I can sadly spell from memory without referencing the DC database or Wikipedia), set the scene in a "parallel universe" or hold their finger on the chess piece so they weren't making a real move and call it, "an imaginary story." When they wanted to let you know that a story meant business, the cover would boldly proclaim, "this is NOT an imaginary story."

Marvel created "What Ifs" and, more recently, "the Ultimate universe" as their own version of olly-olly-oxen-free.

But DC just relaunched and revamped everything they publish and they've wiped the slates clean -- sort of -- by starting all 52 of their current titles at issue number one, wiping out decades (and in the case of Action and Detective nearly 80 years) of comic book continuity from both imaginary and non-imaginary stories.

There were protesters at the San Diego Comic Convention, livid at Green Lantern, Aquaman, Wonder Woman, the Atom and Hawkman being liberated from the shackles of um, a dozen different origin stories.

Too many 'fixes' for comics junkie

Writer of the play Poor Super Man, Brad Fraser declared it was time for him to leap past collecting with a single bound. "Next week will be the first time I do not visit my local comic shop on a Wednesday and leave with a bag full of books since I was 10 years old."

In an email interview, Fraser told me that for him this is the last straw or, more accurately, the last multiverse. "There have been so many 'fixes' for a continuity any ten-year-old could figure out that I just can't do it anymore. Also, this relaunch, with the cancellation of some of DC's oldest and longest running titles, seems particularly cynical as they just relaunched most of the universe less than three years ago with the deadly stupid Infinite Crisis and many of the books being canceled haven't even reached double digits in the numbering yet. This feels like a short term money grab -- do they really think doing this is going to bring new people into comic shops?

I get Fraser's logic. A few years ago DC decided it was time for Bruce Wayne to "die" -- and anyone old enough to read comics knows "die" should always be in quotations. Dick Grayson finally took over the Bat-mantle. Batman's biological son -- and who knew that story was in canon? -- donned the Robin tights and I decided I could live without my monthly fix and stay tuned via "trade paperbacks" that collect every half dozen issues or so.

Unlike movie viewers who are expected to forget Batman and Superman's origins every decade or so -- and who accept that every new James Bond is only going to be a pale shadow of Sean Connery and that while the Daniel Craig movies are brilliant entertainment, they're not really Bond -- long time comic book readers can not only remember the origins of the Golden and Silver Age versions of each hero, they can tell you the origins of variations on these characters from 52 or more different Earths, how the variants are related and how many times each character inexplicably fought Superman to a standstill, or watched The Joker fall a bazillion feet to his certain, but absolutely unlikely doom.

I write this as someone who knows more about the history of Oa, Thanagar and Rann than the history of France and who can still rattle off the names and purposes of a half-dozen types of Kryptonite -- despite the fact that I was never even a big Superman fan. Do we have anyone else out there who remembers what Gold Kryptonite can do? Please, tell me I'm not the only one (besides Fraser) who spent too much time in my parents' basement as a kid...

And that's why I get that starting all the DC comics with new first issues isn't necessarily a comics event, so much as a news event.

Ever since "the death of Superman," comic book companies know that if they write a plotline that messes with the iconic nature of an iconic character it hits headlines around the world as late night comics and real live editorial writers debate the metaphorical importance of Captain America's death, Superman's citizenship or, my favourite, Batwoman's sexuality.

What I loved about the Batwoman story is that it sounds like it has zeitgeisty significance -- unless you actually read comics and know Batwoman is not the adult version of Batgirl (a character people actually know) but a revamp of an obscure character even comic nerds like me and Fraser can barely remember.

It's like Marvel's recent announcement that Spider-Man is black, sort of. Okay, he's just black in "the ultimate universe" which is where Marvel plays out their imaginary stories, but it sounded enough like news that the "new Spider-man" rode all the news cycles.

Inside the pants of steel

For longtime comic readers, new and vanishing multiverses are rarely that shocking. I don't doubt that with this new relaunch old characters are being reimagined in fascinating new ways by exciting new creative teams -- and I'm looking forward to reading a few books about characters I haven't cared about in years -- but I'm used to seeing these characters and their histories retrofitted and re-envisioned every time a hot new writer and artist takes over a series.

I've checked out the preview of the new 52 and as far as I can tell the single most radical shift is that Superman's underwear is now inside his pants, which means thousands of stand-up comics will have to lose yet another dated joke from their acts.

There's also a drawing where Superman appears to be wearing jeans and a Lululemon tank top -- which makes it tough to tell whether he's dressing for yard work or yoga.

The relaunch kicked off with Justice League of America number one -- which might be upsetting to old-time fans unless, like me, you're old enough to remember the last Justice League number one and the Justice League number one before that and the Martian Manhunter led Justice League featuring such unforgettable all-star heroes as Vixen and Vibe -- a.k.a. Paco Ramone, a Hispanic superhero whose powers consisted of the ability to cause shock waves, apparently by looking ridiculous in a disco outfit with a canary yellow V-neck cut down to his navel. He was the first JLA member killed in the line of duty because, I assume, writers and artists found the character embarrassing to write and draw.

Writer Will Pascoe, who is currently shooting a documentary about Canadian superheroes, told me his response to the relaunch is, "it's about goddamned time. Time to reboot and retool it. There are too many good characters that have faded a bit who could use a rediscovery by new audiences."

My personal comic book pushers at the Comicshop on Fourth Avenue in Vancouver are optimistic because new readers are requesting the revamped DCs and most DC diehards seem about as likely to walk away from their heroes as all those hockey fans who vowed they'd never watch another game after the strike.

So, other than the fact that I may have a tough time selling my back issues of Detective because it'll never hit issue 1,000, unless it re-relaunched again at the old numbers next year, the real significance of DC's new 52 is that it pushes every series into the iPad age... and those Justice League panels rendered on an iPad look pretty darn cinematic, which is high praise since the most expensive movies in the world are blowing most of their budgets aspiring to look just like comic books.