Go to Vancouver Media Coop for photographs from the demonstration and their view of what happened. Click here to read police press release. 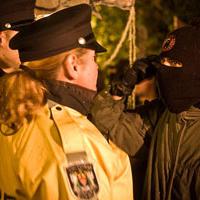 [Editor's note: The Tyee is pleased to weekly showcase the best of the Vancouver Observer, an independent, online source of news, culture and blogs whose motto is, "All local -- all the time."]

"Six arrested at G8 summit." Combing through Google, after typing in "protesters arrested G8 university summit," I find a page full of headlines that continues on to the next page. The news sources differ, but the headline is identical, from the CBC to The Province. The press release that inspired the stories originated from the bland headline: "Protest in Downtown Vancouver," sent by email to press organizations across Canada from Const. Jana McGuiness of the Vancouver Police Department.

"What began as a peaceful protest Friday afternoon ended with three men and three women being taken into custody by Vancouver Police after protesters tried to storm [my emphasis] the Fairmont Waterfront Hotel located at 900 Canada Place Way, in opposition to a meeting taking place inside," it read.

Like the other news organizations in Vancouver and throughout Canada, I posted the press release and tagged it "press release," then I posted links on Facebook and Twitter. Instantly, I got a reply on Twitter: "Is this a press release from the police?" I then tweeted a message, asking if anyone had a more complete picture of what happened.

Today, thanks to a Facebook contact, I talked with Harsha Wallia, an eye witness and participant in the protest. Wallia says she's in her late 20s and describes herself simply as "local activist." I asked her what happened. What were the protesters demonstrating for? What did they want to accomplish. What motivated them to get out in the streets and confront the police? First thing she said was that demonstrators never tried to gain access to the hotel. So, what really happened, she said, was this.

The march began at 3 p.m. on Friday afternoon and continued until 6 or 7 in the evening, she said. Eighty to 100 people had organized themselves in opposition to a G8 University Summit that was taking place at the Fairmont Hotel on Burrard. The G8 happening in June in Toronto is the meeting of the heads of state, Wallia explained. The G8 University Summit was called, in the protester's view, "to talk about the ways in which universities can continue to privatize."

What the protesters were protesting

The summit's agenda seemed aimed at deteriorating public education to the protesters. Its aim, in their view, was making education less accessible by "shifting the burden more onto the shoulders of students through debt, and partnering with some of the world's biggest corporations, many of whom have atrocious human rights and social records, like pharmaceuticals and defense companies, and mining corporations that have devastating environmental records," Wallia said.

"When you break down the summit, it's knocking out a path of neo-Liberalism and inaccessibility to pursue education. This was happening in Fairmont."

The Vancouver Courier previewed the meeting. "Presidents of world universities gather in Vancouver today and tomorrow (May 21 and 22) to prepare advice for their governments as Canada gets ready to host the G8 Summit in Huntsville, Ont. next month. The summit, held at the Fairmont Pacific Rim hotel, is co-hosted by the University of B.C. and the University of Alberta. It's the third G8 University Summit and the first to be held in North America," an unsigned article reported. It also quoted a news release from UBC president Stephen Toope: "Our G8 University Summit offers a chance to show that universities can be effective agents for change and that we have solutions to help communities all over the world take action to ensure a sustainable future."

"It was a handpicked group of students and politicians, presidents of universities. They were from the G8 countries," Wallia said. "For students who were concerned, it was a closed door meeting. The group of people that organized the counter G8 summits was a group of students and educators and community activists and youth involved in the community education system. They were union members concerned about privatization in other sectors as well.

"The demonstration was the latest in a series of activities. The week before, they had had a teach-in."

No one was there to 'storm': activist

The march started at the Vancouver Art Gallery, and then proceeded to the hotel. Demonstrators met a line of police in front of the Fairmont Hotel on Burrard by the Convention Centre, the activist said.

The police release stated that the demonstrators tried to gain access to the hotel. "That never happened," Wallia said. "There were heated exchanges between the protesters and the police. The cops put a big line in front of people. Every time people would move, they'd set up a line somewhere else. The march circled the hotel and went on the streets and told people what was going on inside. The goal wasn't to gain access."

The police provoked protesters, Wallia said. The protesters may have also provoked the police when they noticed a bus full of delegates parked near the hotel, and waiting to go inside to participate in the summit.

"The police kept reinforcing their lines and restricting movement, so people made a line and surrounded the bus and said, 'We are saying no to this bus. We're saying no to what this represents.'"

"It was an action of non-violent civil disobedience."

There were about 30 police in the beginning. The officers formed a perimeter around the bus and, Wallia said, "...started shoving their bikes into people, pushing people down, stomping on people's feet. Within 10 or 15 minutes, they brought in 40 more cops, more cops than people, and just charged everybody, mostly young women. They didn't say anything, didn't say 'Move.' They were dragging people in the street."

'Nothing justifies that amount of violence'

"I was thrown to the ground four times. Every time I'd get up and try to leave, they would throw me down to the ground. It was so scattered. There was a woman they threw off her bike and she landed on her arm and cracked it. Everyone is brutally bruised and sore. The cops threw bikes on top of people. They are claiming there was damage done to police equipment. I had two police bikes on top of me." Wallia ended up at the hospital later with a concussion. "It was really brutal," she said.

The march was a defiant one, Wallia said. "People were upset and as the police antagonized people, people didn't run away. As the cops threw down the person next to you, you didn't just walk away. It countered the environment of fear and intimidation that the cops want to instill. It was an environment of defiance. Nothing justifies that amount of violence. The police are armed to the hilt. They're inherently violent."

"It's reported as if the police are justified in pushing protesters away. I think people have to really question what justice and democracy are supposed to mean, in this case," she said.

Although the police arrested six people and took them into custody, ultimately they didn't lay charges. Police released everyone by 11:30 p.m. last night.

"There's nothing they can charge people for," Wallia said. "It was in front of the convention centre on a public street."

As to whether the protest accomplished its goals and sent a clear message to the summit's delegates, Wallia said, she hoped it had.

"I think they rely on a culture of apathy. This was not an apathetic moment."