South By Southwest is many things to many people. 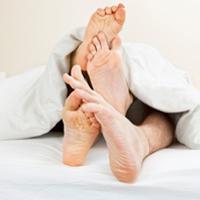 Sex on Their Brains

It is a chance for tech company men to pitch products and services to equally well-heeled attendees flinging their own business cards at daytime trade shows with open bars. It's the best place in the world for music fans to hear all their favourite bands from the outside of venues because everybody is somehow always 700th in line for everything.

Still, the annual 10-day conference on technology, media, comedy, film and music is a wonderful mess that fills the streets of Austin, Texas with hordes of bright go-getters -- crowds easily as large as those that spilled into the streets of downtown Vancouver during the 2010 Olympics -- served and entertained by speakers, workshops, screenings and performances and supported by armies of costumed and tattooed bicycle rickshaw drivers, caravans of food trucks and never-ending volleys of free schwag, beer and music.

It's also where I began an unexpected investigation into the female orgasm.

The nun that gets some

It geared up to be just another daytime presentation in a conference room at some downtown hotel reasonably close to all the others. But then the speaker walked in -- Nicole Daedone, the smartphone app informed me; a smiling blonde in a sleeveless black outfit, flanked by a brunette who was, according to the message printed on her T-shirt, Powered By Orgasm.

And then it got really interesting: Daedone started into a story of how she was training to become a Buddhist nun until a stranger at a party suggested she undress from the waist down and butterfly her legs open, while he sits to her right and strokes the upper left quadrant of her clitoris with his forefinger for 15 minutes and then maybe they talk about it. What was almost certainly the world's least subtle pickup line didn't only work as planned, it has since turned into OneTaste, a company dedicated to orgasmic meditation -- OM for short -- Daedone's raison d'être since 2001.

The Nun That Gets Some, as she called herself, described that night of random digital stimulation as an intense spiritual encounter, her first glimpse into a world of pleasure and beauty she had no idea existed.

"I was immersed in an entirely different place, I felt that feeling of being connected to everything," she said. "Then it closed. But then I knew I wanted to live there."

I always thought real estate would be the thing to sell, but she made orgasm sound pretty good too. And while some in the room had already decided to buy every drop of whatever potion this Californian seductress was flinging, the pitch continued, retooled through different lenses to enchant non-believers: No side effects! You know slow food? This is slow sex! A sober blackout! Elevates orgasm to an art form! Let's build this limbic Internet around the planet, each of us a router! It's at your fingertips!

By the time she finished, entire rows of listeners were in their own private reveries, some using iPads to hide awkward partial erections. Daedone was immediately swarmed by people dying to learn more. She answered as a savvy businesswoman might, telling us of books, videos and classes: OneTaste just opened a satellite location in London, two more are planned for Paris and Copenhagen and some 130 more teachers are in training and coming soon to a commercial area near you.

Business started booming after the New York Times took interest in 2009 and Silicon Valley angel investor Tim Ferriss mentioned Daedone in his 2010 bestseller The Four-Hour Body, which described her as a student of experimental group-living community Lafayette Morehouse and as someone wanting to "give women a clean and brightly lit place to learn about orgasm from another woman."

She fielded a few more frantic questions, after which I followed a medium-sized mass of zombied attendees outside to drink beer and play immature word association games about what the hell just happened and what the chances were that orgasms were that easy.

An orgasm a day keeps the doctor away

Dr. Pooja Lakshmin is a woman on a mission to bring OM to the medical community. At 29-years-old and barely out of residency at Stanford, Lakshmin is a new addition to a research lab at the psychology department of Rutgers University in Newark, NJ, which has long been studying orgasm under the tutelage of professor Barry Komisaruk, whose 2004 paper in Brain Research found the presence of a functional sensory pathway between the vagina and the brain that completely bypassed the spinal cord. I'm told that was a pretty big deal. Since then, Komisaruk has been looking to re-imagine the orgasm as something more than the purely physical experience described by pioneering American sex researcher Alfred Kinsey in the late '40s and early '50s.

"Of course," she answers plainly. "I do the practice everyday."

"It just blew me away," she says. "When I first came to it, it was more about looking for something sexual, because that had been what had gone wrong in my marriage. But it's actually something that gives such deep connection with another person. Deep intimacy. It's a spiritual place. And I hesitate to say that because it puts me in an awkward position as a scientist."

Simply put, an orgasm has health benefits, she says: better sleep, more energy and, perhaps most importantly, elevated levels of oxytocin, a neuromodulator hormone important in arousal, bonding and maternal behaviour, but recently also championed as a social lubricant the likes of which you've never felt before.

"The limbic system has been pooh-poohed as not important because it's so widespread, there's so many different structures," says Lakshmin of the area of the brain that produces oxytocin. "When I'm totally surrendered it feels like tripping on acid," she says, before correcting: "It is what I imagine tripping on acid would feel like."

"It's not a cult," she reassures me, sort of. "It's a group of people, a community really, that is trying to change the way the world sees connection."

Sex ed for the semi-converted?

Still skeptical, I throw a Hail Mary at Vancouver's sex experts and luckily Maureen McGrath is delighted to chat. She's a registered nurse and sexual health educator who sees some 50 people a week at her private practice and advises thousands of others via group sessions and the CKNW Sunday Night Sex Show, a weekly program she hosts at one of the local talk radio stations not currently in the crosshairs of the Harper Government's shakedown of Crown corporations. McGrath is familiar with Daedone's work, but thinks she may be torquing things a bit.

She also congratulates Daedone for the brilliant idea of remixing basic sex education and behavioural therapy techniques (being in touch with yourself, your genitalia, being in the moment) to appeal to the book-buying, class-taking, semi-converted White Whine lot starved for better, more meaningful sex -- but sees it more as a successful business play than a psychological breakthrough.

She agrees the clitoris is the most important part of this narrative.

"Only 30 per cent of women are able to orgasm with penetrative sex. It might be a little bit of a secret that clitoral stimulation is what is required for most women to orgasm. So that's another piece of this."

But then things get rapidly more complicated.

"Do you know what the female sexual response cycle is?" she asks.

"Yes?" I ask back, praying for no quick follow-up while I google my way out of the corner.

"Well, there's a couple of versions," we tell each other, she, guided by years of practice and determined to teach, and me faking it via whatever crowd-sourced encyclopedia entry I've made my impromptu teleprompter.

There's the classic linear model developed in the 1966 William Masters & Virginia Johnson book Human Response Cycle, which coined the term and described it as a four-stage progression through phases of excitement, plateau, orgasm and resolution. But there's also the newer, non-linear model of female sexual response developed in 2001 by Rosemary Basson, a clinical professor in the department of psychiatry and director of the sexual medicine program at the University of British Columbia. The latter presents a more complicated feedback loop between sexual stimuli, arousal, emotional and physical satisfaction, emotional intimacy and spontaneous sex drive.

And speaking of sex drive, that's all over the map too. The groundbreaking PRESIDE study (Prevalence of Female Sexual Problems Associated with Distress and Determinants of Treatment Seeking), published in 2008 by a team of American and German researchers in the journal Obstetrics & Gynecology, collected cross-sectional population-based data from more than 30,000 U.S. women and found that while 43 per cent of respondents self-reported a sexual problem of some kind, just 22 per cent were bothered by their lack of desire, arousal or orgasm.

"A lot of women have been socialized to service the man or please the man. So women don't enjoy sex," says McGrath. "Religion comes into play, education comes into play. Past experiences, trauma, violence against women, sexual abuse all play a role in women's sexuality."

She concludes with a plea for more sexual health educators.

"I speak to 20-year-olds and 80-year-olds and they all have the same questions. Except for one thing: the 80-year-olds know they can't get pregnant, so they're not interested in any information about that," she says with a big laugh. "But if you don't know what's happening to your body, you're not gonna understand how to get your body to experience something either."

Knowledge, after all, is power. With this in mind, I'm tempted to pitch orgasmic meditation as an ice breaker next time I find myself tongue-tied at a party. In the name of research, of course.