The latest consumer item to be downsized this recession is breasts. It's not just that fewer women are shelling out ten grand for a pair of silicone cups, but that some women are going under the knife to have large implants turned into smaller ones. 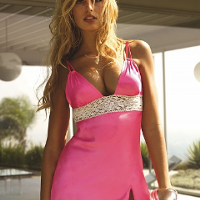 The Daily Beast has a gallery of celebs who've remodeled their busts, called "A-List B-Cups," with the most high profile case being that of Victoria Beckham. Most people agree she has had three surgeries (though she denies it), and her most recent change was from a 34DD to a 'more manageable' 34B. Tabloids report that everyone from Lindsay Lohan to Drew Barrymore to Jennifer Connelly is diminishing her dimensions.

There are a few theories as to why women are going down to get a leg up. The first is specific to A-list circles -- many celebs are migrating to the fashion industry and appeasing the 'size zero demands' of its fickle and demanding god. As the UK-based Sun wrote, when Beckham first appeared with her new, smaller orbs, "Posh, 35, felt her mega chest didn't fit in with her new role as an upmarket fashion designer. A source said, "Victoria has wanted her implants taken out for a while. She felt that was part of her old 'WAG' image -- the big hair, big boobs, fake tan -- and that she has moved on since those days."

In the article 'Is downsizing one’s boobs the new Hollywood upgrade?' the Frisky blog says, "We're not sure which is worse -- women feeling the pressure to get implants, or feeling like weirdos if they're not an A- or B-cup? Could this have anything to do with all the celebs that are moonlighting in the stick-figure-dominated fashion biz?"

But I know several non-celeb women who're also contemplating getting reductions, and have heard even more people, of late, discussing how ridiculous oversized implants are. So this isn't just about a few irrelevant Hollywood starlets flirting with fashion.

A friend of mine has a theory. Her three friends with implants are all miserable, because each ended up with bigger implants than they wanted. All asked for B- or C-cups, but the surgeons, supposedly wanting them to feel sufficiently transformed, (and feel like they got their money's worth) pushed them into getting D-cups. Now all three feel like they have porn boobs, are self-conscious, and want reductions. My friend suggested implants have been around long enough that the initial thrill of them is over. And that because enough women have complained to their friends about being pressured into a 'one (oversized) size fits all' approach, women are now starting to demand what they actually want, or are getting them changed into what they wanted in the first place.

A male friend had another theory. He suggested that people are finally catching on to the fact that the implant craze was entirely manufactured. That most men like natural boobs, regardless of size. And that the silicone is leaking out of cosmetic surgery's once successful advertising campaign promoting 'bigger and better'. Like most men I know (is this abnormal?) he says he prefers small, uneven, or even slightly saggy natural ones to perfect fake ones. And let's just say the long description he gave me of his wife's small, imperfect, post-breastfeeding breasts, was convincing.

All of that makes sense, but perhaps another deflationary pressure is the fact that conspicuous consumption of all kinds is getting the cut, be it DD boobs or brand-name outfits. Large implants have always looked like, well, implants, and that kind of 'bling' is as outdated as the word itself. For the moment, modesty, not excess, is in vogue, and some women are changing their bodies to suit.

Women have always starved and fed and exercised their bodies into different forms, according to the demands of culture. From making ourselves Rubenesque several centuries ago, to pear-shaped in the flapper days, to voluptuous like Marilyn Monroe and the fictional Joan Holloway of Mad Men, to rail thin in the heroin-chic model heyday, our bodies have been seen as clay, and many of us have agreed to sculpt ourselves.

Anyone who criticizes women for it -- even for getting implants -- doesn't understand how powerful culture is.

But if the ideal is now for women to surgically change their bodies every few years to conform to the whims of fashion, I'm pretty sure that's part of the dictionary definition of escalation. I heard someone the other day talking about how disgusting he found the disfiguring and painful trend of Chinese foot binding. Um, how is this different?

Feeling sexy is fun; feeling beautiful and attractive is pretty awesome. But knowing that women feel the pressure of going under the knife, at great pain and expense, on a regular basis to experience those things? That's a joy killer.

Where have we landed here? Economists used to muse that the confident mood of the nation's consumers rose and fell with hem lines. Are we in an age of such artificial adjustments to the body that one can gauge where society is headed by the breast sizes most commonly pushed by plastic surgeons?