Could it be that being childfree will ever be as legit as being a parent? That breeding could be seen as a choice: zero, one, two or even eight kids. Or even, like being gay, be seen as a matter of brain wiring, and not a sign of deviance or bad judgment. 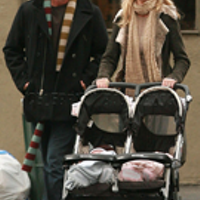 No Baby For Old Men?

Why does it matter? I get asked at least once a week whether I'm having kids. (My male friends don't, but that's another story). Other childless friends, who also get asked, say that when they answer that they can't have kids, that they've tried, that they've spent their retirement savings and house down payments on fertility treatments (and subjected themselves to hormone treatments, torturous procedures and endless needle jabs) people respond with awkwardness and pity, and emphatically tell them what else they must try.

But that's nothing like the friends who say they don't want to have kids. They're openly judged, even derided, then subjected to intense lobbying efforts and proselytizing.

When the thing is, even though there are great reasons to have kids, there are arguably far more reasons not to. In fact, it might be a better idea to be cautious towards people who want to breed, and actually grateful to the people who abstain (even though the desire to breed is understandable, of course). If childlessness (or "childfreeness," as it's now often referred to) were seen as a positive choice, and not an expected act or an essential part of female identity, everyone (including parents) would benefit.

Interest in the topic is breeding (sorry), like in Maclean's magazine this week, for example. "The Case Against Having Kids," outlines extensive scientific, psychological and anthropological research that concludes childfreeness is a better choice for individuals and the planet.

But the most provocative and furor-inducing contribution on the topic is the book, No Kids: 40 Good Reasons Not to Have Children, by Corinne Maier, released last year in France and coming out this week in North America.

Maier, the mother of a 14- and 11-year-old says if she could make the choice again to have kids, she's "not sure" she would (inciting the most pernicious slur that can be slung at a woman, of course: "bad mother.") But she says that given her status as a mother, she feels compelled to speak out. If she were childless, she argues in the book, her offering would be dismissed as nothing more than the ranting of a bitter, childless woman.

In the introduction to Maier's manifesto, she says she was prompted to write No Kids after a conversation with friends (over several glasses of wine -- hey, this is France) who told her they felt like social deviants because they didn't want children. "It's acceptable for women to delay having a baby," she writes, "but to refuse to? No way!"

But Maier says everyone should "take warning from France's example" of going from the least to the most fertile country in Europe. In France, raising the birth rate became an urgent national identity crusade, but has lead to nothing but negative results.

She writes: "The truth is the more your fecundity increases, the fewer there are of you who can call yourselves happy... Becoming a parent means giving up everything else: your life as a couple, your leisure time, your sex life, your friends, and if you're a woman, your career success."

Maier goes on to list 40 reasons to abstain from breeding, including the fact that childlessness means more sex. She says parents have less fun, fewer friends, and unhappier relationships. They have less money, less successful careers (especially women) and less time or energy to be creative or fulfilled. She says that parents today are held hostage by experts, and by the expectation that they be Superman or Superwoman at all times. "The education of children has become a sacrament: society demands of parents [that they be] always on call, smiling, attentive, teacherly and responsible." She says having children forces you into a life of conformity, and that kids are invariably disappointing. That you go from being a person and an individual to a bored slave. "Children are a pain in the ass."

Maier also argues, as many others do, that children are the worst thing we can do to the environment. "Listen, your marvelous babies have no future because every child born in a developed country is an ecological disaster for the whole planet."

Her conclusion: "Take the necessary precautions... the only solution is contraception."

Whether her manifesto will lead to a lower birthrate is debatable. But if her work somehow fertilizes the idea that breeding is an option, and that childlessness should be celebrated, it could lead to the birth of a whole new range of identity options and possibilities for women, men and the planet.