Nettie Wild’s groundbreaking film FIX: The Story of an Addicted City was made 20 years ago. It shares some interesting commonalities with Colin Askey’s new documentary Love in the Time of Fentanyl.

Winner of the Colin Low Award for Best Canadian Director at this year’s DOXA Documentary Film Festival, Love in the Time of Fentanyl was described in the jury statement as “a film that depicts an urgent crisis with compassion, empathy and most importantly centres the strength and care of the community of the DTES.”

It is interesting to watch both FIX and Love and see how little and how much has changed in Vancouver over two decades. In FIX, late Vancouver Mayor Philip Owen is an active part of the story. Owen is remembered for taking a different approach to drug use in the city, adopting the Four Pillars drug strategy that advocated for harm reduction. While drug user advocates Dean Wilson and Ann Livingston carry the bulk of the narrative in Wild’s film, Owen is an empathetic presence throughout, lending his political weight to VANDU, the Vancouver Area Network of Drug Users.

Owen arguably staked his mayoral career on supporting the creation of Insite, the first legal safe injection site in North America, perhaps to the detriment of his political ambition. But there is no mistaking his commitment to the issue.

In contrast to FIX, Vancouver’s current city council and Mayor Kennedy Stewart appears only once in Love in the Time of Fentanyl, when organizers and staff from the Overdose Prevention Society present the reality of what they are contending with to the city. The city councillors listen to OPS, offer sympathetic expressions… and that’s about it. It’s a telling moment, perhaps because it is so brief and, on the part of the politicians, almost perfunctory.

While political will or at least talking points have waxed and waned over the years, one thing that has changed is the scale of the problem. Although heroin is still around, a toxic drug supply fuelled by fatal quantities of fentanyl, carfentanil and benzodiazepines in street drugs has been killing people at record-breaking rates since B.C. declared a public health emergency six years ago.

Film director Askey worked for 10 years in the Downtown Eastside before moving to New York City. As a familiar face in the community, his intimacy with the people on camera allows for a nuanced portrait of the place and its staff and volunteers.

The film takes a decidedly observational approach in letting the action simply unfold as the camera hangs back. Sometimes things are chaotic and others quiet and contemplative. In interviews, Askey has been forthcoming about the necessity as well as the intricacy of navigating people’s consent to be filmed.

Given how many films have been made in the community over the years, some with not the clearest of intentions, this is an important part of Love. Askey’s dedication to ensuring that the humanity is seen in the people who staff, run and frequent the Overdose Prevention Society lends the film a depth that few others, with the exception of Nettie Wild’s work, have achieved.

Established in 2016 to respond to a sudden spike in opioid overdose deaths in the city, the Overdose Prevention Society’s mandate is “to be leaders in the harm reduction movement with a continual push for change and justice, offer employment and advancement opportunities for members of the Downtown Eastside community, and continually work to break the stigma of addiction through empowering drug users and fighting against preconceptions of substance use.”

Although not sanctioned by the city at the time, the site offers necessary care. Even more critically, it is a place of community, friendship and support. OPS volunteers and members are often the first people on site when immediate help is needed.

To frontline the work of the OPS, the narrative is carried by a small group of committed people. At the centre is Ronnie Grigg, a bearded giant of a man who forms the beating heart of the place. The practicalities of operations run the gamut from the mundane (cleaning and paperwork) to the most heartbreaking (ensuring that people don’t die). Some of Grigg’s work involves training people on the proper use of Narcan, hence his nickname: Narcan Jesus.

The scenes where he talks openly about the impact of burnout on people who have worked long-term in the community are among the most insightful but also painful. But as Grigg explains, the toll of witnessing so much death up close exacts a brutal toll. You can only do it for so long before you need to do something else for a time. By the end of the film, he makes a decision about his role in this work.

Sometimes a backstory is given for the people featured, other times not. But certain details hit with an emotional weight all the more profound by being offered in a matter-of-fact fashion. A case in point is Trey Helten’s story about his mother, fighting two different kinds of cancer, who tells her son that she simply wants him at home so that she can sleep without worrying about him overdosing.

Helten recounts his and his family’s struggles while on a cross-town journey to deliver a motorized wheelchair to a friend who is in the hospital. A promise to get a Denny’s milkshake for his buddy is so gently offered and so innately kind that it takes your breath away.

This is the aspect of the film that is most powerful. Throughout the noise and chaos of the DTES, it surfaces plain, simple human kindness, no matter the circumstances. This is not to diminish the work that goes into creating a space where people can be whoever they are without judgement, but to make clear how much ongoing effort is required.

In creating this kind of community, Grigg is joined by a number of other folks, including Norma Vaillancourt, an Indigenous Elder with sweet demeanour and a wild way with karaoke, and Dana McInnis, a non-descript guy with a prodigious talent for whistling. In addition to the people themselves, the artwork of Smokey Devil, whose street art eulogizes the many people lost to overdoses over the years, adds another layer of connection and tough beauty.

While the gravitational pull of ongoing tragedy permeates the film, it doesn’t overwhelm it. Quite the opposite. Halloween celebrations, crazy dance parties and extended conversations about the problems with the new Star Wars film all offer a nuanced and, most importantly, balanced look at a group of people working together. Some use drugs, others don’t. So what? 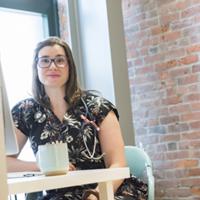 ‘I Want Them to Break Up with Their Drug Dealer’

But some of the zippy militancy that fired up FIX seems to have vanished in Love. There is a street parade and a small rally on the plaza of the Vancouver Art Gallery, but the overall tenor of the film is more subdued. It’s freighted with the weight of terrible grief that seems to have no immediate end.

It’s this aspect that is the hardest thing to take — lingering long after the film has ended. Despite having a number of examples of how other cities have dealt with drugs, Vancouver has refused to implement any truly effective solutions. Meanwhile, people continue to die, parents mourn and the triage-level services offered by the Overdose Prevention Society continue with little in the way of actual support from the city.

I’ve lost track of how many films have been made about Vancouver’s Downtown Eastside. Suffice to say there’s been many. But Love in the Time of Fentanyl is painfully relevant, not just because the death toll has continued to rise with the toxic drug crisis, but because the people who are fighting to save their friends and their community seem so much more fragile.