Just 20 minutes before he was stabbed to death, Thomus Donaghy had saved a life at the overdose prevention site at St. Paul’s Hospital in Vancouver.

“He was working alongside a brand-new staff,” Rachel Plamondon, who works as a manager at the site, told the group gathered at a memorial on Monday.

“He came alongside and made her feel comfortable enough to be there and respond to the overdose.”

Donaghy’s friends and co-workers came together to remember a man who had devoted his life to saving the lives of others, but who lost his own while doing the work he loved.

They recalled how he loved skateboarding, soccer, hockey and playing video games. How he put people at ease by laughing at himself. How he named his two cats after his favourite beer — Molson and Canadian. How he had a special love for animals and adopted the cats that no one else wanted because one was blind and the other was lame.

Donaghy was hearing impaired, but speakers remembered that as his “superpower.” While others might be distracted by a chaotic environment, Donaghy would remain focused on supporting clients and reversing overdoses at the site.

And they spoke about their shock and anger at the way he died, in a violent altercation outside St. Paul’s Hospital on a warm summer evening as he took a break during his shift.

Police have not yet identified a suspect but say Donaghy was stabbed after getting in a fistfight with another man.

“My friend Thomus Donaghy, 41, was murdered on July 27, 2020, when he took a break from his shift, doing what he loved working tirelessly at the St. Paul’s OPS,” said Trey Helten.

“I ask that anyone who has information about this homicide, please come forward and help the Vancouver Police Department with their investigation.”

Friends and co-workers have described Donaghy as a peacemaker, a kind person who went out of his way to help, and someone who would stand up for others.

Grigg recalled how Donaghy called him in the middle of the night when activists and homeless people occupied an unused building at Lord Strathcona Elementary School in April to highlight the dire need for housing.

Grigg said that at Donaghy’s urging he walked down to the school and stood with him to witness police actions during the incident.

“He was one of the most compassionate, caring,” said Sarah Blyth, one of the founders of the first overdose prevention site in Vancouver. “He was the kindest person, and people looked to him as a leader in kindness.”

Helten recalled how he met Donaghy during his first training shift at the Overdose Prevention Society in February 2018.

While two sanctioned injection sites were already operating in Vancouver in 2016, and had been for years, it had taken a long time to get approval to open them.** Blyth and other community activists didn't wait for permission to open their site, quickly staffed with volunteers trained to administer the overdose reversal drug naloxone. Since the site opened in the fall of 2016 it's become a model for other sites across North America.

As he did for so many others, Helten said, Donaghy made him feel comfortable as he started working. Donaghy was one of the first volunteers to work at the site, and he never lost his passion for the work, Helten said.

“He was passionate about saving lives — so passionate that he would often imagine hearing people screaming for help, immediately dropping whatever he was holding, grabbing the nearest oxygen tank and running down the alleyway into the dark,” Helten said.

Grigg added that the “problem” with Donaghy was that he worked too much, often finishing a shift at one site and showing up at another, ready to work. 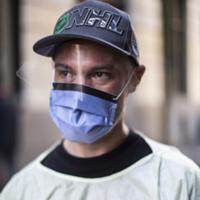 At the time he died, Donaghy worked shifts at the overdose prevention site at St. Paul’s Hospital, operated by RainCity Housing, and the Molson and Maple sites on East Hastings operated by PHS Community Services.

Overdose prevention sites have been heralded as a key lifesaving measure during a tainted drug crisis that has killed over 5,700 people since 2016.

Deaths had been dropping before the COVID-19 pandemic. But with services closed, an increasingly tainted supply and more people using drugs alone, the death toll has again spiked, setting new records in May and June. 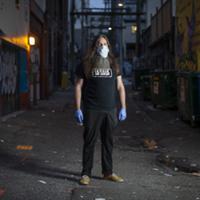 We Should Also Be Cheering These Frontline Workers

Donaghy was a peer worker, an overdose prevention site worker who has lived experience as a drug user, and has special insight allowing connection with prevention site users.

Workers like Donaghy are usually not unionized and are almost always paid less and have fewer benefits than unionized staff.

Plamondon said that needs to change. Workers like Donaghy are the backbone of overdose prevention sites, bringing hard-won expertise that lets them reach vulnerable people who might otherwise die alone.

“They don’t get the recognition they deserve,” she said. “They’re the first responders.”

*Story updated on Aug. 4 at 10:50 a.m. to correct our misstatement that Ronnie Grigg works at the Overdose Prevention Society. He does not.

**Story updated on Aug. 4 at 9:45 a.m. to clarify that two supervised injection sites were already operating in Vancouver prior to 2016.